The Taste of Red

by Emily Keeler 29 days ago in relationships 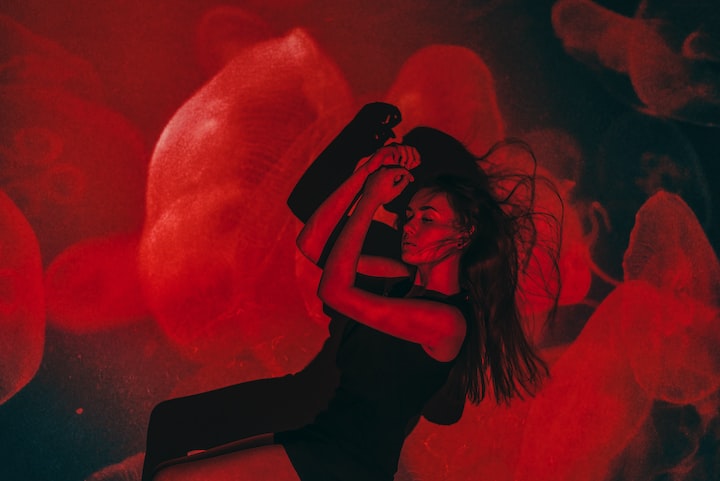 Photo by BRDNK Vision on Unsplash

The pain in your shadow made my heart stop.

There you were, framed by pale slants of moonlight in your window, your body a tight ball in the empty room. You stayed there, curled up like a rock that had been dropped into the ocean; as if you had simply sunk into that room and stayed there for centuries.

You gripped yourself like a precious stone that was falling apart. Your arms wrapped around your shoulders, fingers reached to clasp onto the blades of bone in your back. Through the window, I watched as you pulled yourself together through the force of your palms. I watched, as you cradled and rocked yourself under the sigh of the moon.

I turned on the light in my own little office. It felt wrong to watch your pain. I looked at the stationery set, stagnant on my desk. It felt worse to ignore it.

I had bought the stationery set at the beginning of the pandemic. I had told myself, I would write to friends and loved ones – that was before the exhaustion had set in. It wasn’t long before I could barely muster up the energy for a video call.

The shadow of your body lurked in my mind, though.

My fingers twitched before I sat down and started to write.

Harrowing headlines echoed in my mind. My own loneliness wrinkled under my skin.

For months, I had denied myself the catharsis of being lonely. I had convinced myself that if I ignored the loneliness, it would mean that I wasn’t actually alone.

Dear Stranger in the Window,

I am the woman in the window next door.

I hope this isn’t too weird… I mean, what isn’t weird these days, I guess?

Your curtain was open the other night and I noticed you there. I realized I’d never gotten the chance to say, “Hello.” I realized, in another life, we might know each other.

I didn’t want to wonder. I’m tired of wondering about some parallel life. I wanted to reach out and see if maybe you were sick of wondering too.

I guess what I’m trying to say is… Hello.

I decided not to read over the note before folding it into an envelope. I taped it shut with a shudder at the memory of saliva-coated paper in tin mailboxes.

After I'd left the letter at your door, I started to keep the light on in my office. Even on the nights that I stayed in my bedroom, or puttered in the kitchen, I kept the office light on. I hoped you would remember that there is a community of people around you. I hoped that it would remind you that you are seen, that you still exist, that you are important.

I hoped that you knew that your existence was more than that of a rock at the bottom of the ocean.

A week had passed by before I received your response in the form of a sturdy cardboard box on my doorstep. On the side of the box was a sleek black circle with three wine bottles in the center. In neat lettering read, Bright Cellars - Discover Wine You Love.

I couldn’t help but smile. There was something warm but solitary about the name that reminded me of my own life, these days.

The more time I spent in the cozy lamplight of my room, the more I felt like I was living in a bright cellar of my own. The walls around me felt safe and familiar; the light inside my home felt warm, like the first sip of wine as it settles into your chest.

My breath felt lighter as I noticed the small envelop that rested on top of the gift: Dear Woman in the Window Next Door.

I laughed and resisted the urge to tear the letter open before I had even stepped inside.

After setting the box in my office, I slowly peeled the tape from the body of the envelope. I drank in every word,

Sorry – I know, I could have just written “Cara,” but what fun would that be?

A smile spread through my body as I kept reading,

Your letter was the first one I’ve gotten in ages. Even before the pandemic hit, people never really reached out. I’ve been living here for three years and you’re the first neighbor to introduce themselves.

I don’t want to be strangers.

I sucked the air deep into my lungs as the words washed through me.

I hadn’t realized how desperate I was to be seen, either.

There is enough isolation in this world. Here is my phone number, in case you ever want to share a glass of that wine.

My heart rushed like a schoolgirl headed to her first slumber party. Has it really been that long since I’ve made a new friend?

That night, I pressed the tiny numbers into my phone before flicking on the light.

When you picked up, your voice was tight – like it hadn’t been used in days. It cracked as you said my name, “Cara.”

My vocal cords wavered as they shook off their own rust. I laughed nervously, “Thank you for the wine.”

You responded, “Thank you for the letter.”

My nerves tingled against the static-like anticipation in the air. It was Nat who broke the silence, “I’m sorry – I’m so awkward around people, now. It’s like I forgot how to socialize.”

I smiled, “Me too. I was bad at talking to people before this happened, but now I’m just a disaster.”

“In your defense, I started watching you first.”

You laughed, “Ok, but to be fair, you can’t actually see me. You keep your light on all the time – it’s like a fishbowl! I can’t help but watch you!”

If you were a rock in the ocean, I was a figurine in a fishbowl; either way, we were both choking on water.

It felt good to be each other’s breath of air.

You continued, “I loved to watch you write. People don’t really get to see writers in action – it was like you were measuring the weight of each word; as if every sentence was a string of choices.”

You said, “I started to wonder what you might be writing about. After a week of watching you through the window, I wanted to try something… there’s this quiz online you can take that will match your personality with four bottles of wine. I tried to answer them as if I were you. I imagined how you might respond to each question.”

You laughed, “Yeah, the box. Anyways, I ordered two, one for me and one for you. Go ahead, and open it. Tell me how I did.”

My skin heated up as I pulled a cool, dark bottle from the case. The black and white label featured a bear and the name, Mojave Rain. Deep red merlot flowed from my bottle until crimson kissed the wineglass’ hips.

When I turned back towards the window, you were no longer just a shadow.

Light flooded the room across from me. I stepped closer, just to get a better look at your eyes. They shone, like the reflection of the sun on the moon itself.

You held up your own bottle of the same wine. Your face went flush, “I wanted to know if the wine would taste like the words you wrote me.”

I brought the glass to my lips and drank, your eyes drinking in mine as the wine washed through our nerves.

You asked, “Have you ever heard of skin hunger?”

My own skin tingled.

You asked, “You know that feeling when your body craves human skin? When your nerves long to feel the electricity of another person’s touch?”

I could feel every vein filled with hot blood inside my body.

You paused. “It’s interesting, how our sense of self can hide in another person. Lately, it feels like we are all stuck grasping for each other, with no way to actually reach each other.”

My heart picked up as your hand reached for the windowpane. I imagined the breath that would be on my ear as you whispered, “Your words reached me.”

You asked, “Can I try and reach you?”

I swallowed the lump of air in my throat before I took another sip of wine. I traced my index finger around the mouth of the glass before letting it drip down the curve of its body.

Your fingers mirrored mine as they began to trace your own curves.

I whispered, “Does your skin taste like Mojave Rain?”

Your breath was a skipping stone in my ear. Your mouth was wet, like the water that once consumed us.

You were never a rock at the bottom of the ocean. You had always been a siren, had always been a creature of the seas. Your voice navigated the waves between my legs, the blossoming coral hiding in those sacred parts.

We went to unexplored depths and came up gasping.

My abs ached sweetly and my skin shone with dew, as the sun outside began to crown the sky.

I closed my eyes as my voice crept into the weightlessness between us, “Imagine that we’re on the beach. We are tangled in each other, wrapped in towels and blankets. There is nothing but you, and me, and the sun, as it washes over the ocean.”

When you spoke, your voice sounded like the first ray of morning light creeping over the clouds.

You whispered, “What a perfect first date.”

I eyed the box of wine, forgotten on the other side of the room. I walked over and picked up a different bottle. I smiled, “And here will be our second.”

Note from the Author

Thank you for reading my story! I appreciate you taking the time to consider my words. If you enjoyed this article, you can let me know by adding a "heart," or by reaching out to me on Instagram at @emkeels!

If you want to support my writing, check out my author profile for more articles, thoughts, and short stories. Tips are never an obligation, however, they are always deeply appreciated!

Thank you again for your support. I hope this piece made your day a little brighter.

Hello! Welcome! I am a 25-year-old, writing from Ontario. I write blog posts and short fiction. Thank you for stopping by! Enjoy!

See all posts by Emily Keeler →