AB
by Aiyda Blackshear 26 days ago in humanity 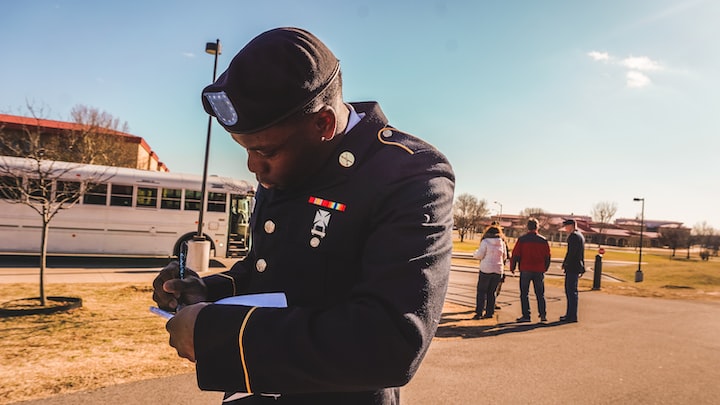 This night I was walking down MLK passed St. Barney's Academy when I heard a voice say "Hey, how are you?" I turned to look and a fine ass man was standing in the steps of the school. Chocolate brown with a thin goatee, violet contacts and a killer smile. "Hi, I'm good." I say back to him and he comes down the stairs toward me. OMG I'm thinking, damn this brother is fiiine and he wants to talk to me? I'm getting nervous as he approaches but he smiled and said, "I'm Johnathan, and you are?" I blushed and gave him my name. He said he had seen me walk by a couple of times this week while he was on duty at the school. "Yeah I go to school next door," I told him, almost embarrassed that I was still a student. He looked surprised too.

"Oh you're in High School?" he said "Yes, I'm a senior." You could see a sigh of relief come over his face. "So can I call you?" I gave him my beeper number and told him to beep me when he got off work. We smiled at each other with the look of "Yes I think you're sexy" and I continued on to the bus stop. All the way home all I could think of was Johnathan. How handsome he was and how crazy he actually liked me back! The contacts were a bit much but to each his own. I planned to get to know him well enough for him to let me see the real him behind those eyes.

I got home and hurried through dinner so that I would be ready by the time he beeped me. 8pm came, 9pm, 10pm passed then about 10:30pm I get a page from an unfamiliar number. I thought, "It's him!" so I called it back but it was my girl paging me to ask if I had done the chemistry homework. "Girl who's number is this?" "I'm at Bilal's house cause his momma ain't home!" Bilal attended St. Barney's Academy. "Well ask him if he knows a security guard at his school named Johnathan?" I held on while she asked. "He said no and why!?" I laughed and answered, "No reason and mind your business!" So now my girl is curious, "You gotta at least tell me." "I know, I'll tell you in chemistry tomorrow! Do your homework! Bye!" She laughed and said goodbye. I was anxious now. Why hadn't he... Beep Beep Beep!

I rushed back to the phone to call him back. "Hey pretty girl..." His voice melted me and I couldn't help but smile again. We talked for hours. Every one in my house was asleep and his grown ass lived alone. I was so happy things were going so well and I couldn't wait to see him again. "Well let me let you get some rest pretty girl, I know you gotta be up early. Can I kiss you tomorrow when I see you?" Well damn he was reading my mind! "Of course. Just beep me when you get to work and I'll let you know when I'll be walking by." "I'm there from 3-11 baby girl. Whenever you're ready I'll be there. I just want my kiss." When I got to St. Barney's that evening Johnathan and his fine self was waiting at the top of the steps, he gestures for me to come in and I don't know why I looked both ways down the street before I began the climb. Once inside he walked me to a little room and as I turned to face him he grabbed my face and began kissing me!

We kissed for what seemed like forever and finally he couldn't take it anymore. He turned me around and began to unbuckle my belt. "Whoa, wait! Not here Johnathan." He was so disappointed but I made him wait 3 more weeks until we were in that position again. This time was a Friday. He beeped me after work as usual. This time I was ready to hop on a bus across town to see him. Weirdly he lived in the house right at the bus stop that I needed to get off at. I rang the doorbell and he came downstairs to get me.

We laid on his bed for a while and talked about how sexy we thought each other was and how we would make such a cute couple and cute babies. We started to kiss and next thing you know his face was between my thighs. He kissed me as he entered me and we began to rock, steady! He proved himself to be an excellent lover and I wondered why I made him wait so long. As we lay next to each other breathing hard after a serious session of who can cum first, I put my arm across his chest. I could feel his heart beating hard against my arm. He lifted his shirt to reveal the biggest scar I had ever seen in my life right down the middle of his chest! "Oh my gosh Johnathan, what the hell happened to you?"

He explained how he had been shot 3 times and showed me all the entry wounds. The scar down the middle of his chest was from the surgery to retrieve one of the bullets. My heart went out to him, and I kissed the surgical scare from the bottom of his neck to just underneath his belly button. I knew that would be our first and last night together.

"I don't usually show my scar to anyone. Mostly I think because women would find it disgusting." I told him that I wasn't disgusted by his scar. But I knew I could never see him again. I put it on him one more time and then waited for him to fall asleep. When he started to snore, I got up and got dressed and let myself out to the bus stop.

I'm from Newark. I couldn't spend the night with a man somebody wanted dead! What if they came back to finish the job and I happened to be there? Somebody tried to kill this man and they almost did. That makes him a target and me a sitting duck. Regardless of how fine he was, that security guard needed one himself!

A city girl with a good story telling skill. Names of the innocent have been changed but the events are all true!

See all posts by Aiyda Blackshear →