by Heather Kinnane 12 months ago in fiction

Charlie hasn’t been laid in forever, so when a stranger to town needs a room for the night, she doesn’t mind offering her own. 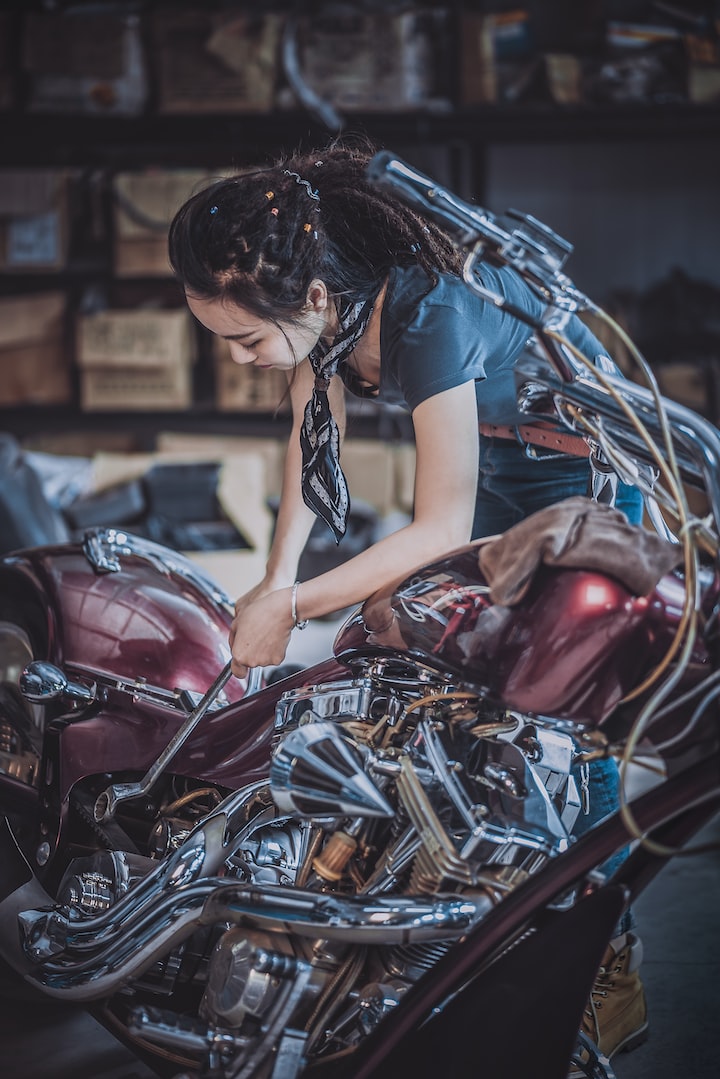 Photo by Jia Ye on Unsplash

Charlie grimaced as she fought with the bolt the starter motor. Who the hell had done this up? The damn thing was on so tight she wasn’t sure she’d get it off herself, and she hated having to ask for help. It would be easier if she could access it from above, but no, this particular bolt required her on her back beneath the car. She pushed against it with all her strength, only to have the spanner slip out of her hands and clatter to the floor.

She had to stretch to grab it, grumbling as she manoeuvred back into position.

“Someone there?” she called.

“Uh, yeah. Hi. Sorry, having some car trouble, wondered if you could help?”

“Isn’t everyone?” she muttered to herself. There were four cars in the garage today, and several more lined up outside. What was worse was two of the mechanics who worked for her had both come down with something, and the other had been called to a breakdown about 200 kilometres out of town, which meant she was stuck all on her own.

She pulled herself out from under her car, her shirt getting caught and pulling out of her jeans to ride up her stomach.

The man was young, his eyes wide when she emerged.

“Damn.” His gaze traveled her body.

“Never seen a chick working on a car before?”

She rolled her eyes. As if she hadn’t heard that one before. “Almost as hot as a man in the kitchen.” She shot back, as she strode out into the bright day. “So where’s your car?”

“Oh. About twenty k back that way.” He pointed out of town. “It just stopped. It’s only just had a service, too. I’ve got no idea what might be wrong with it.”

Charlie’s mouth dropped open. “You just walked twenty kilometres?” He was a bit sweaty, but he didn’t look like he’d just done a marathon hike.

He laughed again, rubbing the back of his head. “Only about five, I think. Got a lift with some young fellas for the last fifteen.”

“Right.” Charlie sighed, glancing at the clock on the wall. “To be honest I don’t think I’m going to be able to help you tonight. The tow truck is at least two and a half hours away in the other direction, and that’s if they don’t have any troubles hitching the other broken down car on the back. Might be best if you could find a place to stay and we’ll head out first thing in the morning.”

“Oh, okay.” He glanced up the street, then back at Charlie. “Don’t suppose you could recommend a place? I could buy you dinner. I’m Patrick by the way.”

Charlie met his gaze. He did have friendly eyes, and it had been a while since she’d been laid. It wasn’t exactly easy when you were related to pretty much everyone.

“Sure. It’s closing time anyway, let me lock up.” All the cars would just have to wait till morning.

They walked down the street to the pub, Charlie leading the way to her usual table in the back corner, away from prying eyes.

She ordered the beef and reef, a rump steak with prawns and scallops in a creamy sauce. It was her favourite, and after a hard days work she was starving.

Patrick’s eyes bugged out of his head when her meal arrived, though his roast of the day wasn’t small either, the pub prided itself on making sure no one left hungry.

They made small talk over dinner and drinks, beer for her, wine for him.

He definitely wasn’t a rural bloke, though she’d known that at first glance.

“Want to come back to my place. If you’re good, you can stay the night. Be cheaper than here, and you’ll need whatever money you can for the tow truck tomorrow. Trust me, that won’t be cheap.”

She didn’t wait until they were inside, pulling him in for a kiss on the doorstep as she opened the door, discarding clothes as they made their way up the hall.

In the bedroom she pulled a strip of condoms from her bedside drawer, dropping them on the bed before dropping to her knees to stroke his already hard cock.

“I’m happy to give one, as long as you return the favour.”

“It’s my favourite part of pleasing a woman.” He wiggled his eyebrows.

“Good.” She licked the tip of his cock, running her tongue down one side to the base, where she sucked on first first testicle and then the other.

“I like that.” He groaned, and she did it again, cupping his balls and rolling them between her fingers as she licked back up his cock and opened her mouth to take him whole.

“Damn.” He ran his fingers through her hair, just resting them there, not holding or forcing anything. She bobbed up and down, faster and faster, his gasps and moans sending a thrill through her body, and making her pussy wet.

She sat on the edge of the bed and he knelt between her legs, trailing kisses up the inside of her thigh. She spread her legs, the touch of his lips warm and soft, stirring the need in her groin. He was slow, deliberate, and she wasn’t used to it, his touch alone sending ripples of pleasure spreading through her body.

She was nearly climaxing when his tongue finally pressed against her clit, but his kisses moved to her abdomen, his fingers brushing through her pubic hair.

He grinned at her. “You said if I was good I could stay the night. Just trying to be good.”

She scowled. “You want to be a tease, you can try again in the morning. Right now I need a good fuck.”

“Well, then.” His mouth was back on her slit, his tongue hot and wet as he explored her folds, circling and sucking her clit, and delving deep inside her cunt.

“God. That’s it. Fuck.” She gasped as her back arched and an orgasm tore through her body, and she sat up, pulling him up the bed so he was next to her, then pushing him onto his back so she could climb on top.

His cock was a little droopy, but she sucked him again, pleased to see it didn’t take much to having him standing to attention. She tore a condom packet open, and held his gaze as she rolled it on. She straddled his hips, leaning over him as she ground against his cock, making it slick with her juices.

She tilted her hips to catch him, closing her eyes as she gave several short sharp thrusts to slide down over his length, and then she lay down on him, her breasts pressed against his chest.

“That feels so good.” She whispered the words, almost breathless, all her attention on the stretching between her legs.

She pressed her lips against his, seeking out his tongue and exploring his mouth as she rode him.

“God your dick feels nice,” she murmured into their kiss, giving several hard and fast thrusts. Patrick wrapped one arm around her shoulders, and the other around her waist, holding her close as his thrusts joined hers.

Soon they were both coming again, and Charlie sagged onto Patrick’s chest, her head resting just below his chin.

“Now that was good.”

She glanced up to see the smirk on his face.

“You can stay the night,” she said. “And any future nights you might be passing through.”

---Thank you for reading! If you enjoyed this story please click on the heart below, and if you really liked it, please consider leaving me a tip! Tips mean I can spend more time writing, and are greatly appreciated!