Where the Heart Is

by LUCINDA M GUNNIN 11 months ago in family
Report Story

Home is an Old Barn 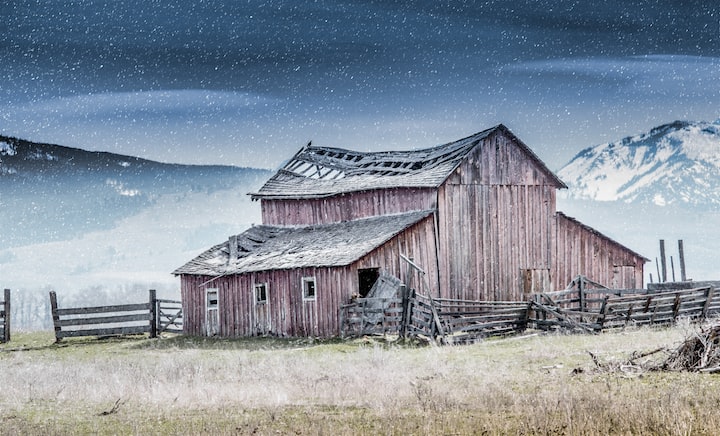 Photo by Dick Hoskins on Unsplash

Casey pushed her way through the corn, the broad leaves brushing her shoulders and mocking her as the tears streamed down her face. Five years of mediocre crops and the bank was about to take her farm.

This year, when the harvest wouldn’t be hers to keep, the stalks were heavy with cobs. Snorting at the unfairness of it all, Casey raised her face to the hot August sun as she stepped into the clearing next to the ancient barn.

“I’m sorry, Gramps. I tried,” she said, looking at the weathered wood and sagging hayloft that marked the spot where her great-grandparents had first started the farm.

More than a century of hot and humid southern Illinois summers had turned the wood gray and the numerous holes in the roof had let a colony of bats make their home inside the decaying old structure. Casey smiled when she saw it, despite everything, her memories flooding back to the summers as a child when she and her brothers had played hide and seek in barn much to her parents’ horror.

“You’re covered in bat shit again and that barn is not safe. You’ll get tetanus or worse playing in there.”

An old hay fork was rusted and barely visible from outside the barn, but Casey knew it was still sharp enough to gash your arm open. She had the scar to prove it.

In her mind’s eye, she could see her brother standing here, stiff and proud in his fatigues as he got ready to ship off to basic training just weeks after 9/11. It was her favorite, and last, memory him. He hadn’t returned from Baghdad.

“Maybe things would have been different if you’d been the one to take over the farm, Tommy,” she whispered to her memory. That had always been the plan, Tommy would take over the family farm and she’d run off to the city to become a famous artist.

But the dreams of gallery openings and champagne toasts had given way to back-breaking hours on the tractor when Tommy didn’t come home and her father, devasted by his only son’s death, drank himself to death a year later. Officially, the coroner ruled his death was a heart attack, a benefit of having generations of roots in one place. It meant her mother got enough life insurance to bury him and retire to a condo near Casey’s sister and her children.

And Casey got the farm.

For the first few years, her father’s old friends had offered advice and assistance with the place, muttering when they thought she couldn’t hear them that Casey needed to find herself a farmer husband who knew how to run the place. In her weaker moments, Casey agreed.

Between tariffs and bad seasons and the rising cost of labor, the last few years had just made it clear that the days of the family farm were ending. Casey tried raising organic vegetables, adding honey bees, and selling her artwork as supplements, but when she bought the seed last fall, she had known it would be the last time. There was no way she’d be making the mortgage payments to the bank this year.

Mr. Harlan at the local bank and trust tried to talk her out of ordering the seed.

“Take that money to get yourself a new start, Casey. Go live by your mama and your sister. Don’t make us take your land and leave you homeless.”

“He meant well, Gramps. I know you always hated bankers, but he tried to do right by me. I was just too stubborn, had to try as long as I could to keep one of us here,” Casey spoke aloud to the emptiness of the barn, expecting her only to answer to come from one of the cats or a confused bat.

“You got that from me,” a disembodied voice replied.

Casey jumped and screamed, the noise disturbing both the cats and the bats.

Certain the heat and the stress were taking their toll, she shook her head and reached for her water bottle. She’d rest for just a moment in the shade of the barn and then get back inside. Obviously, it was too hot to be out here if she was hearing commentary from her long-dead grandfather.

“Where else did you think I’d be, Case? Heaven for me was always this little piece of the world.”

Casey sobbed as a semi-transparent man in a wide-brimmed hat and overalls appeared next to the rickety ladder to the hayloft.

The old ghost smiled and offered her a hug.

“You were the best.”

Casey smiled and caught her breath. “What are you going to go when they turn this field into apartment buildings, Gramps?”

“Plant corn in their flower beds.”

Casey laughed out loud, knowing her mischievous grandfather would have done exactly that.

“Besides, they aren’t building apartments here just yet, Case. I’ve got at least one more generation of Morelands coming on this land before we lose it.”

“The bank is foreclosing next week unless I can come up with the payments today and there’s about $27 in my account.”

Casey shook her head, preparing to argue when her grandfather continued.

“You need to take this call, Case. It changes everything.”

He stopped speaking and the John Mellankamp farmer’s ballad she had adopted as a ring tone blasted through the barn.

Her sister didn’t even wait for her to say hello before she was shouting the news in Casey’s ear.

“Slow down, Kel. Which one? I mean, selling one painting of the farm will help, but it will only delay the inevitable…”

Casey held her breath and crossed her fingers.

“Kelly Moreland McDonald, start at the beginning and tell me what you sold and how.”

Kelly’s laughter rang out through the phone.

“I talked to a gallery owner I know and asked him if he would take a look at the paintings you sent me last winter, to see if maybe he could put up a few of them. I figured once the farm was gone, you’d get your chance to be an artist.”

“Kel, those were for us, for our memories.”

“You can paint more for us. He took one look at them and asked if he could display them all. And, there’s more. He has a friend who owns an ad agency in St. Louis. They want to know if you’d be interested in letting them use the old barn for some commercials they want to shoot. Matthew said they’d pay a lot to use it and since they want the cornfield in the background, they’d be careful about the crops.”

“You need to go shower, put on that pretty green dress you got for Christmas, and come meet Matthew. And put on some makeup. He’s hot…and he’s single.”

From across the barn, Casey saw her grandfather nodding. “Make sure you fix the hayloft before the boys are born. Can’t have them with scars that match yours,” he said, smiling, then faded from view.

“Just my artist’s imagination running wild in the barn.”

“For a minute, I thought I heard Gramps.”

Lucinda Gunnin is a commercial property manager and author in suburban Philadelphia. She is an avid gamer, sushi addict, and animal advocate. She writes about storage and moving, gaming, gluten-free eating and more. Twitter: @LucindaGunnin

More stories from LUCINDA M GUNNIN and writers in Fiction and other communities.