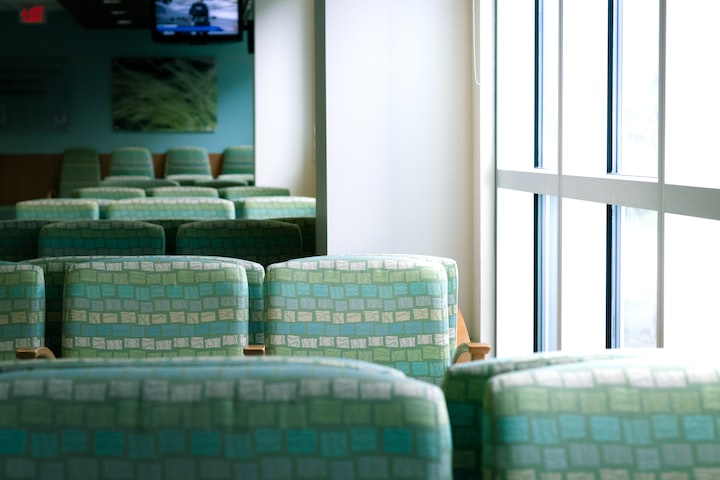 Sitting in yet another waiting room, I learn that Adam Sandler is the director and producer of The Price is Right.

Not that Adam Sandler, silly. Not the Big Daddy, ultra-rich but casually dressed Adam Sandler we all know and love.

No, this was simply another Adam Sandler. One who’s probably really good at his job and hates how his name alone will always place him as a runner-up. A less-than.

Now that I think about it, it’s a bit odd this man never changed his name just out of sheer convenience. I can already see the Starbucks baristas rolling their eyes. Though, he may just have a handful of favorite aliases, providing a different name to each fast-food worker: Bill, Steve, Greg, Rod. Maybe he’s just the jokester type. The kind of man who says things like “working hard or hardly working?” to retail workers on the verge of shooting themselves.

But wait, what if he gets pulled over? “Adam Sandler” belongs on a hall of fame of worst (but amusing) fake IDs - right next to Fogell’s “McLovin.”

Screw it, I’m reading too much into this. I’m the connoisseur of overplanning, of expecting the worst.

Anyways, there went the credits. The show ended with a lucky guess, a big prize winner. The waiting room is still nearly vacant and the TV is set to such a low volume, it might as well have been muted.

It’s eerily still except for The Price Is Right on the little mounted television. A show, which, when played interminably could turn into my own personal hell. The kitschy set, those yellow price-tags bearing everyone’s name, the models. It’s almost as bad as spending hours of your life sitting in waiting rooms.

You may be wondering what kind of waiting room I’m even in. Am I waiting to get my teeth cleaned or am I in a hospital awaiting news about a relative splayed out on an operating table? The answer is neither. I’m in a waiting room wondering why the hell I’m here at all - what I’m actually waiting for. Chronic illness will do that to you. Doctor’s appointments aren’t as black and white anymore. I’m not a little kid in animal-themed pediatricians' offices for an annual checkup - getting poked, prodded, vaccinated, and handed a lollipop for my compliance all in fifteen minutes time. No. Doctors’ offices are much more of a devastating arena when you’re desperately waiting for an answer that you simultaneously dread. A diagnosis that isn’t inherently fixable…

Coping is a vicious word. I’ve inherited it from white coats.

Inconspicuously, my whole life changed during this mindless hopping between waiting rooms. All of a sudden, I could no longer distinguish sickness from health. There was just pain and respite on a constant loop. I’ve tried to desensitize myself to it. That’s what I’m doing right now. I listen obsessively for the sound of footsteps approaching the door, but all I hear is the receptionist’s whispery chatter. Sometimes the phone rings and it startles me. I realize that I’m shaking. There’s a timeless, untethered quality to this place, borderline unreal.

The Price is Right switches to daytime soap operas. I can’t tell yet if this is worse. At least it signifies that time is indeed passing by. I would estimate I’ve now been sitting here for about fifteen minutes. Only one other patient has been taken back since I arrived.

Like most waiting rooms I’ve been in, I find that there is this subtly amusing challenge in the air.

I scan the room to view my remaining, sparsely scattered sick compatriots, and I feel the need to prove my affliction. Like I need to jump up and yell, “I swear I’m sicker than you!” Like I should be wearing a lanyard around my neck with a card listing each and every symptom. Invisible illness will do that to you. If your diagnosis isn’t outwardly visible and you happen to be quite young, you find that everyone is quietly questioning the reality of your illness. You begin to feel like a fraud no matter how sick you feel.

At long last, the door swings open, and a woman in dark blue scrubs calls my name right as I’m sizing up my competition.

The room smells of antiseptic, underscored by a sweetness that clings to me. I had lathered my arms with floral lotion at home. Some Bath & Body Works concoction that’s been sitting on my shelf since before I got my first period. I have an affinity to hold onto things that remind me of my unremarkable youth.

This room is just another manifestation of the waiting room. It’s an upgrade in terms of sterility, and it’s more doctored (pun intended) to appear as some haven of knowledge. There are always large-framed posters and diagrams in places like this. I’ve come to learn that they’re not entirely for show. I’ve had doctors whip out diagrams or try and sketch illustrations sedately like some sort of cartoon diversion. I’m the dimwitted guard being distracted so the protagonists can make their narrow, comedic escape.

Luckily, this room doesn’t feel cramped, like many doctor's offices I've frequented. The outer wall has one massive window looking out over the urban skyline. It reminds me of how high up I really am. I had to brave ever-winding parking garages and elevator rides to get here. Might as well settle in. Google this other Adam Sandler. Get a visual of him.

The doctor knocks on the door right as I locate a picture. He’s on the far left of a group photo. He’s bald. His face is indistinguishable. It blends in. I’m annoyed at how ordinary he is. His name should correspond to it. He should change his name to something more befitting, like Adam...Smith. I always forget if that’s the famous economist or the white dude from Pocahontas. I tend to mix them up.

“How are we?” The doctor requires my attention. I look away from Adam Sandler 2.0 and supply his ears with my prepared script. I’ve developed a knack for listing off my symptoms as one would read a family’s scribbled grocery list.

As I talk, he takes notes with a stylus. The letters look loose and free, unintelligible from my angle. I stare at his thinning hair.

When he finally focuses his attention wholly on me, I wonder what he sees. It hurts me even to consider. I can feel my skin thinly scraping across my sternum when I try to sit up straight. My veins bulge out of my pale arms. I’m lightheaded - the warm, artificial air is making it worse.

I wonder if a whiff of pity unfolds before him - if his notes reflect how I grieve over this body still breathing. If he does, he doesn’t seem to let on. Instead, he talks about layers, about approaches and confidence, about taking my time. I’ve heard this spiel before. These things take time. It’s not a race to the finish line. We have to take things layer by layer to try and build you back up. Are you still going to acupuncture? This process is about managing and controlling what we can. How about mental health support?

Nothing the man with the thinning hair says grips me to reality. For once, I’m not thinking about my body in perpetual chaos. I’m still thinking about the other Adam Sandler.

I don’t realize it at first, but he begins to pick up on how I’m just letting him rattle on - that I will not or rather cannot grab onto anything anymore. You’re running on empty.

The man, now more aware of me than I am myself, changes gears before his parting instructions. For the first time, I am able to listen to the human, not the doctor before me. It stops me in my tracks.

“I’m proud of you for not giving up on your body,” he says.

I can’t recall what I replied to that... if I replied at all. That was the kind of remark that I’d absorb in a sigh and sit with for years.

He finally leaves, and I feel like crying. But no, that’s what dim parking garages are for. I just have to make my descent.

Back in my car, I sit idle for far too long. A downpour came on, and the parking garage had taken on a muggy and damp but safe feeling.

There’s a Selena Gomez song playing on the radio. I turn up the volume a smidge. I favor Selena Gomez over other pop stars with a Disney Channel history because she, too, has lupus. When I was seven, I had a poster of her hanging in my room that I’d ripped out of a Tiger Beat magazine. Who knew we’d both grow up to lose our grip strength?

I've already forgotten about the other Adam Sandler. Now I'm thinking about my different childhood bedrooms. My borderline-forgotten youth, my fervid adolescence, my plummet into young-adulthood.

I have this habit of fractioning off my memories into categories. Said categories used to be before and after I lost my virginity or before and after I got my driver’s license. Now, it’s just before and after I got sick. So when the doctor talks about peeling back these metaphorical layers, my mind reverts back to past selves - half-forgotten bliss and youthful ignorance. A part of me doesn’t want it back at all. I laugh at that, my voice briefly harmonizing with the hum of my car engine. My old therapist would’ve milked that out of me if I hadn’t discontinued our sessions. She preached a lot about throwing off the past and moving forward, shedding our fears and worries.

That said, if the layers do peel back, I hope there will be someone left. I hope some core part of me has gone untouched, trapped for years. Someone still holding twinges of childhood security… someone not waiting for the end.

More stories from Erin Shea and writers in Fiction and other communities.