by Matthew Daniels 6 months ago in Adventure 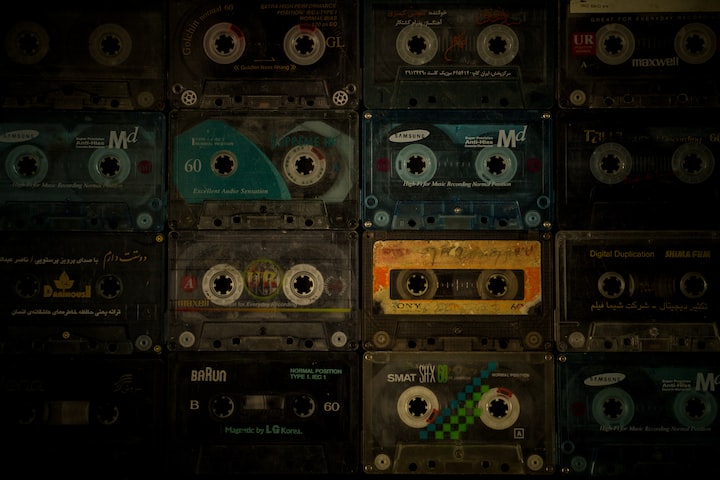 Photo by hosein zanbori on Unsplash

“Good afternoon, everyone, and welcome to this week’s broadcast of Keeping the Peas. I’m Paul and this is Phyllis.”

“Thanks, Paul,” Phyliss said. They occupied one of the radio studios of CHMR at Memorial University of Newfoundland. “You know, I’m proud of Keeping the Peas. We’re all about voices, both worldwide and right here in Newfoundland and Labrador."

“We’re voices right now, so I guess we’re done here. Thanks for listening in, folks!”

“Oh, give up, you,” Phyliss said with a giggle.

“So what do we have today?” Paul asked.

“Since this show is all about voices,” Phyliss replied, twirling a pencil in one hand and resting the other on the arm of her chair, “Today’s broadcast is going to look at the voice itself. We’ve got a Masters student from the Department of Linguistics coming to join us shortly. In the meantime, let’s chat about chatting.”

“We’ve only been doing this show for three weeks now,” Paul started, “but it’s really taken off. We’ve been getting a lot of people asking, ‘Why voices?’”

Phyliss set down her pencil. “Yes! Many think there isn’t that much to talk about. But we were looking at a study just the other day. Yale, wasn’t it?”

“That’s the one,” Paul replied. He was acutely aware that he was speaking Radio Voice, which everyone told him was different from Paul Voice. “They did a bunch of research about listening skills and understanding the emotions of others.”

“Voices, it turns out, are better than facial expressions or body language.” Phyliss said.

Even after the linguistics student joined in, Paul and Phyliss continued to banter about and discuss that study. Even after Paul left campus, heading home with heart held high, it bounced about in his thoughts. Even after a week had passed, he found himself watching his voice. Not merely his words, but their pregnancy in his throat. Were they thin? Heavy? Warm or cool? Hot or cold?

During the week, he thought back to La Manche, which was a nature destination a short drive out of town. It had a bridge and signs, so it was not wilderness. Despite footprints and wrappers, it was not populated. Tucked away behind the curves of the landscape, it had a small waterfall. Paul, Nissa, and their parents used to travel there every month of the summer. Once or twice they came by in the winter. It was as beautiful and hard to reach as a conversation that takes away the awareness of time.

Then Nissa was six.

Their father, a talented steelworker, often branched off into carpentry and other trades. Which meant that he had hands covered in dirt and tables covered in tools. Most of those were in the shed, the basement, or his truck. They were never left out.

He’d traded punch clocks for contracts. He and his wife taught the children when they could: Here’s what life brought you today. Here’s how to deal with it.

Their mother worked at a call centre and volunteered with sign language groups and the hearing-impaired. Before the bills pulled her out of the sky, she’d flown her dreams to far away lands and talked about languages, huge advocacy plans, and prestigious organizations.

Nissa took more interest in what kinds of personalities the tools could have if they were people. She wouldn’t wear jewelry unless it had a story. She liked movies and kept stealing Paul’s clothes – even though they were much too big – because pockets were important.

When Nissa was six, she stormed into the backyard, dancing her theatrical stories. The tools understood her, and didn’t need to be told. The lawnmower was sensitive, good at listening, but excitable. The toaster knew how to cheer her up. All the little ones in the toolbox were background vocals for the Disney songs she never sang. Dance was good and song was good, but Nissa was an actress.

Dad was joking with Mom when he looked up, out the window, and saw the silence in the yard. The door to the shed was ajar, without violence or light. Even with the doors and windows closed, Dad could see the silence.

After the accident, Nissa always wore a scarf. But not like the people with Paul now; another episode of Keeping the Peas. Beside him, Phyliss. Before him were the day’s guests. A writer from Memorial’s student paper, the Muse, sat on the left. The writer was wearing a black, grey, and purple scarf. Then there was Stephanie, acting as interpreter.

Once a song ended, Phyliss said: “For those of you just tuning in, we have Dr. Noreen Parsons with us today. She’s a professor at MUN’s Department of Gender Studies. We’re going to be talking about the hashtag, Me too. Paul, do you wanna repeat some of the stuff you were saying when the story hit the news?”

Paul let out a slow sigh. “I…I’ve been blown away. I don’t even know if I can really say anything. I mean, all my Internet everywhere is filled with women telling their stories. And they’re probably not the only ones.”

“Yeah, many are still choosing not to share their stories. It’s a personal choice, and not an easy one.” Noreen was signing. “Though there are men saying, ‘How can I help?’ I see Paul is nodding confirmation.”

Paul said, “Yes, and I won’t be saying much else. Let’s focus on the voices of women. But I do have to ask: Dr. Parsons is using Sign Language I don’t understand.”

“That’s because it’s French Sign Language,” Stephanie responded. She was with MUNSU, the Students’ Union. “Dr. Parsons is from Blanc Sablon. And she says this conversation is long overdue.”

As Keeping the Peas continued covering the issue, Paul checked that the speech-to-text on Noreen’s laptop was still working. She was reading in English the words she could not hear and signing her own in French. This was the kind of stuff he and Phyliss had been thinking about when they put the show together.

The discussion shifted back to online media and Professor Parsons remarked: “It’s about more than a change in rhetoric. It’s not just pronouns and repetition.” The writer sat with a voice recorder in his lap. Phyliss and Paul were rapt. “It’s about attitude, belief, and in-your-face reality. The numbers are scary, but it’s the stories. It’s the stories.”

With the repetition and weighty discussion, Paul pictured the sign he knew for “again.” What he knew was American Sign Language, and the gesture curved one hand down to one flat, palm-up hand. It looked like a waterfall. Phyliss, meanwhile, was thinking that communication was only as strong as its silences.

Early in their knowledge of ASL, they’d been hiking on the East Coast Trail. At first, Nissa had rejected the loss of her voice. They told her to read lips and her response was not appropriate for a radio show. The rest of the family was learning to sign.

And she was not.

She’d been the last to learn it. When they passed the Spout – a rocky spot on the East Coast Trail that sometimes blasted water into the sky – Nissa fell behind. No one noticed until they’d all reached the edge of the next stretch of trees. They all turned to see her screaming into the crevice of the Spout. Naturally, she wasn’t making a sound.

But that wasn’t the point.

That day she had a mouth of water and stone. Paul signed to Phyliss, her first boyfriend, and Nissa’s friend. “Remember the family trip last year?” He hoped he’d signed.

Mockery bounced about like a volleyball because that was not in fact what he’d signed. None of them could speak, though; that was the point. They were trying to get Nissa to learn.

Phyliss’ boyfriend struggled not to laugh. Bad Bob wasn’t all that bad a guy, and his name wasn’t Robert. He started throwing rocks out over the edge of the cliff, into the ocean. Maybe he aimed in the direction of the ship of tourists on the horizon. Sometimes tourists liked to go out looking for icebergs or whales. This wasn’t the best area for that. Perhaps they had a bad guide.

Years later, sitting with Phyliss at his side and a suspended microphone just over his face, Paul watched Nissa’s hands. They were fiddling with her scarf. Black and green with a silver serpent. He could just see the crumpled “S-L-Y” of Slytherin.

“Good afternoon, everyone, and welcome to Keeping the Peas. I’m Phyliss.”

Phyliss continued. “Today we’re going to be talking about sign language. Not just ASL – American Sign Language – but all kinds of ways of signing. We have with us a young woman named Nissa who lost her voice to a throat injury when she was a child.”

“Thanks for joining us today, Nissa,” Paul started.

“Hello to everyone who’s listening,” Phyliss translated Nissa’s hands, “and thanks for having me on Keeping the Peas.” Nissa signed it as a plural of the letter “P,” and Paul stuck his tongue out at her. Phyliss jabbed a finger at each of them as if to say, Be good!

“It’s our pleasure,” Paul said. It was surreal; this interview was happening on more than one level. “So: tell us about your experiences with people who don’t sign.”

Nissa signed, “One weird thing is the fumbling about whether to show me their phone or just send the message to me. People, I think, need to emphasize the fact that someone else is different because they’re trying to remind themselves to be sensitive.”

“Can that be alienating?” Paul asked.

Phyliss did not translate Nissa’s shrug, but passed along her words: “It used to be. I didn’t understand why they did it at first. Even without actual sign language, you can still get by with gestures and movements. You can play charades with me.”

Both siblings navigated the conversation around the sign for “again,” as it referenced waterfalls to them. They shared some connection about that which few others understood.

Eventually, they talked theatre. “My ambition is to be an actress,” Nissa said. “Yes, activism is important: signing, the hard of hearing, and people like me who are mute but not deaf. I’m more than a member of a group, though. I’m also myself. Theatre is a community art and also something personal. Acting isn’t just about being someone you’re not, it’s about showing other people who they really are. That’s hard to watch.”

“What do you mean?” Paul asked.

“Look at how they hope for oil prices. Look at the tourism industry, and how we try to package ourselves as the struggling fishers. Have you heard about the Sprung Greenhouse?” Nissa asked.

Paul had never heard her talk like this before. “No,” he lied to prompt her.

“Back in the eighties, the N-L government pumped millions into a spiffy greenhouse that was supposed to make the province a bunch of money.” Nissa had blinked at Phyliss using ‘spiffy’ as the translation, but carried on: “One of those fix-everything ideas. It failed miserably. Reminds me of waterfalls.”

Paul was taken aback. “How so?”

“Struggles don’t just stop. A waterfall that stops is a dry riverbed, not itself anymore. That’s why I don’t expect theatre to do everything for me, as much as I love it.”

“They’re all about the speaking parts,” Nissa signed.

I'm the author of Diary of Knives, a novel in the universe of Engen Books. I'm here to experiment with my writing, and I look forward to exploring your work!