The Bees and the Pear Trees

When a spate of unexplained deaths rack a sleepy town, the house with the bees and the pear trees holds the key to unlocking the mystery. [Short Story by: J.L.Nicholls]. 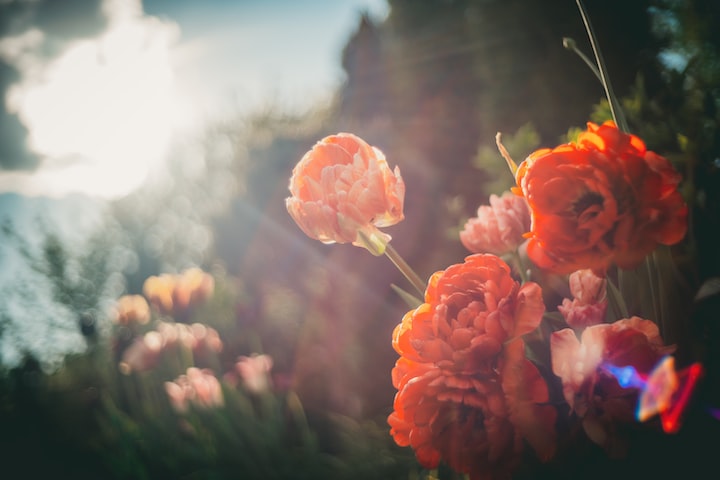 The Bees and the Pear Trees

I woke to the sound of screaming.

As I transitioned from sleep to wakefulness, the fog of my dreams lingered for a second, then vanished with the pierce of another wail.

Slowly, I peeled the sheet from my body – the heat cloying and disorientating. Dust and sweat suffocated my skin, the summer offering no relief as it beat down on our small, crooked house.

My mother’s shriek travelled from her bedroom, echoing up the wooden stairs until it reached me and my trembling body – cold despite the heat.

“Sophia!” she shrieked again – more desperate this time; more of a plea.

Plucking up the courage, I stood to my feet and began the descent from the attic to my mother’s cramped bedroom a floor below.

I knew what awaited me. Even so, seeing her in nothing but a strap top and pair of too-small-knickers, her hair plastered to her head as she rocked back and forth beside the man I called my father, I felt a pang of remorse.

“Sophia,” she sobbed without looking at me. “What have you done?”

“Nothing, Mama,” I said, twisting my hands in front of me.

Every instinct I possessed told me to run. However, I’d long learned to bury my flight or fight response. Freezing seemed easier: less exhausting. And so, I stood there, knowing if my mother looked at me now, she would see the truth.

“Just go,” she wept, her sobs silent and juddering.

Her permission unlocked my limbs, my body suddenly mine: autonomous in a way I’d never felt before. Not in this house. Not with him.

“I’m sorry,” I whispered, my back turned and feet already descending the stairs.

I passed through the kitchen, the morsels of our stew supper cooling on the stove, the crumbs of our crackers littering the table, and the ribbon-tied honey from the kindly Ms Tilbury still open. An accompanying note read, ‘The bees send their love,’ and I warmed at the words before replacing the lid and throwing the whole jar in the bin.

The shackles of my front door came away easily. Of course they did. I was an elephant tied to a blade of grass. And now I was free.

I ran down my pot-holed street, the moonlight lost to the narrow roads with buildings too close together and windows too grimy to see in or out of.

No one came to my mother’s aid, despite hearing her screams in the same way we could hear the conversations about her through our paper-thin walls. I almost turned back, ready to throw my arms around her and beg for forgiveness.

I kept walking, realising I didn’t know where to go, yet wanting to be as far away from my mother and what she represented as possible.

Soon, I found myself walking up the cobbled hill towards the affluent part of town. Here, they had flower shows and garden parties. My mother and I used to get invited, back when I couldn’t read and my father didn’t drink so much. But not now. Now I only visited to do odd jobs for the villagers who could afford to pay for my services.

I stopped to catch my breath, the house that hummed with the buzz of bees looming in front.

It was too late to knock on her door, but there was nowhere else I felt safe enough to sleep. So, opening the twisted metal gate and passing over the threshold, I winced as it creaked and closed back on itself.

The garden was filled with plants from all over the world. Bushes, flowers, hanging baskets and trellises with creepers all teemed with life. I was in the presence of history, of culture, of a thousand curative potentials crammed into one space. There was nowhere like it in the village.

The bees obviously thought so, too, as they never strayed far. When they weren’t busy pollinating Ms Tilbury’s prized perennials, they were gorging on the fruit of her two pear trees.

I looked at them now, their branches entwined as they stood guard to the left of the garden. Curling up beneath the largest of the two, I wrapped my arms across my chest and gave a silent thank you to the summer heatwave. And although my eyes fought sleep, it soon chased me into oblivion.

I don’t know if the bees or the birds woke me first. However, when I opened my eyes and saw dawn breaking, I forgot where I was for a moment.

As the humming grew louder, I looked around and noticed the pillow under my head and the blanket draped over my body, which were obviously placed there at some point during the night. Furthermore, I realised the humming was coming from Ms Tilbury, not the bees – her tone flat as she dug the earth and pulled out weeds and dead leaves.

I sat up and cleared my throat, but Ms Tilbury carried on preening. “These Rhododendron bushes need burning,” she muttered.

I didn’t respond, deciding to wait until she acknowledged me.

Her weathered face was hidden beneath a straw hat, her hands arthritic yet strong, and watching her work the land was like watching someone who knew its secrets with a promise to never tell them.

“Are you hungry?” she asked eventually.

I nodded eagerly, and Ms Tilbury finally turned to acknowledge me. Despite the shade of her hat, her grey-blue eyes pierced the space between us, and I knew she understood why I was there.

“How long did it take?” she asked, slowly getting to her feet.

I wanted to help her up, but I knew she’d shoo me away. And when she was finally upright, she gestured for me to follow her through the side gate leading into her back garden.

Once there, we stopped a little way from the half a dozen beehives, which sounded dissonant somehow – offkey. Even from where I stood, I could see they were acting strangely, as if drunk on fermented pears.

“What about the oleander?” I asked.

I followed her into the back of the house. There was a single pot of honey on her pantry table, ribbon-tied like the others with a note attached – the same one my father received. Next to it were wooden honey dippers soaking in a pumice of oleander leaves, oil, and water.

“Same as the jessamine,” she replied. “The bees have caught onto the deceit.”

She passed me a pear from her ornate fruit bowl and then set about finishing her gift basket. “Let’s hope this does the trick.” She added a few honey sticks and removed a wooden spoon from the pumice. Wiping it clean, she tied it onto the pot. “One more to go,” she murmured.

She passed me the basket.

“Won’t they think it’s odd,” I asked, “me turning up after my father—”

“I doubt they’ll even blink,” she interrupted, her tone laced with venom. “You’re nothing but a prime piece of steak to these vultures.”

I set my jaw, knowing it was true.

“When you come back, we’ll celebrate your birthday,” she promised, her tone softened. “After all, you’re a teenager now.”

“Really?” I gasped, my heart quickening.

“Don’t get sentimental,” she scolded, although I could see she was fighting a smile. “I can’t very well see you on the streets, can I? Not after all you’ve done for me and this village.”

My chest felt ready to burst. I’d have a home. A real one.

As I followed Ms Tilbury through the pantry and into the sitting room, she stopped to check a book titled, ‘Wicked Weeds and Misdeeds’ on her writing desk.

Running her finger down a page, she tapped it twice when she found what she was looking for. “If this doesn’t work, I have a tea infusion that might.”

She snapped her gaze to me. “We can’t be too careful, Evelyn.”

My heart skipped a beat.

“It’s okay,” I said, flicking my gaze to the photo above the fireplace.

A family portrait rest above the mantel. It depicted Ms Tilbury, her daughter, Evelyn, and her husband, Mr Tilbury – the first to fall victim to a spate of unexplained deaths cursing the village: one that included symptoms such as nausea, vomiting, paralysis, and heart attacks.

It all started with Evelyn, apparently. Ms Tilbury found her beside a bowl of half-eaten oleander leaves with a note one day. It’s what gave her the idea, she'd said.

Ms Tilbury shuffled towards me and cupped my chin. “For both of you,” she said. “You’ll do this for both of you.”

My eyes stung with unshed tears.

“Now, run along,” she urged. “And don’t touch your mouth until you get back here.”

I nodded. I knew the rules.

Grim determination forced me to leave the house with the bees and the pear trees. The honey pot under my arm was a loaded gun, infused with the nectar of the poisoned garden with the poisoned history, made by the poisoned souls left to tend to it.

More stories from Jodi Nicholls and writers in Fiction and other communities.