A short story for the Vocal+ Old Barn challenge. 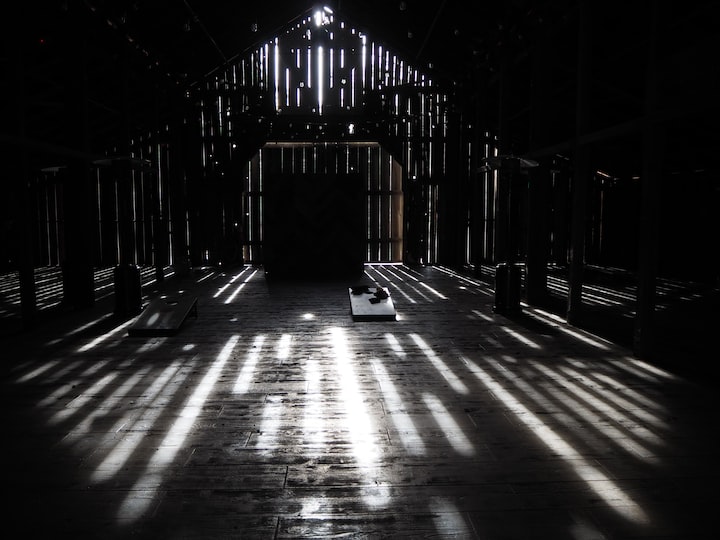 That’s what they’d told me.

The stories hadn’t been enough. Despite the warnings, I’d grown obsessed – devoured every intelligence written about them until there was nothing left to learn. There was nowhere like it in the world, nor was there anything like them in the known universe.

And so, while my family rest – the sound of their recouping humming through the barracks – I’d gone out on my own.

I wish I hadn’t. I wish I’d listened. I knew everything there was to know about them and I still wasn’t prepared for what I saw.

The blood that stained my hands was already drying. The oxygen probably helped with that, and idly rubbing the plasma with my fingers, I tried to think of a plan.

The waypoint was on the other side of the lignin field. I’d taken shelter in a dilapidated structure of some sort, made from the same substance their oxygen came from. Except, they’d moulded it into a rectangle shape with a tall, triangular roof. A network of various stems and tubes weaved along the top to keep it upright, but the weather beating against the frame meant their efforts proved futile.

Through each broken slat, moonlight shone a glimmer of silver onto the ground below. The earth I sat upon was covered with a dried version of the lignin field. Mounds of it were gathered and shaped like cuboids, and it was behind one of these formations I hid, listening as the slide of metal forced me to press myself further into the edifice. Wiry strands scratched the exposed tissue on my cheeks and hands, but it was better than being discovered by the creature hunting me.

“Hello?” it called into the structure.

I closed my eyes and reached for my inhaler. One shot would reset my vitals and allow me to escape, but I didn’t know where I was going. I was faster than them, but they didn’t need to outrun me when they could outlast me.

“It’s okay,” the creature bellowed, the power of its vocal cords sending shockwaves through the ruin. “I won’t hurt you.”

That’s what they all said, right before they killed you. I knew not to listen.

It was supposed to assure me. But whatever a farm was, I knew it wasn’t friendly. I’d seen as much already, the fate of the flat-nostrilled specimen I'd tried to help a stark reminder.

My hands started to itch. I needed to get to the waypoint. While the inky night remained above me, so would my way back to my family. If the sky cracked with the blinding light of their sun, all would be lost. I wasn’t like the occupants here. My skin couldn’t handle the force of a burning star.

“Okay,” the creature said with a sigh. “I’ll leave you alone.”

Relief flooded through me as I listened to the sound of disappearing footsteps, shortly followed by the screech of metal upon metal. Replacing my inhaler, I moved away from the prickly cuboid and stepped out of its shadow.

The creature was still there.

I cursed myself a second time.

I wanted to run but I could barely force myself to breathe. All I could think to do was placate the creature with its own language, which I’d studied and mastered in honour of my obsession.

It tilted its armoured brain, waiting, and I realised it hadn’t heard me.

Remembering to turn on my decibel enhancer, I tried again.

The creature showed its mandible weapons for a second time. “You know our language?”

“Human creatures?” I offered instead.

I nearly answered, the secrets of my race poised on the edge of my tongue, but managed to catch myself and say, “Not… human.”

“Hmm,” was all the creature replied.

Trying to retain the fluids in my biochemistry, I searched for an escape.

“You look similar to us,” it said.

Should I tell the truth? Would it help? I didn’t know the answer… So, I merely stared at the creature staring back at me, its predatory eyes so much smaller and closer together than my larger optics. They could see in the dark, sense vibrations, and cast light in the shadows just like us, but they couldn’t see heat without special equipment. That was our advantage.

If only I could get outside…

“I’m sorry again for what you saw.”

My hands throbbed in response. I'd tried to help the specimen – to stem the liquid. But the creature caught me disturbing its meal and chased me into this structure.

Examining my fingers, panic rose in my chest. The rash spreading over my extremities had doubled them in size.

“You have fewer fingers than us.”

The creature held up their hands to show me their extra extremities, the protein spikes on each tip mocking me. One slice of their talons and I’d be dead in two of their heartbeats.

It was a bluff, of course. Humans ingested capsicum and contaminated their bodies for fun. Eating me would hardly register in their gastrointestinal tracts.

Even so, the lie was worth a shot.

The creature merely threw its head back and cackled at the moon. And when it returned its gaze to my face, it showed its mouth bones and protein spikes once more. “I’m not going to eat you.” It wiped a talon beneath its leaking orbital. “We don’t eat humanoids.”

The creature waved a hand. “That’s different. They're food. Our bodies aren’t the same as theirs.”

I wasn’t buying it. All the creatures of earth were made of meat. However, I wasn’t about to challenge the delusional predator blocking my path.

“If you’re not going to eat me, will you allow me to return home?”

The creature opened its mouth to reply when a sharp peal echoed across the lignin field. I immediately backed away and searched for an escape.

Whatever a Souki was, it sounded dangerous.

“I’m infected,” I reiterated, my vocals waning with the effort. “I need to return home to recoup.”

“Okay,” said the creature, nodding its head. “We’ll get you home.”

A scratch at the metal made the creature turn around, and for the first time, its back was turned. As it shuffled towards the Souki, I reached for my inhaler and plunged it into my neck receptacle.

My vitals responded instantly, the surge of vitality allowing me to move my legs at a quicker speed. Making a dash for the exit the creature revealed, I swept past its towering form – at least two feet taller than me – and its minion waiting just outside.

The lignin field was wet, the water that fell from the smoke clumps making the ground harder to traverse. I hoped I ran in the right direction, my instincts telling me the waypoint wasn’t far.

It wasn’t long until I realised I wasn’t alone – that something was running alongside me. And daring to turn my head, I saw the creature’s companion keeping pace.

White fur bristled over its long, lithe body, and it ran on four powerful legs, not two, which explained why it was able to maintain its speed. Its mandibles were longer too, with protruding bones sawn into sharp spikes instead of the crushing flattops the human creature sported.

With terror pounding in my chest, I didn’t see the dip before me, the waypoint having gouged a hole in the earth when it first delivered me here.

I tumbled head over heels into the ditch, the lignin and smoke vapour further contaminating my bodysuit and epidermis. If I made it home now, I’d be quarantined for the rest of my cycles.

However, there was no time to consider the consequences of my choices. The Souki soon discovered me lying on my back and wasted no time coating me in its bioweapon.

Despite the doom it foretold, the prehensile muscle it used to douse me with infectious material soothed the rashes across my tarnished tissues.

I heard the human creature before I saw it. As it joined the Souki and me in the ditch, it quickly brought its deadly companion under control, allowing me to sit up and compose myself.

“The Souki attacked and certified my demise,” I said, touching the moisture dripping off my face.

Unable to help the smile crossing my face, I shook my head in disbelief. “We were told to find them if we ever crash-landed here,” I said. “They’re one of the only non-hostile creatures known to populate this planet. It was said they’d protect us.”

The creature made a guttural sound, which I realised suggested amusement, not homicidal intent. “Mostly. You’re lucky Souki’s friendly.”

As the sticky substance slid off my chin, I wondered if the creature understood that murder was not an act of kinship.

Before I could ask, the atmosphere thickened and the vapour in the air fell at a heavier velocity. The resulting droplets felt like bullets, forcing me to cover my face as the planet unleashed one of its only forms of self-defence.

Peering through a gap in my fingers, I saw the creatures watching me, seemingly unaffected as the water washed their fur and flesh. It was only when a flash illuminated the sky they moved towards me.

“How do we get you home?” asked the human creature.

I looked at my hands, ready to face my fate, and almost choked back a sob.

The wet substance was… healing me…

Getting to my feet, I backed towards the waypoint glowing behind me. It cast a fractured sphere of light that would transport me home, and all I needed to do was touch it. The creatures couldn’t see it. Their eyes didn’t operate on the same spectrum ours did.

As it came within reach, I showed them my four mouth stones. “Thank you for not eating me,” I said.

“We were never going—”

My hand touched the sphere.

Author note: This short story was inspired by the brilliant Terry Bisson, who wrote a famous Sci-Fi short titled, 'They're Made Out of Meat,' and an old Reddit thread a friend sent me years ago about how terrifying humans really are.

More stories from Jodi Nicholls and writers in Fiction and other communities.