by PK Brannon 3 months ago in Short Story 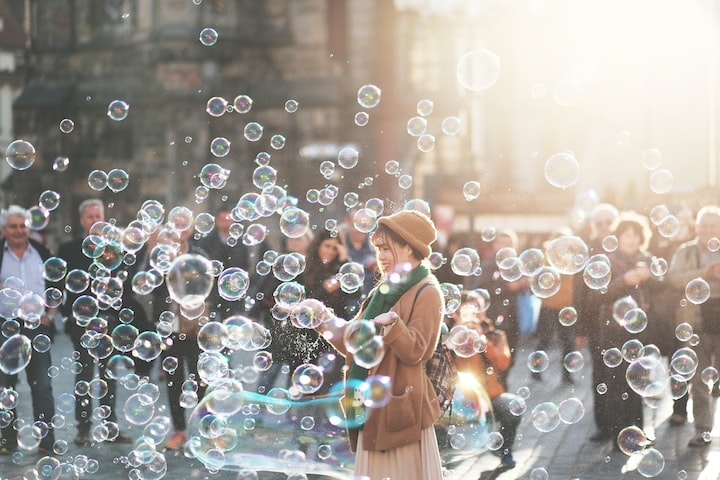 Photo by Alex Alvarez on Unsplash

The screeching tea kettle punctuated the morning sounds of dogs barking, phones ringing, bathroom battles, and toddler tears. Jenna mom-handled it by simultaneously catching falling cereal bowls, routing her cell phone talking husband to the den, and shouting orders to takes turns in the bathroom. In minutes they would all be gone for the day and she would get ready for work quickly with lipstick, dry shampoo, and deodorant- promising herself she would shower tomorrow for sure.

As Jenna arrived at today's coffee spot she smiled broadly. Thirty whole minutes to herself! She sacrificed her shower for this little piece of time that was all hers but it wasn't about the coffee, it was about watching people. Leftover from a college theatre game, the idea was to simply observe people. Then imagine their lives by creating their stories. Who knows why this was entertaining oh-so-many years later, but it felt like therapy to Jenna. Getting to momentarily escape herself, and live vicariously through the imagined perspective of another. Each place- whether a McDonalds, Starbucks or today's Sunrise Diner- attracted a very different clientele, and offered very different lives to peruse.

The sunburst shaped sign above the doorframe illuminated in an ombre effect ranging from the bottom green light up to yellow as the door opened. A man in a business suit walked briskly in, taking a quick look around while texting. Hmm...Wall Street type, first time here, running late for a meeting. Well, that was too easy , Jenna thought, shaking her head and letting out an audible 'psshh' as he passed. Next? Still 25 minutes left.

Just coffee, emails and back on the road. Alex had 40 minutes until the interview- and it was just 10 minutes away. Grabbing a booth, he began to click away on his phone. The waitress came by with coffee and a tired smile. " Hey- I'm Rose, your server. Can I get you anything? " she asked. He answered just the coffee, handed her $5 and said keep the change. She explained if he changed his mind to just let the busboy know as it was the end of her shift. Alex rudely rushed her off, trying to stay focused. He thought he heard her mutter a response as she walked away, and he didn't blame her. He wasn't like that normally. It always bothered him when things happened he couldn't correct or explain. Like why was that woman shaking her head at him when he walked in? Like-judging him. Hey lady, glass houses- people who have static cling socks on their sleeves shouldn't throw stones.

Noticing traffic was getting heavier, he headed back out. Still early, he should be fine. Alex was so qualified for this job. When his former company downsized he had been given the choice to relocate or take a severance package. So, a little too confident in his ability to land a better position, he took the severance; which was nearly gone now. Why so slow? Exasperated, he yelled out his window to the car in front, " Hey- that's as green as the light's gonna get!" The driver's response came in a non-verbal hand motion.

Suddenly he felt his body lunge forward then back against the seat. Alex found himself sandwiched between the car he rear-ended in front of him and the one behind who rear-ended him. Before any of them could get out of their cars, a cop appeared and said if everyone was ok and if cars were operable, to please move them over to the side. Upon inspection they found it was just a fender bender and not too serious. The guy in front of Alex was looking for an argument, and the lady behind him was in tears. The policeman calmed everyone down and said this is a no-fault state for rear end collisions so each would contact their own insurance, provided there was no drugs or alcohol involved. They followed his gaze toward the crying lady, as she initiated the rear-ending.

" No- oh, no-nothing like that!" realizing the implication. " I guess my foot slipped. I just got off work and I am not used to the graveyard shift and-I'm so sorry."

The officer looked a little skeptical. Then Alex recognized her, "Actually, I can vouch for her. I was just at the Sunrise Diner and she was my waitress-told me her shift was ending."

Satisfied, the officer told her to be more careful, and move along. The young woman thanked Alex, and he apologized for being rude earlier.

Karma restored, but interview over. Alex decided to drive there anyway, maybe an explanation was better than a no-show.

Who am I fooling, thought Rose, I cannot work all night, see Ally off to school, get the housework done AND sleep before school's out. Someone could've been hurt. She would have to find another job. Maybe moving in with her mom wouldn't be so bad for a while. She was just so determined to make it on her own after Sam left. But mom would love having Ally around. Rose tried to start the car but nothing happened. She tried again and all of the panel lights came up at once- green-blue-red. She looked skyward and said, "Ok- I won't even drive home!" She got out her cell. "Mom," she started, " I've been in an accident. I'm fine, but the car won't start and I need for you to go take Ally to school. I know- you're right. We would love to come stay with you. I'll get a tow-talk later? Um...thanks mom. "

"Good Morning, RJ Hastings, hold please." Margo pressed hold then picked up the next line, " Mr. Hastings can speak with you now." She pressed the green light button that lets Mr. Hastings know which line to pick up, then back to the first. "He's on another call- here's his voicemail. " Margo had worked for RJ for 10 years. Her online business she had been developing on the side was growing and she felt ready to fly solo. RJ was disappointed, but wished her well. He was a great boss, but an even better father-in-law. When Jack died, she and RJ grieved together. He gave her a job and paid more than her experience warranted, but she soon proved herself worthy. She would always be grateful, and happy to have him still in her life as her son's grandfather. She gathered the resume folders. She was hesitant to toss out the one who didn't make it in, on paper he was exactly what they were looking for. She brought them out to Renee to file when the door opened. A man approached the counter explaining that he had an interview with Mr. Hastings, and although he knew it was too late , he just wanted someone to know what had happened.

Margo listened while he explained, and watched him thank the receptionist and turn to leave, then interrupted. "Alex Marshall?" He said he was. " I'm Margo, Mr. Hastings' assistant. Please, come in."

Alex followed her into the office and she said, "I reviewed your resume earlier and saw your qualifications meet all of our criteria. Moreover, the fact that you came here knowing it was too late just to let us know what happened, speaks volumes. Perhaps I made a scheduling error..... wait here."

Alex didn't know what to say but thank you. Gotta love that karma.

Margo smiled as she glanced back at him. He will fit perfectly, she was sure of it. She finished packing her personal things into a box , feeling good that she was able to do one last thing for RJ.

He hated medical waiting rooms. Everyone was....sick. It really triggered his OCD - he could literally feel the germs landing on him. Too many hands have touched too many things. He pulled the sleeves of his jacket down further over his hands. He saw the back of his Apple watch flashing its green light, which was a heart monitor. What is wrong with his heart? Is it an irregular heartbeat? What if-

"Kevin Jameson? " the nurse shut down his panic, " The Doctor will see you now." Kevin followed her to an exam room. Those were even worse. Sure, they pulled the paper down and tore the 'used' part off . But did they pull it far enough? Did they wipe down the vinyl part? And the chair he was in now? Just as he felt himself jump to find a safe place to stand, the door opened and Dr. Anders came in.

"Hello Kevin, " He said motioning with his hand, " Please- sit. I'll get to the point. I'm afraid the test results were not favorable. It's malignant. I'm going to refer you to an oncologist here in the building, make an appointment......"

The doctor continued talking, but Kevin could only hear 'malignant' echoing in his head. All this time he is so concerned about germs.... and he gets cancer. It wasn't even caused by an outside source -like smoking or something. Just a lump on the side of his abdomen....coming from his liver. Somehow he was standing outside in the building's courtyard, but he didn't remember walking there.

Kevin needed to get home to think.....and tell his husband. He waved his hands as if pushing thoughts away and turned to leave but bumped into a woman carrying a box that now spilled all over the ground. He bent to pick things up. " I'm so sorry. " he started. " I- I was .... Oh, I've broken your frame."

Margo took the frame and pulled out the photo. "No worries. The picture's the important part, and it's fine. It's always good to think positively, don't you think?" The man stared at her, filled her box haphazardly and was on his way. As she stood up she saw the man from earlier that day waving to her from a food truck. Alex mouthed 'thank you ' and bowed to her with folded hands. She smiled and called out, "My pleasure." and ran to catch her bus.

Alex stood in line to grab lunch, incredibly happy. The woman in front of him looked familiar. It was sock lady! He tapped her on the shoulder, "Excuse me, but -you have a sock on your arm." Jenna looked at him oddly then at the back of her left arm- and there was her son's missing sock.

"Wow- so I have worn this all morning and no one said anything. Darn static...hey,-" she looked up, "- Wall Street! You were in the diner this morning, right?"

"Uh, the Sunrise Diner -yes. But, Wall Street? No- not me, I'm a Research Scientist, oncology. I work -right here, in this building." Alex said proudly.

"Scientist, huh? " Jenna said, mentally confirming her mistake. " Well, thanks so much", she stuffed the sock in her pocket, sat on a bench in front of the fountain to eat her lunch as she watched a mother and daughter at the water's edge.

"When the music plays the lights in the water magically change colors?" the little girl asked in amazement.

" I wish our water had lights. Time for work?."

" Nope," smiled Rose. "I'm going to find a job where I can work while you're at school!

The little one squealed and smiled. " You know, I'm kinda glad the car broke- I like riding the bus."

"Me too," Rose agreed. She hugged her daughter tight and they slid into the seat across from Margo, looking out the window where Jenna was eating her lunch, Alex was paying for his and Kevin walked quietly back into the building to make an appointment, trying to think positive.

Receive stories by PK Brannon in your feed
PK Brannon
Read next: The Moon and The Sky