The world will make you brave 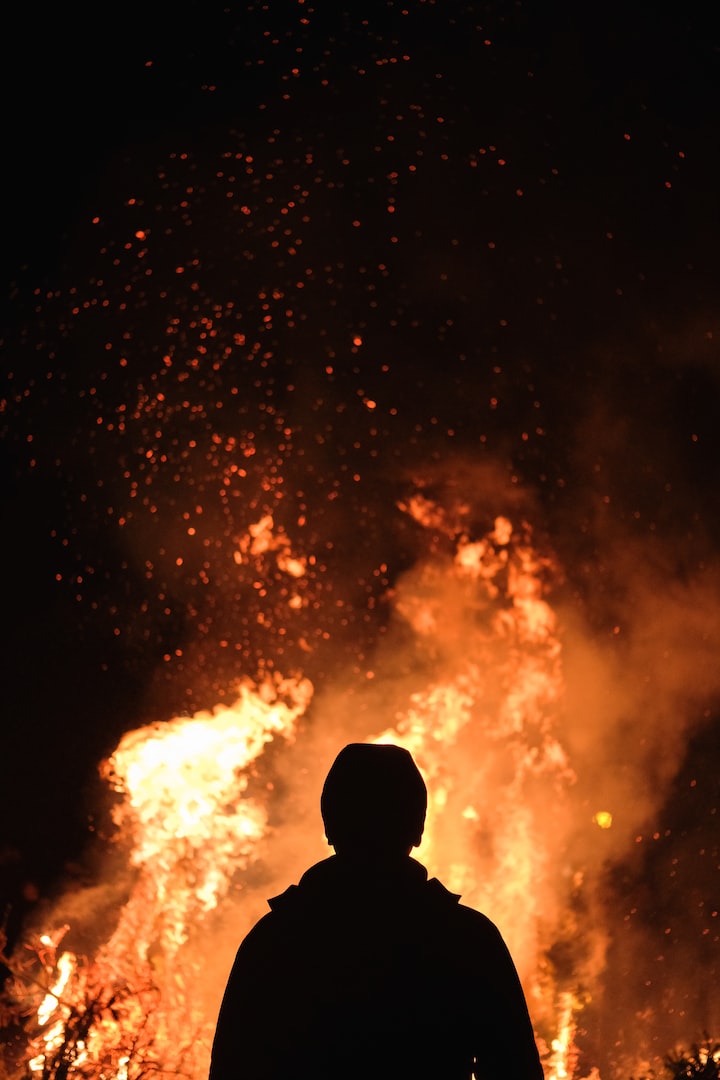 The world ended in fire.

She saw it everywhere: red all around her, all-consuming, devouring everything in sight. Flames flickered and danced into the night sky, flashes of brilliant orange and red streaks that dissolved into a thick cloud of smoke and ash. The dead littered the streets, slaughtered in their attempts to run away.

But you couldn’t outrun death.

She couldn't breathe. The air filled her lungs with smoke and the noxious fumes of burning flesh as flames tore them apart, the smell burned her throat with every gasp of breath. She heard nothing but screaming. Loud and thunderous and interlocking with the roaring flames. Screaming everywhere. Screaming for a help that wouldn't come.

“Mama!” Her voice was lost in the noise. “Father!”

Something knocked her over the head, and she was lost in a sea of nothing.

Drenched in sweat. Gasping for breath. Consciousness reclaimed her. Slowly but surely.

Her head pounded, a heartbeat in her ears while her eyes adjusted to the environment around her. There was nothing but darkness. No more screaming. No more fire. Nothing but the cool evening sky, peppered with stars. The air was crisp and clean, no hint of burning or smoke.

Too good to be true.

A tug on her hair snapped her head back. Something cold pressed to her throat.

She groaned, the pain in her head blinding. Her senses returned, and she blinked in the staggering darkness.

Her father’s face was the first she saw, quiet and stoic, a ghostly pallor hidden beneath his determined attempt to not show fear. Her brother kneeled beside him, staring blankly at a body lying before them, a pool of blood beneath her.

Her mother was dead.

The realization drew bile to her throat. A horrified sob escaped her lips. Something fierce and feral awoke within her, and she fought and strained against her bindings. A heavy hand struck her, and she fell to the ground.

But there she was, dead in front of them. Just this morning they’d had one of their usual arguments. It seemed so petty and insignificant now, especially since she could still hear her last words to her mother, the all too trite reckoning of ’I hate you’s and ‘you’re the worst’ ringing blatantly in her ears.

“Ava, look at me.” Her father’s strong voice pulled her back. He wasn't afraid. He never was. She was the one trembling like a frightened child, the knife shifting against her skin, drawing blood, but she didn't care. Her mother was just laying there. Surely she’d wake up any second, an attempt to teach her a lesson somehow about respecting your parents because wasn’t that always the case? It was just a joke. None of this was real-

Somehow she knew, no matter what she told herself, her mother was gone. There was nothing she could do to see her again, to hear her. No more smiles or reassurance that everything would be okay in that way that only moms could comfort.

She looked at her father. The man holding him jerked his head back. He was dressed all in black, a tattered ski mask covering the majority of his face. She wondered what sort of man lay beneath it, what sort of monster hid beneath a mask and killed innocent people.

But most monsters didn’t wear masks. She’d learned that after the Dark War, when the government had fallen, when world leaders had fought for power and the power had proven too great. Wasn’t that why they’d taught history in school all those years ago? To avoid repeating its mistakes? Now it was every man for himself. And man had decided the only way to survive was to ensure you were the last man standing.

The words caught in her throat. Tears spilled despite her attempts to hold them off. She was scared, terrified. She couldn't speak.

“Be brave, little bird. The brave man lives as the coward decides.”

Those were her mother’s words, always an echo in her mind. It hurt more to hear it now knowing her mother would never say them again.

“By blood we are all bound.” The masked man said.

The masked man pressed the knife to his throat. “By blood we are unbound.”

He slid the knife in a slow, deliberate neat line.

She forgot how to scream.

She stared in sheer horror as blood gurgled from her father’s throat and mouth, his eyes glossing over, staring at her mother one last time, the life leaving him before he hit the ground with a deafening thud.

“May darkness claim you.”

Often, she’d think of all she’d lost that day. Even now, years later, the final memories of her parents made her heart ache fondly. The world had continued to fall after that day. The Reavers had taken over, ruling through fear and chaos in an unstable world that had no choice but to obey. If her parents could see her now, joining the very group that had taken everything from her, she wondered if they’d be ashamed or disgusted.

The world is different now, she thought to herself, seeking some sort of comfort in the path she’d chosen. It’s kill or be killed, and you decided long ago that you wouldn’t be afraid.

“That should be the last of them,” one of the Reavers said. They didn’t have names anymore. There was no reason to get to know those that fought beside you when not everyone was promised to see the next day.

She stared at the wasteland around them. Another city left in ruins, buildings crumbling and falling apart. Cars everywhere abandoned and forgotten. There had been no point in escape, everyone learned quickly, when there was nowhere to escape to.

“Search the area!” The leader called out. “Take no prisoners!”

Guns were rare, bullets rarer. Most used swords, knives, anything they could get their hands on to strike fear into the hearts of others. She remembered playing with wooden swords, sparring with her brother in another one of the moments she’d taken for granted. He hadn’t survived long among the Reavers. Too soft, too caring, he hadn’t been able to harden his heart quick enough before they killed him.

The silence was unnerving after seeing the destruction left behind after an attack. She was one of the few that held onto memories of life before the war. Memories of Sunday barbecues, playing with her brother in the front yard, recreating all the stories she’d loved to read as a child. Walking down the street, she saw no sign of life. Trees were bare, grass was dry, the roads were cracked and chipped, potholes everywhere. Funny to think this all started with one person thinking he could rule the world. How quickly they had learned how false this was.

Keep moving, she thought, unnerved by how easy it was to remember her previous life. Don’t look back. All you have to do is find something, anything that might be useful, and you survive another supply run.

A noise made her jump. She spun toward an alley, where a dog sniffed at a trash can. It looked like it hadn’t seen a meal in weeks, more bones than anything else. Its fur was clumped and matted, a desolate look in its starving eyes. Slowly, she approached. She couldn’t remember the last time she’d seen a dog that wasn’t out for flesh like the ones the Reavers favored.

Upon hearing her, the dog bolted down the alley. She cursed under her breath and started back out. The longer she took, the more likely she’d return empty handed.

Her blood ran cold. Slowly, she turned around and saw a little girl clambering out of the trash can the dog had been searching. Her clothes were torn, her face and arms covered in dirt and her hair a tangle of knots. She couldn’t have been older than 7 or 8. An orphan, she suspected. Somehow lucky enough to avoid having been caught by the Reavers.

Her arms were as heavy as lead, the sword slipping from her sweating hands. Her heart pounded in her ears, threatening to burst.

“Who are you?” The little girl asked. She rubbed her tear-stricken eyes with the back of her hand. “Where’s Mama?”

She caught a glimpse of something silver reflecting off the beating sun, not taking her eyes off her so she could see what the girl was so determined to hide in her fist.

“Mama said they were coming to save us.” The girl said. “She said she’d come back for me. She promised.”

She sighed. So many broken promises and false truths. The world wouldn’t get better. The sooner everyone realized this, the sooner the pain left you. “Your mother is dead. If she’s not back by now, she’s not coming back at all, kid. You should have gone with her.”

The girl stared at her. “You’re one of them.” Her eyes widened in horror. “One of the bad people.”

It was far simpler in a child’s mind. There was only good and bad. But the world was so much more complex than generalizing it into two categories. Sometimes you had to do things you weren’t comfortable with just to survive. There were no rules anymore for what made someone good or bad. There was only survival.

“Please,” the girl whimpered as she got closer. “I don’t have anyone. I’m all alone.”

Me too, she wanted so desperately to say. Despite joining the Reavers and being surrounded by people every day, she was alone. She should have died with the rest of her family. At least then she wouldn’t have had to hurt anyone. But she’d taken the coward’s way out, lost in a sea of guilt that suffocated her and filled her with nothing but remorse no matter how she tried to deny it.

Every decision had made her who she was. And it felt like she was always choosing wrong. She lived her life out of fear, choosing the Reavers to ensure her own selfish survival while thousands of people had lost their lives for refusing to follow her path. The sword in her hands felt like an explosive. She had to steel herself to keep from throwing it as far as she could. She knew what happened to those that disobeyed orders.

For a moment, they stared at one another. A silent agreement occurred between the two, a mutual understanding that the only real enemy was the one they were both afraid of. The girl came forward, extending a chain out to her. She took it, then stared after the little girl as she scurried into the alleys.

Hanging at the end of a chain was a locket, crafted into the shape of a heart. Curiosity getting the better of her, she clicked the locket open.

It was a phoenix, surrounded by flames, wings raised at the ready. And right below, etched in fine handwriting were four words.

Rise from the ashes.

She clutched the locket, suddenly unable to breathe as a huge sob took over her and she fell to her knees. Flashes filled her mind, of the little girl she’d once been, so carefree and innocent, before war had turned her into a killer and a murderer.

She finally understood what her mother had meant all those years ago, when she’d pushed her to stand tall and face her fears.

The brave man lives until the coward decides.

Be brave, her father had told her.

And so she would be.