Part 9: Karma is a Bitch (literally)

by Liz Sinclair 2 months ago in Series

The last chapter of the Vocal Creators Saloon series 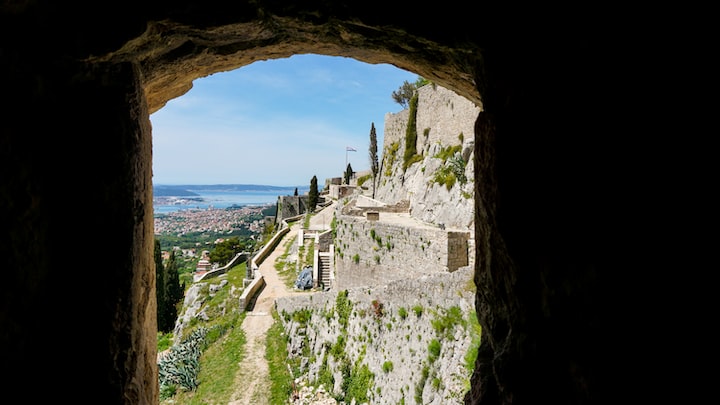 Photo by Archana Reddy on Unsplash

Part 3: Death Has an Order

Part 9: Karma is a Bitch (literally)

A gusty chill blew into Ivano's tiny shop. He looked up and saw her closing the door behind her. Rhiannon Blaset. The woman with Death at her shoulder. She looked smart in her green coat and black hair, lips perfectly red with no smudges, her eyes smoky dark. But something was off. Her fingers with their short red nails played with the ruby-studded gold scalpel pendant at her neck. Ivano stared at her. He could see the dark red shimmer around her head, like a bloody crown. His gift and his curse was to see the signs of imminent death around people. Ivano always saw the that familiar red halo around Rhiannon Blaset although she continued to visit his shop in good health. He'd figured out that she must deal in death, and bring it to others, if the signs weren't for her.

Nervous? Rhiannon Blaset nervous? Ivano frowned, his heart beating faster. A few beads of sweat broke out on his brow. When a killer was nervous, that was never a good sign. He took a deep breath.

"I need your help, Ivano" she said, her voice pitched low, "It's a matter of life or death."

"No, no, Ivano. You mentioned once that you had a nephew who works for the Bulgarian mob," Rhiannon said.

Ivano looked horrified. "I haven't spoken to him in years," he said.

"Can you put me in touch with him?" asked Rhiannon.

The FBI agent was explaining for the fourth or fifth or sixth time why he needed to install the wire himself. He'd lost count.

"Look," interrupted Rhiannon. "We're doctors. Surgeons. We know how to follow procedures. I can put this on myself."

The FBI man glared at her. "Hey, I'm just doing my job," he said sounding testy. "If the wire isn't working properly, we lose the case. We only get one shot at this."

Amar held up his hand at Rhiannon behind the agent's back, making a stop gesture.

She sighed and relaxed her arms by her side. The man continued to fiddle with a wire that snaked up her side, inside her blouse, and ended at her bra. The agent clipped the tiny microphone to the top of one cup.

The man went red, but didn't reply. He finished setting the wire in place and stepped back. "OK, you can do up your shirt. I need to see if it's visible," he said.

Rhiannon grimly re-buttoned her top. The agent stared at her breasts for a minute. Rhiannon felt a surge of annoyance. They were wasting time. She needed to get inside the tech billionaire's mansion to the Doctors of Hope meeting.

Rhiannon turned away with a snort. "Let's get this party started," she said.

In other news, over the weekend, the FBI conducted a sting operation on a group known as Doctors of Hope, making multiple arrests. The FBI have been investigating the group for some time and were able to obtain a recording of one of their secret meetings with the help of an informant. The recording detailed plans to commit crimes including euthanasia and involuntary sterilization against minority groups through overseas medical programs sponsored by Doctors of Hope, which operate in some of the poorest countries in the world. FBI Spokesperson Carla Davies said that members of the organization will be charged with human rights violations, aggravated assault, conspiracy, fraud, attemped murder and first-degree murder. All Doctors of Hope offices abroad have been closed, and there are isolated reports of program offices being burned and staff assaulted in response to the news. The whereabouts of Sahan Persaud, Doctors of Hope's alleged leader, are still unknown.

Amar, Clyde and Rhiannon sat at a table in a trendy new bar in downtown LA. A half-drunk cappaccino and an empty beer glass sat in front of them. Rhiannon slowly sipped a glass of red wine.

They were watching the news on the TV behind the bar.

Amar fidgeted with his cappuccino. "So where is she now?" he asked.

"Still care?" taunted Rhiannon. "You know she preferred to be with me."

Amar winced. He'd forgotten that they'd both been lovers with the same woman. But he was hardly going to feel jealous. Not now.

Rhiannon turned to face Amar and looked directly into his eyes. Her fierce gaze bored into him. "Doctor Amar, " she said, "We have a body that's infected with cancer. We've already cut out the metasizes. All the lesser players are in FBI custody. Now we have to remove the primary. Drastic measures are needed," she said.

Clyde spoke. "She should be in Sofia by now. She'll be on her way to the meeting place. Once they get there, my guys will hand her over to Ivano's nephew. I'm just waiting on confirmation."

"And then she will disappear permanently," said Rhiannon.

There was silence for a few seconds.

Then Clyde smiled grimly. "Time for her to pay for her crimes," he said. "And in a very imaginative way, I thought."

Sahana stood facing a small group of men. Several of them held handguns, that were all pointed at her. They were standing in a stone and red brick church, that looked ancient. From outside, she could dimly hear dogs whining and occasionally barking. "Where the hell am I?" she said, rubbing her wrists, where were chafed and red where the restraints had dug into her skin.

"Welcome to Asen's Fortress, Mrs. Persaud," said a stocky bearded man, in heavily accented English, holding the cut zip ties that had bound her hands and the black hood she'd been forced to wear. He stood at the front of the group, the others fanned out around him. He was clearly the leader.

"What is this place?" asked Sahana, looking around, trying to appear nonchalant. She saw pews, an altar, a massive cross. The church was gloomy, adding to the tense atmosphere. Her heart was beating quickly and a few drops of sweat beaded on her upper lip.

"This was once a great fortress but now it's a church. This way, you can ask God's forgiveness for your sins," the man said coldly.

The man chuckled. "Well, perhaps then, you believe in karma, in fate. You are here to die, Mrs. Persaud. You were sent here by your friends and your husband. Or I should say, your widower."

Sehana recoiled in shock. "What are you talking about" she said angrily.

"Rhiannon, Amar and Clyde send their regards," said the Bulgarian.

Rage surged through Sehana's body and she gripped her hands into fists to stop them shaking. "You're lying," she said coldly. "Who are you?"

"My name is not important," said the man. "When I heard about the things you do ..." he stopped his voice thick with disgust, "I agreed to take care of this little problem."

"And what about what you're doing? You're no different," taunted Sehana, her voice shaking with anger.

"I only kill people who deserve to die. And in all my life, I've never met a monster like you. Clyde told me what you did to his girlfriend. Disgusting. When my uncle asked for my help, I gave it freely. You treat humans worse than animals. At least, I will give you a clean death."

Sehana could feel the first tremors of fear in her gut.

"In this place, my ancestors gave their enemies a choice of how they wanted to die. I will follow their custom and give you the same. Outside, there is a pack of dogs. We keep them half-starved so they are more .... well, effective. We will give you a head start. There is no way off this headland except the road we came in on, and my men will be guarding that. You can choose the dogs or you can choose the cliffs. It is up to you," said the man shrugging his shoulders. "But either way, you will never leave Bulgaria."

"And what if I escape?" asked Sehana, stalling for time.

The man smiled broadly. "You won't. But if you do manage, by some miracle, then I will let you live. I am honorable, after all. Unlike you."

Sehana slowed to a walk, winded. She clutched at her side as a stitch throbbed. She gulped air, catching her breath. She could hear the crash of surf somewhere nearby. In the distance, she could hear the pack baying. Sahana knew she had to find a place to hide. She laughed to herself scornfully. They don't know who they're messing with, she told herself, her chest tightening in anger. I'm the one who chooses who lives and who dies, not some jumped-up drug lord or Bulgarian thug.

She kept walking, her breathing returning to normal. The sounds of the sea were getting closer. If I can spot a boat anchored in the cove, she thought, I can swim out to it and hide. If I can start it, I'll look for a harbour. Find the police. Make them pay. Oh, they'll pay, she thought grimly. Sehana started to think of just how she'd punish her betrayers.

Rihannon would have a quick death. She thought of those those smooth, soft, red lips, and her breath caught despite herself. I would have died for you, she thought. One bullet straight between those lying eyes. But Amar. She would make him suffer. She imagined what she'd do to him with a knife. Her heart beat faster in anticipation. She'd make sure there was lots and lots of blood. And that Clyde fool. He'd.... Her thoughts broke off as the woods ended abruptly.

Sehana found herself close to a huge black expanse. The sound of the surf was loud now, crashing just in front of her. She stepped tentatively to the edge of the blackness and gaped, disbelievingly, at what she saw.

Sehana stood on the edge of a cliff, and far below were jagged rocks, just barely visible in the gathering gloom. Waves crashed and beat against the stones, the sound echoing against the stone walls.

She gulped. Oh, god, she thought.. this isn't possible. She turned back and heard the dogs now, closer, their barking frantic. The sound was moving ... towards her. She cried out, a sad, helpless sound that died away in her throat. Please, this can't be happening. Not like this, she thought as she frantically turned back and forth, seeking a way out.

The pack had picked up her scent and they bayed with renewed ferocity. Her funeral dirge. Hot tears were sliding down her cheeks. She could hear the dogs now, crashing through the undergrowth. They sounded close. Not like this, she thought frantically, looking from the cliff to the forest, and back, as the dogs closed in for the kill.

I write about travel, work and money. Sometimes fiction.

Vocal had a truly special writer, Tom Bradbury whom we lost. Please read & enjoy his work and keep his words alive.

Receive stories by Liz Sinclair in your feed
Liz Sinclair
Read next: The Kraken and the Bull