Rebuilding a Home, Recovering a Family 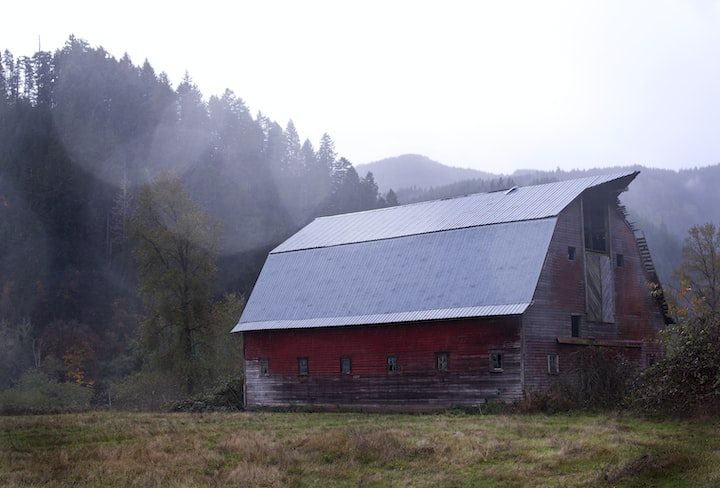 It’s been two whole decades and I still can’t get over how immense the barn doors are. I always watched dad open them early in the morning after being woken up by the rooster’s call. I wanted to say I helped, but really, I was just looking over the kitchen window as mom prepped us a quick meal. I wonder if they’re still taking care of the animals where they are. I can’t imagine dad enjoys paradise. His entire life revolved around work and if you took that away from him, he might as well be a walking corpse. And mom was never idle either. If she wasn’t running around managing everything, she’d be lounging in her chair with a heavy book or knitting us new clothes for the colder days. Both always had a cup of hot coffee in their hand, calling it their elixir of energy. I always wondered if they had an elixir of strength, or maybe a fireproof one. They could have escaped the fire, or maybe I should have slept in my room that night instead of being in the barn. Whimsical thoughts, I guess. Being in front of the barn now, and looking at the ruins of where our home was, its hard to believe I lived here and that animals roamed freely.

I always thought taking care of animals on a farm would be the hardest task, but that was child’s play to mom and dad. In fact, they always gabbed how I was the most difficult animal to take care of. And I couldn’t have been that bad. The sheep always roamed, the pigs were surprisingly quick for their size, the bull we had was quite tame, and you always had to be careful the horses didn’t kick you into a new dimension when you weren’t looking. But they made taking care of the animals seem like a dance. They’d effortlessly maneuver around each of our extended family members, tending to their needs and harvesting what we needed from them. It wasn’t easy since we had no outside help either. Apart from the wit I developed, having been raised by bookworms and needing new clothes because I couldn’t stop growing, I was fairly well behaved. Except, maybe when I would instill absolute fear in them by running to the barn to sleep on the hay next to the horses. That was probably it. As soon as I learned how to crawl, I was always heading for the barn, and by the time I could run, I would be chasing the horses. Forever, grateful that I’ve never been kicked.

I didn’t realise it back then, but our solitude wasn’t by choice. My parents came from a line of farmers, from distant lands. Their sun-kissed complexion contrasted the rosey porcerlain skin of the locals. Their parents had managed to work the fields and educate themselves. Somehow finding work in a foreign land and eventually meeting their partners. Decades later, my maternal grandparents would return to their homeland, sending mom to the only university in town. They never wanted her to get into farming, but life clearly had other plans. My paternal grandparents were still around at the time but they were both heavily injured from a car crash they had been in. Even with deteriorating health, they did all they could to make sure dad could focus on his own life. They didn’t live long after, but long enough to know that dad had found a woman that put many of their worries aside.

They weren’t born geniuses, but both parents were instilled with curiosity, a commitment to learn, and the superpower of experiencing failure without being demoralized. Studying science and agriculture to get in touch with their roots, their passion is what ultimately made them successful. Work wasn’t taxing to them as they’d be elated discovering what generations before them knew all too well but couldn’t explain. Eventually they hit their roadblocks. Even though they were successful in the world of academia, they weren’t recognized for their efforts. Often receiving minimal funding for their projects or passed on positions, they couldn’t escape what they looked like and therefore how people treated them. Exhausted, they latched onto the opportunity to buy a farm and just keep to themselves.

The countryside was even worse than the urban city center, but they had each other to deal with the minor frustrations. There was never any proof, but it was suspicious how we’d have sheep go missing from time to time, or how the wolves would only be spotted on our property. Foul play was afoot, but they knew the law enforcement wouldn’t do much either. All the incidents were minor, many I was unaware of until the fire happened. That was just a step too far, and I’ve hoped every night since that whoever was responsible suffered the same fate. They never did find my parents’ bodies, but there’s no way they could have survived the inferno that engulfed our home. The flames had awoken me from my hay bed, only to witness a crimson red night sky. I freed every animal in the barn, along with some of the nicer neighbours that ran over to check on the situation.

That was the last time I was here. It was a cold winter night, and as they drove me away, I could see the home and barn burning, lighting up the frozen pond to add to the chaotic scene. There’s not much left now. Standing in front of the barn, I can still see inside it … through it even. The doors offer no protection to the barn itself anymore. All charred, with specks of red paint still intact, yet missing significant panels. I wonder how many animals sought refuge here once the fire was put out. The roof that sheltered me from the rain is practically gone, letting the sunrays illuminate burnt lumber and dry ground.

Two steps in and all I have managed to unearth all the dust that laid settled for years, blurring my vision. Ah, this is the spot. Where I would curl up next to the belly of Dash, a horse that looked half beast, but was gentle to the touch. That’s odd, it feels colder here than anywhere else, and the dust hasn’t settled either. There’s no reason for there to be a draft here. Scouring the ground for a source, I’m left kicking up more dust and coughing uncontrollably. I find it! The hook used to anchor Dash to his stable, is also a latch. Dusting the areas around it, the edge of the trap door is uncovered. Must have been hidden under the hay and dirt all those years ago for me to not notice it. Why would my parents need a trap door in the barn?

Curiosity took control of my movements as I was lifting the latch before I could even realise what I was doing. Would there be treasure? I was hoping I could find pictures of us, or maybe even their old books. Opening the trap door let out a gust of frosty air. The goosebumps on my skin seemed out of place against the heat I experienced moments ago and could still experience if I moved a couple steps. There was a ladder and what looked like a well-lit room. None of this makes sense. None of it.

Resolved to see this through, I steady myself down the ladder. Turning around, I don’t know what to make of it … I see, I see me. Versions of me as far big as the room was. In various stages of development, suspended in these clear cannisters, I was in some type of sci-fi scenario. From embroyonic development, infancy, childhood, adolescence, all the way to an old person, these cannisters gave me a view of what my development was like or what it could have been. Some were tall, some were muscular, with none of them looking exactly like me, but they were all still me. What am I, then? Who am I?

Exploring all cannisters, trying to make sense of my current reality. I came across a frosted cannister at the back. The layer of frost was thick, far too cold for me to melt with my body heat and too condensed for me to simply brush away with my hands. Searching around for anything to use as a tool, I must have been blind to not see the books initially. My parents had documented my growth. I was definitely their child, but more like a science project. They were able to combine their academic passions and somehow create me. There’s far too much jargon for me to understand, but I need answers. Hmph, I guess I was the most difficult animal that they had to look after.

Tools! One of these knives should do well to scrape off the thick layer of frost. Hacking away at the frosted cannister, it is unlike the others. The insides filled with tubes, connected to whatever was in the center. As I uncovered more of the cannister, reality set in. My parents, clearly healing, yet somewhat still charred were recovering in this cannister. How much longer would they need? All the indicators on the cannister’s control panel gave a date of February 26th, 2023, but that was 15 years ago. Maybe someone had to maintain the cannister from the outside to have it working properly? Having returned to the barn to rebuild my home, I have a lot more work cut out for me to recover my family. I pray the books guide me well enough to get my parents out of here.