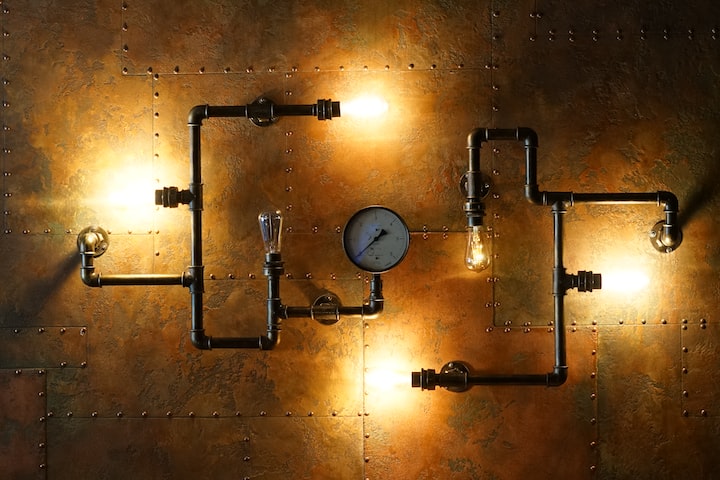 They installed the exhibit with much fanfare but that was years ago now. No more write-ups in international news, no more lines of visitors queueing to descend the stair. These days the contents of the High-Pressure Deep Sea Environment Tank warranted but a few items in the gift shop, and those outsold the tank's actual visitors by a large margin. People preferred the cartoon version to the real thing, it seemed.

Yuri had a season pass to the aquarium, and never bought anything from the giftshop. She tried to make it in a few times a week; sometimes just once if work was busy but more often two, three, or even four times. She preferred going on weekdays after she finished work. There was a window of time between her leaving the office and the aquarium closing where the tourists and the school groups had already left and it wasn’t worth paying full admission for the hour or so until the tinny PA system played Auld Lang Syne and the staff ushered patrons towards the doors.

It was late summer with the evening light flowing molten gold when Yuri flashed her season pass and pushed through the turnstile. It was Tuesday. Tuesdays were a good day to visit because there were no shows. Her sensible office shoes clicked against the tile as she walked past the cylindrical tower of the Eel Tank in the lobby and its bouquet of morays gawping from nooks and niches in the rock, as if in a state of constant surprise. She clicked past the Surface Enclosure and the sealions sunning themselves like pensioners on a park bench. Past the giftshop; rows of hats and tshirts and bric-a-brac bearing cute cartoon representations of the aquarium’s exhibits. The morays, the sealions. The sharks and dolphins and stingrays and sunfish. The aquarium’s pièce de résistance, the whaleshark. And yes — there in a corner — the resident of the High-Pressure Deep Sea Environment Tank, rendered in smiling cartoon form.

Yuri clicked her heels past the door leading outside to the Dolphin Enclosure, past the darkened Jellyfish Room with its mood lighting and ambient music. She clicked past the Open Water Tank and the mouth of its tunnel walkway. The Open Water Tank was the biggest draw of the aquarium, the largest seawater tank in the region. Shoals of brightly coloured fish flit between live coral; lone sharks prowled relentlessly, snaggle-toothed and staring; bluewater fish streaked back and forth at impressive speeds, flashes of silver; and over it all loomed Bertha, the whaleshark, eliciting gasps and cries of amazement when she hove her stately bulk over the walkway tunnel. A whaleshark seen from below defies context: it is deliberate like a boat, sleek like an aircraft, and yet neither are apt comparisons because it is unmistakably alive. A slow, peaceful beast, it was popular and extremely marketable. Marvel in awe at its size or coo in delight at its placidity. Education and entertainment. Something for the whole family.

Yuri’s heels clicked past the Open Water Tank without so much as a sideways glance. Past the knowing eyes of the Giant Pacific Octopus Enclosure, past the Petting Pool. All the way to the back.

In the back wall was a door with a sign, easily overlooked. Many guests didn’t give it a second glance. A closed door in a public venue reads to the layperson as staff only, even when signage points to the contrary.

Yuri didn’t break stride, pushing the release bar and walking through. The clicking of her heels became hollow in the echoing of the bare concrete stairwell. The air was damp and winter-cold. Her breath caught in her chest as it always did when switching to the frigid air. She took two deep breaths and — breath pluming in the chill — went down the stairs. The clicking of heels on concrete turned to the hollow ringing thuds of bare metal steps.

Thick rubberised insulating paint in cheerful white and blue soon gave way to grubbiness, then gave up altogether and faded to bare concrete. Fluorescent lighting buzzed. Three levels of clanking metal steps down and Yuri reached solid flooring again. Grimy water dribbled down the walls and collected in murky puddles that the cleaning staff had stopped concerning themselves over.

The space was designed for crowds, with a concession stand built into the wall and guiderope stanchions for directing queues — all long-disused. Mildewed signs listed facts and hypotheses with accompanying diagrams. One of the sunken fluorescents in the ceiling flicked and strobed, going dark before visibly marshalling its energies to twang back into life.

The room was dominated by a large portal covered with heavy blackout curtains overlapping to form a lightlock. Yuri clicked her heels past the theme-park detritus to push through the curtains into the cavernous darkness beyond.

The darkness always took a minute for the eyes to adapt. Low-output red lighting was designed to give human eyes as much to see by as possible while protecting the eyes on the other side of the glass.

This was the domain of the High-Pressure Deep Sea Environment Tank.

The High-Pressure Deep Sea Environment tank was a marvel of engineering, custom-built for the aquarium upon its securing of the specimen for display. Other high-pressure tanks had been built for other aquariums — to display anglerfish and the occasional abyssal octopus — but nothing even remotely on this scale. The tank maintained a steady pressure of 800 atmospheres and a temperature just a hair above freezing. The same conditions that would be found 8,000 metres below the surface of the ocean, over twenty-six times deeper than the test depth of a modern military submarine. The conditions of the seafloor where its single occupant was found.

She lay on the floor of the tank as she always did, unmoving but for her steady gulping of water. Each breath seemed to be an enormous effort that made her whole body jerk and rise from the grey muck that lined the floor.

It was easy to see why the aquarium had wanted the world’s first live mermaid, and equally easy to see why she was not popular after the novelty had worn thin. She lay fully twelve feet long. Pallid grey flesh sagged unwholesome in the ruddy near-dark of the viewing room. The noseless face with its saucer eyes and pegtoothed gaping mouth, endlessly sucking water over flaccid gills. Her lidless black eyes stared forward endlessly. Who knows what manner of beast or world those eyes had seen down in the gulf of perennial darkness she called home.

A throat cleared in the dripping silence, causing Yuri to jump.

Against the back wall stood an older man in an aquarium coverall, his thinning grey hair balanced by a drooping moustache.

Yuri shook her head. “No problem.”

“Just wanted to let you know I was here, is all.”

She flashed the man a tight smile and turned back to the tank. She preferred to spend her time down here alone.

“What?” Yuri was suddenly aware of being in a dark, secluded room at the bottom of a little-used stairwell. She kept her gaze firmly on the tank and the beknighted creature within.

“Oh, I don’t mean anything by it. The staff, we notice the regulars. You come here most every day, and just to see,” he gestured at the thing in the tank, “her. It." He smiled and winked conspiratorially in Yuri’s peripheral vision. "You know, we’re not supposed to call it ‘her’. Aquarium rules. Have to say ‘it.’ The head honchos were worried about people making accusations of slavery if we humanised her too much.”

He chuckled. “Not much chance of that, when you look at her. I've worked here since they brought her in and she still gives me the heebie-jeebies.”

Yuri stood still, looking at the tank. The man had left space for her to reply, so when she didn't the moment stretched. The man cleared his throat again.

“Aw hell, you didn’t know?” He gestured at the mermaid, still in the same position, staring straight ahead and gulping water in her herky-jerk manner, “they’re shipping her — it — off to some research institute tomorrow.”

“What?” Yuri’s voice was louder than she meant it to be, and too shrill.

Yuri took a step towards him. He, very slightly, took one back. “Which aquarium are they taking her to?”

“Some place in Seattle, I think. Somewhere around there. But it’s not open to the public.”

“Just comes down to money, at the end of the day. All this equipment, and nobody comes down here anymore. The aquarium can't justify the cost.”

Yuri turned back to the tank glass. Behind her, the man retreated to the blackout curtains.

“I sure am sorry, miss. I’ll miss her too, if it’s any consolation.”

He ducked out through the curtains. Yuri heared his footsteps tap across the empty lobby to clang their long way back up the stairs to the main hall.

She looked at the vast, ungainly beast in its bare and unlovely tank. The grey muck that lined the bottom was carefully judged to be as accurate as possible to the barren seafloor wasteland that was the mermaid’s natural environment. Her inactivity was exactly what would be expected of any marine fauna of this size living in the abyssal zone. There was as much light as could be permitted without it damaging her eyes.

But in the end the calculus could not be balanced in a way that made people enjoy coming down here. Not enough to draw the crowds needed to justify her existence in this place. Once people knew what a mermaid actually looked like, how it lived: they lost interest.

Yuri looked at the mermaid gulping its water and staring uselessly. An ugly, awkward creature. If it were released from its tank and had total freedom it would be doing much the same as it was now, just at the bottom of the Atlantic rather than in the basement level of an aquarium. Creeping around on her hands in the freezing dark to snatch the occasional crab, but for the most part lying still and conserving energy.

Yuri imagined placing her hand against the tank and the mermaid on the other side of the inches-thick glass doing the same, imitating the gesture like a scene from a prison movie, them sharing some fleeting connection or understanding that crossed the species divide, each letting the other know I understand you.

But it was only an idle fantasy. The mermaid would never return such a gesture, and Yuri would never make it in the first place.

She stayed in the dark room and watched the unmoving mermaid until Auld Lang Syne played over the tinny PA system.

More stories from Madoka Mori and writers in Fiction and other communities.