Try Zipfizz Energy as an Alternative to Your Usual Canned Drink

by Jeffrey Fontanos 4 months ago in product review

The Time For Healthy Energy Drinks Is Now. I Guarantee You Won't Go Back After You Try It.

I remember having one of these Zipfizz tubes being passed to me by a family member. I was complaining about being tired and not getting enough sleep. We had to attend to a serious matter. I went to a corner store gas station, but they didn't have my usual choice of energy drink there. My cousin tells me, "Oh! why didn't you say anything? I have one of these with me. It's cool, take one. Just mix it with water." 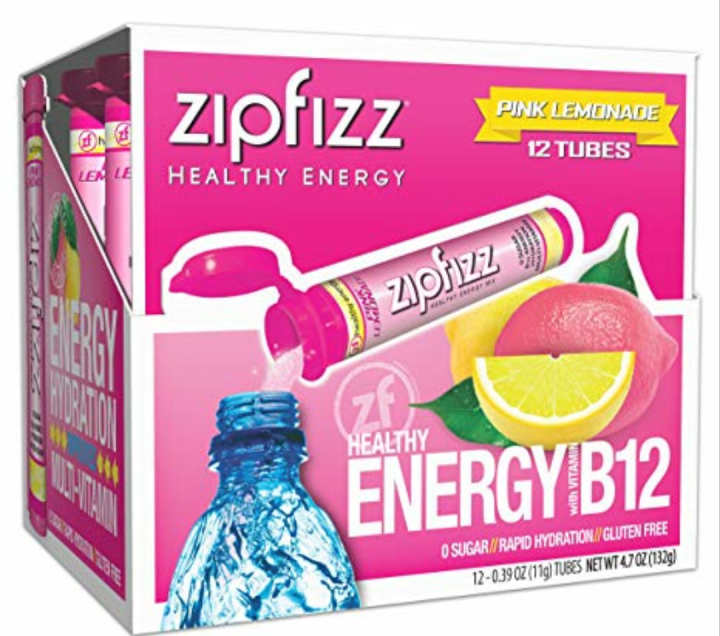 First flavor I tried. You can also order boxes that only have you flavor of choice. (from amazon.com)

Her being a Seahawks fan, she tells me she tried it out because Marshawn Lynch endorses it. We're from Seattle, so anything that has a Seahawks stamp of approval is good by us. Another plus was the vitamins and hydration it gives you. I'm looking at the tube and I see B12 vitamins which helps things like brain function. It helps produce red blood cells, which help produces a healthy digestion and many more benefits. It also has Vitamin C (833 percent of vitamin c) We all know what vitamin C does. Also it has a whole lot of potassium, 950 mg of it. I'm obviously no doctor, but the main thing about potassium that I know it does is help with your muscles and will lower your blood pressure and help prevent a stroke.

So I take the drink. It was as easy as going to the water cooler, filling it up, then opening the tube and pouring it in. I feel wide awake in under five minutes. I'm ready to focus on what I want to do. I wasn't jittery, hyper, nothing. Just legit energy (legit energy... hmm, good slogan for them.) I was not souped up on the usual sugar/caffeine combo energy drinks of the old days used to give you. Best of all at the end of the day, after I wrote a few blogs, cleaned my room, did a little grocery shopping, and did laundry, I DIDN'T CRASH! This was the most amazing part of the product. I did all this from a little tube. I'm somewhat of an energy drink connoisseur. I would always get the jumbo sized cans back in the day because of the big days I knew I was gonna have. Usually between my day in doing all my tasks I'd usually crash. I'd either drink more of the big can or when there was none left I would buy a soda. Now I'm close to $10 of spending right here. This was me two days a week, sometimes even more. At Costco, 30 tubes of Zipfizz cost $30 (Not including tax). Now if you're bad at math, that's 30 days of your caffeine fix for one dollar a tube. I am clearly getting more out of my old $10 a week budget. This little tube has way more power than those canned drinks I used to consume. I'm happy a company like this is out there offering an obviously better and healthier alternative. Its time for them to step up or get left in the dust. Let me talk to you about taste and after effects to. 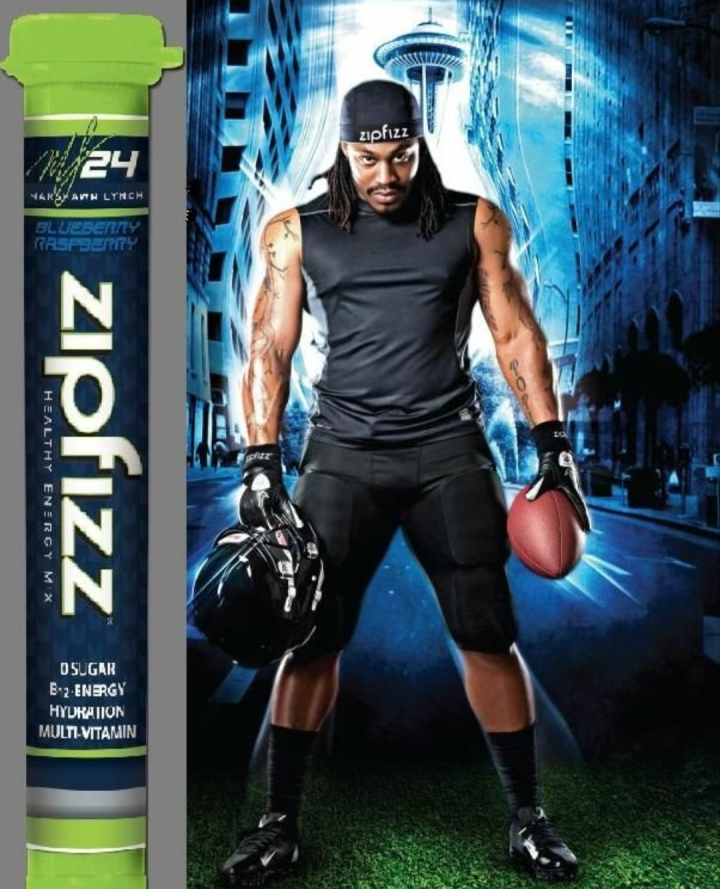 Former Seahawks Marshawn Lynch and his limited edition Zipfizz flavor. (Cases of these have been sold online going for triple digits. Single tubes for around 10-18 bucks. Told you Seahawks fans are crazy!)

Other than crashing a few hours later after drinking than my regular energy drink (I say regular because of the usual assumptions tied to energy drinks over the years, such as having too much sugar, etc., Zipfizz is not the norm!), I experience... the best way to describe it is a, "post energy drink hangover," most likely coming from a caffeine or sugar overload. I find this weird because Zipfizz usually has the same amount of caffeine as regular energy drinks, but I don't ever experience the hangover. The vitamins and it having no sugar probably take that away. One of their slogans is that they're the "healthy energy drink." The no crashing or aftereffects make me believe this. Definitely a plus on the Zipfizz side, and another minus for the old fashion can.

Flavor is another big thing. Red Bull and Rockstar were my two usual go-tos for when I needed my caffeine boost. After drinking Zipfizz, by comparison the taste of those two felt like I was drinking melted batteries. (Of course I don't know what melted batteries taste like. Just roll with it.) With Zipfizz though, pink lemonade tasted like pink lemonade, fruit punch tasted like fruit punch, and so on. You get the promised flavor on the label without the melted battery aftertaste kick. Its almost similar to drinking Kool-Aid, but way better. You don't need to add loads of sugar to taste the flavor. 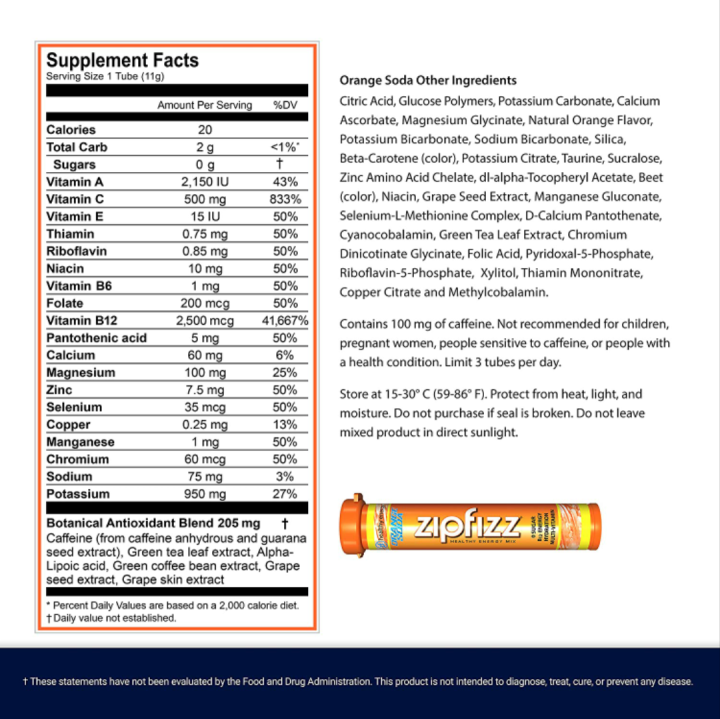 By now if I haven't convinced you to take a dive and try this product, I don't know what will. Cost-wise, it's cheaper. There are more health benefits to it. The tube is compact. All you need is a cup of water or empty bottle. You can mix it in anything—juice, soda, or water. Water is literally everywhere! I've been drinking caffeinated beverages for years. There was a time I felt like I should stop, because of all the negative feelings I was getting after i drank the canned battery juice. With Zipfizz I didn't have that "I need to stop" feeling that I used to get. It doesn't make me feel bad. This feels like the next step for these drinks, and it feels like an honest, healthier step. 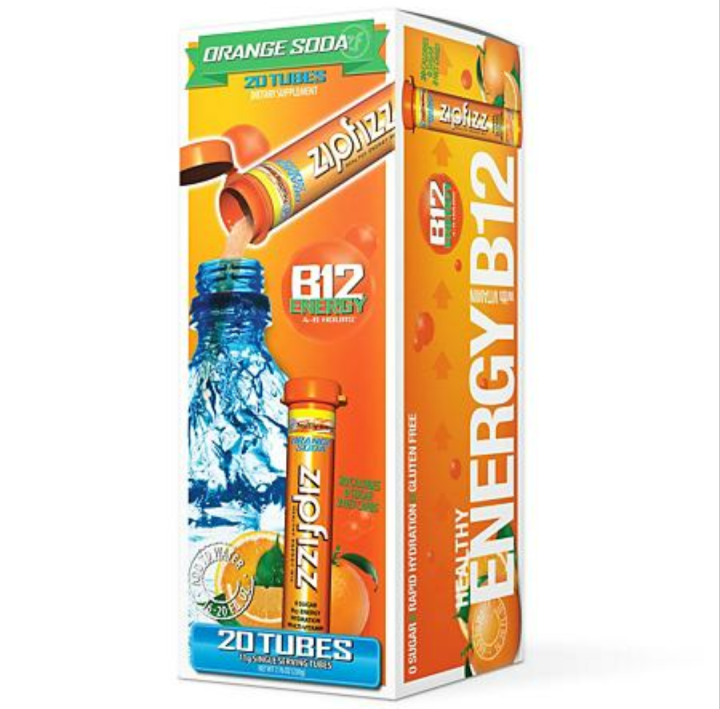