This unexpected country is incredibly vegan-friendly

by Renee 9 months ago in vegan

They even have a vegan saint! 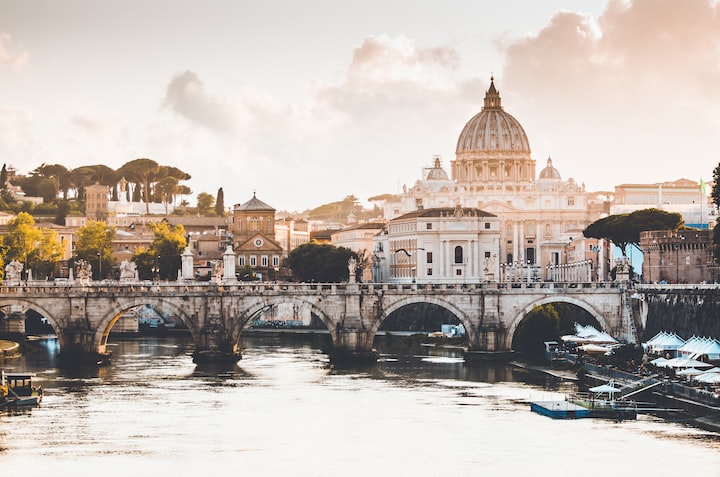 Photo by Christopher Czermak on Unsplash

Italy is well known for its culinary traditions: pizza, pasta, tiramisu... but did you know that it's surprisingly easy to follow a plant-based diet in this foodie paradise?!

I have been a vegan since 2016 and I have been lucky enough to travel to Italy several times over the last few years. Each time I lived/visited there, I was impressed with the vegan-friendliness that this country offers.

From the North to the South, Italy is incredibly vegan friendly and here are just a few reasons why:

This treasured liquid, harvested during the cooler months of autumn, is an integral part of most Italian dishes. Its rich, buttery flavor is hard to beat. Which is why it is often used instead of fatty butter.

This is what makes Italy stand out from other European countries whose dishes and sauces are often built upon dairy bases. After having lived in both France and Italy, I noticed this significant difference between these neighboring countries' cuisines. In France, many of the dishes are unable to be vegan because the French culinary tradition is so dairy dependent, but Italian cuisine is oftentimes inherently vegan-friendly.

At any restaurant you go to, there's a good chance that any contorno (side dish) you want to order will be cooked in olive oil rather than butter.

Olive groves, fruit tree orchards, blooming Sicilian almond trees, terraced gardens, and so much more delight our eyes as we travel throughout Italy's 20 regions. Italians take pride in their regions agricultural traditions and anyone can enjoy the benefits!

The Italian peninsula and islands form an agricultural heaven, akin to Eden itself (just maybe stay away from any talking snakes). Its land has been sustaining life for thousands of years with a variety of fruits, nuts, mushrooms, and vegetables. The climate in Italy allows for adequate growing seasons and therefore there are goodies to be harvested all year round.

When we think of Italian goodies, we think of tartufi and porcini mushrooms, the large lemons from the Amalfi coast, the rich and verdant pistacchi, ripe or sundried tomatoes, juicy olives, plump figs, tangy artichokes... the list goes on and on! There is no shortage of delicious delicacies that have nothing to do with carnage.

Italians take pride in their natural agriculture as they should. The benefit for vegans is that they can easily enjoy the plentiful goodies that Italy has to offer without compromising their dietary choices.

Plus, these gifts from nature are super healthy. There's a good chance that this healthy agriculture is part of the reason why Italy has one of the largest shares of people over 80 years old. Long live plants!

Vegetarianism/veganism was exalted by famous Italians

In 2019, I was awarded a Fulbright Grant to teach English in Southern Italy. I wasn't able to choose which town I would be living in. Lucky for me, the Fulbright Program placed me in Paola, Calabria. It's a beautiful seaside town on the west coast with a population of 16,000 Paolani.

As I began to research my town, I quickly found out about San Francesco di Paola, a saint who was born in Paola in 1416. He founded the Order of the Minims and was an avid animal lover. One of the main tenants of the Minims was non-violence. His diet was free from any animal products: he was a vegan!

Fun fact: he lived to be 91 years old! Not bad for someone who was born so long ago... It felt serendipitous that I was placed in Paola where this vegan saint was born and lived. I loved hearing about the miracles he performed, including bringing his favorite lamb, Martinello, back to life after some workers decided to eat him.

The people in Paola were very quick to support my veganism especially since I was able to explain my dietary restrictions in a similar way that San Francesco himself probably would have too: I want to do as little harm as possible to the living creatures around me.

Not many people know about San Francesco, but they certainly know of this other famous non-meat eater: Leonardo da Vinci. There are several documents that allude to the fact that the famous artist/engineer/inventor/scientist abstained from eating meat.

Even some traditional foods fit into a vegan lifestyle

When I lived in Calabria, I had the joy of trying many different traditional foods. This isn't something I can do in various countries because their culinary traditions oftentimes include animal products.

But in Italy, there are so many treats that are just inherently vegan. Such as the deliciously soft fried dough balls called grispelle which are made with flour, salt, water, olive oil and yeast. Or the delightfully crunchy taralli: flour, white wine, salt, and olive oil.

For something sweet, there are the giurgiulena that are comprised of sesame seeds, fig honey, toasted almonds, and citrus zest. These were one of my favorite treats around Christmastime and I was so thankful whenever my friends in Paola offered me some. Another Calabrian sweet that I loved goes by the name of turdilli. These unique cookies are made with flour, fig honey, olive oil, sweet white wine and cinnamon.

Let's not forget about the world-famous limoncello! Made with only lemons, sugar, and alcohol it is a treat that many can enjoy.

Of course you can't go to Italy without eating gelato and sorbetto! Most sorbetto flavors in gelato shops are plant-based and there are even some dairy-free gelato flavors such as cioccolato fondente (dark chocolate). I came across many different gelato shops that also offered traditional flavors made with a variety of plant milks. Bravo!

I had no shortage of delicious specialties to try while still adhering to my plant based lifestyle. It was a pleasure enjoy the local culture via its traditional food. Thankfully that is possible for vegans in Italy!

If you've ever been to a grocery store in Italy, you might be hard pressed to find much international food. For some, that might be a huge problem.

At first, I had a hard time adjusting to living without international food options. But then, I really started to enjoy the fact that the vast majority of the produce and packaged products were grown/made in Italy.

Both times I lived in Italy (2016 and 2019-20) I lived in gorgeous little towns that had fewer than 20,000 inhabitants. I was concerned that there wouldn't be any vegan options at the grocery stores. But I was thankfully very wrong!

Because of Italy's rich agricultural traditions, I had no problems finding plant based staples such as almond milk, vegan yogurt, or tofu. All of which were made in Italy with Italian produce. There were many vegan ice creams and veggie burgers as well!

So not only did I find plenty to purchase at my tiny Conad grocery store, but I also was comforted to know that these products were all made in Italy. That meant my purchases were more environmentally friendly than the international products that are flown in to be sold at American supermarkets.

Most towns in Italy will also have local farmers markets. This means lots of fresh fruits and veggies to be had while supporting local farmers!

There are MANY vegan friendly restaurants in Italy

Over the years, veganism has increased in popularity even in unexpected places such as the very traditional Italy. In cities all over Italy, you will easily find not only vegan options on menus, but full-on vegan restaurants.

So if you're looking for a fabulous country to visit (once we can finally travel safely) while still sticking to your plant-based diet, I highly suggest Italy for your next journey! Don't know where to start? I have some great suggestions for plant based restaurants in Italy in my other article about crave-worthy culinary destinations.

If you enjoyed this article, feel free to read my other written work here on Vocal! I write about life in Italy, cruelty-free skincare, and more. Thanks for reading!