SPAM for the restaurant critic on table 22

by Tanya Hall 8 months ago in satire
Report Story

I’m paid to eat at high-end restaurants. And then I eat SPAM. 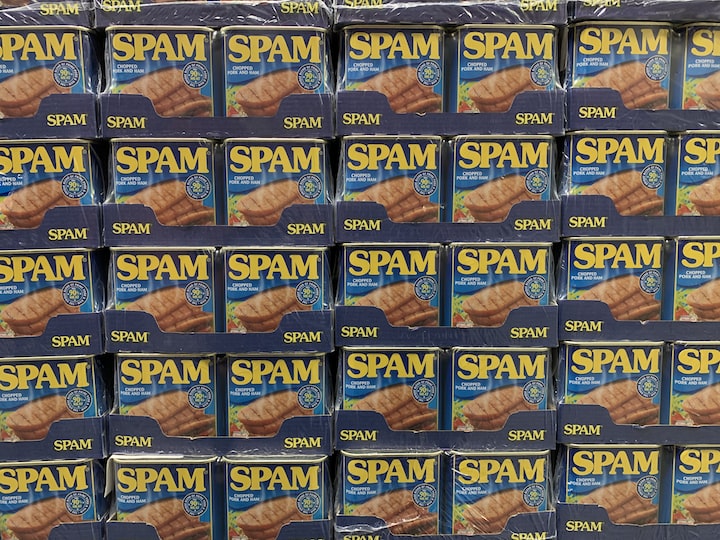 Photo by Hannes Johnson on Unsplash

When a waiter positions a squid ink wafer bedecked with macerated prawns and radish purée in front of me, I can’t help but smile and wonder.

I wonder if they know my secret.

All right, I’m aware they likely haven’t garnered the inner-most workings of my life in the ten minutes of our acquaintance; all they know is how badly I can pronounce schlachtschüssel. As far as personal secrets go, mine isn’t exactly tabloid-worthy either. It’s nothing as juicy as a criminal past or an illicit liaison and has nothing to do with how much time I spend watching The Bold And The Beautiful.

It’s also not so much of a secret that no one else in my personal life knows about this. This is just something I don’t openly confess as part of my somewhat public persona.

Until now. So here goes….

Like I said, this isn’t exactly an apocalyptic reveal. Except for the fact that I review high-end restaurants as part of my living.

As a fine-dining critic, I have wretchedly become accustomed to eating my food off a rustic piece of hand carved wood, nestled among rocks that have been specifically scavenged from the clearest waters of Moreton Bay by a man flicking a voluminous mane like Thor.

Ok perhaps the rock thing has never actually happened, but if a waitress ever feeds me that story I would happily gobble it up alongside my mollusc-infested cracker.

This part of my job requires me to dine out for a living and then try to describe the whole experience without using the word ‘yummy’. I’ve become used to stepping through ornate doors that stretch into immaculate rooms, designed to delight diners into forgetting about last night’s dried-out noodles eaten off a chipped plate on the saggy part of the couch. Restaurants not only satiate our hungry bellies, but also feed our imaginations as customers are transported into a new world where people around you anticipate your needs and all you have to do is arrive hungry.

Or perhaps that’s not such a new world after all; that was basically my childhood.

My mum emigrated to Australia in her late 30s, and always found herself working on the other side of Brisbane’s sprawl, catching a bus, train and another bus to get to work every day. Then she did the same to come home.

Mum worked on a number of different production lines all over the outskirts of Brisbane city; none were ever proximate. She pressed shirts in a dry-cleaning facility, weighed fish portions in a packaging line and packed boxes in a cannery. It is only now as a juggling late-30-year-old myself that I can fully appreciate her aptitude in navigating various forms of public transport, spending all day on her feet, then pulling out a fry pan and plonking a meal on the table after a long day at the conveyor belt.

Mum’s daily routine was executed without a single complaint, apart from the time I’d made my way through two tubs of ice cream in her absence one afternoon. I sense now that her emotional fortitude was thanks to a firm belief that her efforts going towards a better future for the food-loving kid in front of her. A belief my grandma would have held for her.

Mum was time-poor but that’s where the SPAM can came to the fore, bearing its own little key. I still remember helping to make dinner some nights by sticking the thin ribbon of perforated metal into the diminutive hole at the key’s end, before performing the required winding action to reveal the promise of salty protein inside. If you didn’t keep the strip lined up properly as you turned, the silver coil would start to unravel, reducing the user to desperate fits of stabbing the half-opened tin with a blunt knife.

I still feel mum’s callused hands placed gently over mine as she helped correct the over-zealous ways of a ham-hungry kid, unable to understand that a certain level of dexterity was required to birth the meat from the metal casing it had called home for countless years. Mum’s smile would unfailingly flow through her patient guidance in a way that no high school home economics class ever came close to rivalling.

Anticipation of my needs during her long working hours was also a mum-strength; there would often be slices of cold, fried SPAM wrapped in aluminum foil sitting on the bottom shelf of the fridge at the start of each week. Despite knowing their contents, these little space rocks produced wonder and anticipation each time I reached for one. As exciting as pass-the-parcel was at Christina Reyes’ eighth birthday party, the alopecia-suffering My Little Pony at the end of it had nothing on the pink prize of the solo game played at home.

These heart-stirring (and perhaps heart-palpitating) moments often come back to me when I have found myself seated at Maze, Aria or Quay. At the risk of doing myself out of any future editorial jobs, I still revel in cracking open a fresh(ish) tin of SPAM, frying up the contents and savouring my crispy, salty meal with reckless abandon. Heston Blumenthal may never again come knocking at my door but I don’t care.

I quite like SPAM; and maybe you can too.

SPAM in a can

On first glance, SPAM and lavish restaurants wouldn’t usually be spotted strolling hand-in-hand down the sidewalk of epicurean dreams. I’ve yet to be seated at a white linen table and be presented with a plate of barely washed rice garnished with a spiced ham rosette on top, but if that day ever happens you’ll be the first to hear about it.

Despite a glaring lack of tinned meat on five-star menus, there are some noteworthy similarities between SPAM and the diminutive dishes I’ve patiently waited for at many a refined establishment.

SPAM is nothing if not nose-to-tail eating, an ethos that has been steadily making a comeback in restaurants for some time now. In the early days of my being paid to eat rather than the other way around, there used to be a great flourish as the finest cut of venison was set in front of me, alongside the innermost core of an artichoke heart which rendered it to nothing larger than a five-cent-piece. Now however, restaurants take pride in offering offal and presenting these lesser-known animal parts in delicate sauces that compliment rather than mask the heady earthiness of sautéed shaved liver.

Adding spice to a morsel of meat is a trade secret for both the makers of SPAM and a Michelin-starred chef. A smattering of salt and pepper is all that’s initially needed to enhance its flavour and texture. As salt enters meat cells, it modifies the muscle fibre and protein structures, swelling their capacity to hold water and countering the dehydrating effect of adding heat when grilling your Steak Dianne.

SPAM is all over this concept, being both incredibly salty and, to be honest, kind of wet when you open the can. Eating a tin of SPAM is also essentially letting someone else do the cooking for you. While you can heat up your tinned ham in any way you like, you can also eat it straight out of the can with a rusty spoon. It’s like having your very own sous-chef sitting patiently on the third shelf of your pantry.

SPAM is a simple food that comes from humble, practical beginnings. Many people without the sentimental association of this canned dish are quick to turn their nose up at the questionable nutritional content and, let’s face it, questionable colour of this meat in a tin.

But food is far more than its macronutrients and position on the Healthy Eating Pyramid. Food is sensation and emotion. Food holds the key to past memories and unlocks the promise of new prospects. A luscious meal satisfies the soul, as does a dish prepared by someone who loves you unconditionally. I’m not sure how many restaurant chefs have ever felt that way about me, but I have no questions at all where mum is concerned. And neither did she the first time my grandma was able to serve her SPAM.

It’s fair to say I lead a privileged life, and this has nothing to do with the long-pronged forks and laundered napkins in my world. I’m privileged for my canned-food childhood where three-ingredient dinners and mismatched crockery were synonymous with love and someone else’s determination to create opportunities for yet another generation of SPAM-aficionados.

​Any of my restaurant reviews should now be taken with a grain of salt.

I'm also a creative writer who loves a great spiel.

More stories from Tanya Hall and writers in Feast and other communities.