Should Robots Be Cooking Our Food?

by Julie Barnes 3 years ago in fact or fiction / gmo

A scientist comes up with the formula for cooking perfect potatoes and envisions a future without human chefs.

You don't have to be rocket scientist - or a master chef - to cook a potato to perfection. Just follow the scientific formula T=r²/c. Master chefs such as Gordon Ramsay or Mario Battali might not appreciate taking cooking advice from a scientist, but according to Dr. Peter Barhman, people have been cooking potatoes the wrong way for centuries. Barhman, a retired physicist, claims that cooks should follow the formula T =r²/c to properly cook a potato. T is the cooking time, r is the radius of the potato, and c is the constant that depends on the water's heat capacity and the diffusivity of the water and the potato. Though culinary experts might scoff at his academic approach, Barham's theory about how to cook the perfect potato may inject a little science into kitchensaround the world. 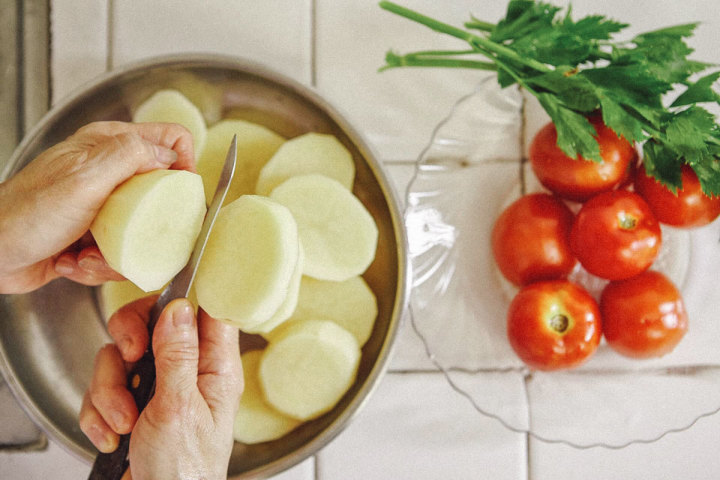 Barham points out that potatoes consist of starch granules, which in turn are made up of two types of large polymer molecules, amylase and amylopectin. When heated above 60 degrees Celsius (140 degrees Fahrenheit), the molecules begin to absorb large amounts of water to form a translucent material. It turns the potato into what scientists call a gel - the cooked potato.

Barham's experiments entailed cooking potatoes for various periods and then slicing them in half. He found that the ring of cooked potato moved gradually to the center, "not linearly with time but with the square root of the time." He claims that his findings show that many cookbooks are mistaken. "They say you should calculate cooking times according to weight, which is completely wrong."

Dr. Barhman has regularly advocated for further integration between cooking and science. "When we cook we generally follow a recipe; we select, quantify and process the ingredients and then serve the food to our friends, family or guests. A good cook (or scientist) will keep records in a notebook of exactly what they do so that they can repeat the experiment (recipe) as required." Potatoes may not be the most complicated or nuanced food but that does not mean they should not be cooked to perfection. Dishes are experiments and the people eating the dish are subjects. Preparing the same meal leads to more refined dishes as the experiment is replicated numerous times. According to Barhman, anyone can become an excellent chef, as long as they follow the scientific method.

In fact, Barhman claims that we might not even need chefs any longer to prepare our food - or even human beings at all. Human chefs may soon be out of jobs if robots become more efficient. Robotic chefs will never make mistakes, lose their tempers, or serve the wrong order. They will follow the scientific method of cooking like an algorithm playing chess - each move is another step in the formula. Robotic cooks will likely replace the majority of cooking jobs while humans only remain employed in higher class establishments that market themselves as, "the last place food is prepared by human hands."

While the convenience of machinery will make the interim period between ordering and being served much shorter, some people believe the art of cooking will be lost. Perhaps machines will actually learn to love cooking, or perhaps they will resent their servitude and turn on human beings by undercooking the clam chowder. Either way, the science of food is the future of food.

Learning to laugh at life while feeding a family of five. Finding unique, unusual recipes on a budget.

See all posts by Julie Barnes →