My Pal Alpha Gal = No Mammal Meat for Me Anymore

by Pam Reeder about a month ago in vegetarian 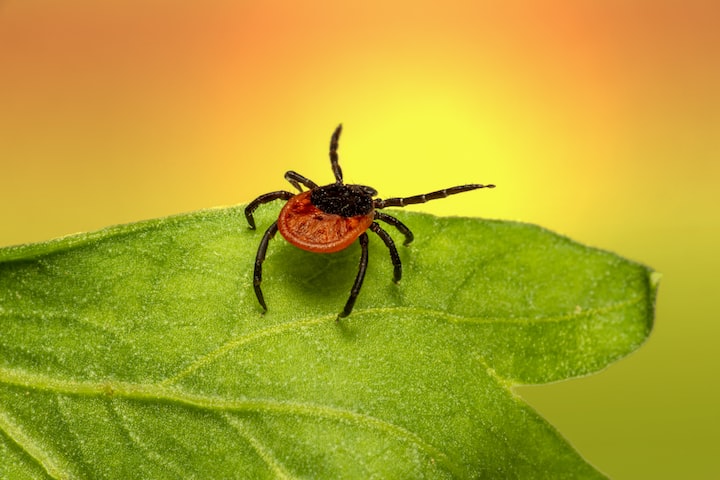 It was an unintentional and undesired union. I still find it hard to believe that something that has plagued me randomly for 50 years finally has a name. That outcome accomplished only after it damned near killed me.

It started in my mid-teens. Suddenly, I would begin a strange tingle that rapidly tuned to redness and intense itching. Scratching the itch led to horrendous welts and scrape marks from my scratch attacks. It was attributed to hormones and stress. Very typical for a young woman my age, they said. Humph. If it was so typical, why did no one else around me have it?

Over time, it was noted that it plagued me especially in the summer. Now it was thought perhaps to be a sun allergy. So, I stayed inside and read.

After I married and left home traveling with my then husband on construction jobs, these hive episodes subsided. Probably because birth control pills leveled out my hormones it was posited. Yes, it was still being attributed to my femaleness. Ugh!

A few years went by and our nomadic wanderings ended. We bought twenty acres in the country, had a double-wide trailer placed on it, bought a couple of horses and began country living. And the hives came back...

Now we began paying attention to what I ate. The crazy thing is, these episodes happened in the middle of the night. I would awaken with intense itching. I tried everything. Soaking in vinegar baths. Adding baking soda to my bath water. Ice packs. Curling up in fetal position with my hands locked between my knees so I couldn't claw myself and crying my way through it.

Because of a few food items along the way, we decided maybe I was allergic to palm oil or coconut. So I avoided both. And for a period of years, there were no episodes, so surely we had found the issue. Not!

The day I could have died.

Six years ago, I drove to my mothers about an hour and a half away. I didn't have breakfast prior to the drive since I planned to eat on arrival. But I did scarf down my favorite road food snack, a beef stick.

Upon arrival at Mom's, I also ate a tiny piece of fried cactus my brother Barry made for me. He is heavily into foraging and the nutritious benefits of plants. So I indulged him. It wasn't good or bad. Just meh.

With my brother Gary (yes, he and Barry are twins), coconut oil I brought, we attempted to create a coffee concoction that was supposed to be a healthy drink. It was also meh.

So with the beefstick, the cactus, and the coconut oil coffee being the only items I had consumed that day, imagine my great shock when the tingling and itching began. Although having not experienced it for nearly six years, it was unmistakable what was happening. I asked my Mom for Benadryl. She had none. I panicked, jumped up and ran out the door to make a race to the little store a mile away.

On the way to the store, I called my husband who was at home a hundred miles away without a vehicle. I caught him up on what was happening with me. I could feel my tongue getting thick, my speech slurring and my breath changing. I started to panic in earnest.

Hurrying, I dashed inside and asked the clerk where the Benadryl was. My face was swollen, I was itching and scratching and my speech was horrible. I was desperate. The clerk was frightened and didn't seem to comprehend. After several pleads and tongue tied demands, she pointed to a shelf. I grabbed a bottle, paid, ripped it open and swallowed four or five of them.

Back on the phone with my husband, I sped back to my mothers. Brother Barry met me at the door. "Shit, Sis! Common, let's get you to the ER. This ain't looking good at all." Gasping for air, I didn't fight him.

At the ER, the nurse ended up chastising me for taking too many Benadryl. In no shape to care, I was just thankful to be in good hands. When the doctor came in, he asked a few questions and inquired about my Benadryl dosage. "Good job. That probably kept you alive. And guess what? I'm going to give you even more because we're out of the medication I wanted to give you. So, you're gonna' sleep for a while most likely." I was a little amused how different his attitude than that of the nurse.

Six hours later I awakened. The hives had subsided, I was breathing freely. I was sluggish but felt great. The doctor came to see me. "I don't have a way to determine what did this to you, but I'm gonna' tell you, this is nothing to play with. You need to see an allergist and get to the bottom of this. You might not be so lucky next time." I took his words to heart.

My pal Alpha-Gal - the gift from the Lone Star Tick

The following Monday, I made an appointment with an allergist. I was told to write down everything I could think of regarding my issue and bring it with me.

The allergist was great. She read my notes, questioned me and listened to me intently. Then she said, "I'm going to ask you something off the wall and please don't get upset with me, okay?"

A rather odd request but I agreed.

"Have you been bitten by a tick recently?"

I was a little startled. Not because she asked about tick bites, but rather because she thought the question would upset me. The answer was a resounding yes! I had been bitten numerous times in the past few weeks by pepper flake sized seed ticks at my daughter's country home. And, in fact, throughout my entire life when living in country settings or indulging in outdoor activities such as camping, hiking or fishing. My long stints of no outdoor activity leading to lack of tick bites would now explain the lulls in my hive episodes.

"The initial discovery was made in 2007 by UVA researcher and Oscar Swineford Professor of Medicine Thomas Platts-Mills, who realized that the alpha-gal carbohydrate was an ingredient in the cancer drug Cetuximab and was causing allergic reactions in patients from certain geographic areas."

She filled me in on the reason for her query. A new cancer drug that launched successfully in the US along the northern portion and both the east and west coasts failed miserably in the southern states. The drug caused reactions just like mine - horrendous itching hives and in extreme cases, anaphylaxis shock. With a hefty investment in the development of this drug, the pharmaceutical company launched a study to get to the bottom of why a certain segment of the population was having such a unique adverse reaction. In looking at other things unique to the area, they determined the culprit to be the deer tick.

Article on The National Center for Biotechnology Information website, which advances science and health by providing access to biomedical and genomic information, The alpha gal story: Lessons learned from connecting the dots

It turns out that with infected ticks, their venom carries a sugar called Alpha-Gal. This same sugar is found in the fat of mammal meat. And as you guessed, this same compound was in the cancer drug. In people sensitized to Alpha-Gal by tick bites, taking the cancer drug or eating mammal meat was like a huge dose of tick venom. Thus, the horrendous reaction.

The most interesting thing about it being a reaction triggered by food, it was not instantaneous like a nut allergy. Instead, it isn't until four to six hours after consuming mammal meat and digestion has occurred and had time to enter the blood stream that the adverse reaction is triggered. This time delay explained my waking up in the wee hours pawing and clawing myself to death.

So, it was never the palm oil my chips were cooked in, or the coconut oil in candy bon bons made by my cousin. It was the steak or burger I ate at my evening meals. The food diary the allergist had me keep while I awaited my appointment for actual testing showed that I had a propensity to eat a lot of chicken, cheese, and fish/seafood dishes as opposed to red meat. This had likely also been a saving grace for me as well as the long intervals between tick bites.

Pile on a side of Cat-Pork sensitivity

Article on WebMD website: Pork-Cat Syndrome an Under-Recognized Allergy - People With Cat Allergies May Also Be Allergic to Pork and Other Meats

In addition to testing positive for Alpha-Gal, I also tested positive for Cat-Pork sensitivity which my doctor said seems to be a common parallel allergy with Alpha-Gal. Like I needed another issue. But this one totally made sense to my situation. My husband does cat rescue and I am surrounded by 20 or more cats at any one time. Though my doctor suggested that we get rid of the cats, I explained that would likely not happen. So, she urged me to have cat free zones in my home and keep some degrees of separation between me and them for my health and safety. Sigh.... Have you ever tried to keep a cat out of anywhere? It's like trying to handle slippery eels. But we have managed.

And just like that, with the dual diagnosis of Alpha-Gal Syndrome and Cat-Pork Sensitivity, my diet was stripped of red meat and pork. No more pot roast or pork roast. No steaks or pork chops. No hamburgers or ham. No venison. No beef chili, sausage, or BACON. The list of can't haves was exploding in my brain.

Woefully, I asked, "What can I have then?"

Fin, Feathers and Everything Else - but no Mammal

My doctor gave the most charismatic smile, "Everything else. You have just embarked on an incredible journey to taste new foods. To reinvent your taste palette. To find new favorites. Don't look at this as a negative thing. Embrace it and have fun with it."

And I have. Turkey bacon is a fair substitute for bacon. Turkey sausage with breakfast is enjoyable. I've explored various veggie burgers and found some more palatable than others. The Impossible Whopper at Burger King is a delightful burger option. I've learned to make chicken as versatile as hamburger once was, and I eat seafood and fish more often. I joyfully discovered that a local diner serves all-you-can-eat catfish on Friday nights.

So, out of necessity my diet now consists of fin and feathers, cheeses, and a plethora of vegetables, grains and legumes.

And I have the Lone Star Tick and my pal Alpha-Gal to thank for setting me on this exciting and more healthy food journey seven years ago.

And I love it with this Tahini Sauce:

If you're wondering just who exactly wrote this piece, you can find more about me here. If you're intrigued to see what else I've written, more stories by me can be found here.

On the off chance you appreciated this piece, a heart would be appreciated. It is inspiration to keep moving forward on this writing journey. There is also a tipping option for those who may want to part ways with their hard earned money and for some odd reason impart it to me.

Other works by me: