Is Eating Tuna worth the consequences?

by Marine Knight about a year ago in cuisine

Or should we continue overexploiting them? 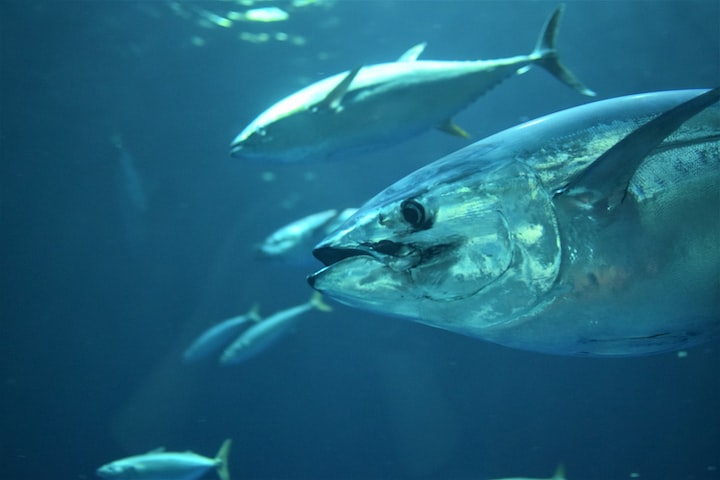 Photo by Kate on Unsplash

Is eating tuna worth it? I say no, but I know others who say different. So here are some of the reasons why I don't eat tuna, and why I think you shouldn't eat tuna either. You can thank me later, or you can cast them aside. Either way, it's up to you.

So here are 6 reasons why I think you should re-considering adding tuna to your shopping trolley the next time you find yourself in the shop.

Tuna comes in all shapes and sizes, Bluefin tuna, which can reach 15 feet in length can weigh more than 1,500 pounds. Even some of the smaller tuna species, such as albacore and Yellowfin (common in canned tuna), can grow to 6.5 feet long and weigh hundreds of pounds. Tuna can swim more than 100 miles a day. With observed speeds of over 40 miles per hour. With such fast fish, the resources used to get what was once a swimming feeling organism, into the final product which is a can of smelly mush, costs a LOT. Trawling equipment and Plastic nets used which when break are discarded into the ocean causing further harm for not just tuna, but many species. Fuel for boats which deplete our non-renewable oil reserves, whilst also contributing to the release of more carbon dioxide into the atmosphere (hello global warming). Seems like a lot of damage to the planet, and inevitably to ourselves in the long run just so we can enjoy a meal today?

2) The Sodium levels in that tin

A single tin of tuna can contain nearly 600mg of sodium. Too much sodium in the human body can have negative consequences on health, such as the increased risk of high blood pressure or hypertension. High levels of sodium also increase the risk of strokes, kidney and heart disease. So maybe curb the tins and use alternatives.

3) The millions of Dolphins killed by Tuna fishing

Since the 1950's it’s been reported that 6 million dolphins have been caught in the efforts to catch tuna. That’s 6 million of those, cute, innocent, friendly mammals we all love that have accidentally been killed! If that doesn't make you sad or angry, what will?

Dr Theresa Burt de Perera, an Oxford University scientist, recently published research showing that fish learn faster than dogs. As well as Calum Brown, a biologist from the University of Edinburgh suggests in areas such as memory, their cognitive powers match or exceed those of 'higher' vertebrates, including non-human primates.

Tuna is critical to human security, without tuna many people who rely on it as a primary source of food would perish. I'm not talking about people like you and I, who are not dependant on it and can simply pick something else out at the shop. I am talking about rural, underdeveloped villages in poorer regions who must catch what they eat. If you have the privilege of internet, and therefore the ability to read this post, you likely don’t depend entirely on tuna as your primary food source to survive.

If people like you and I stopped eating tuna, and thus reducing the demand for tuna to be caught, we would soon see tuna populations ‘bouncing’ back to more sustainable levels and increasing their range and numbers. The expansion of the tuna populations, and subsequently their native ranges, would greatly benefit those who need it most, people that are less fortunate than you and I. Not to mention the fish themselves.

Grown on the British Isles, exploring beyond

See all posts by Marine Knight →