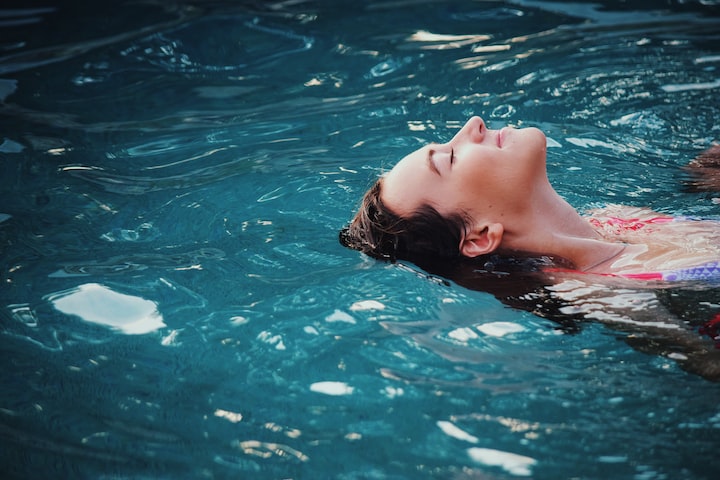 Photo by Haley Phelps on Unsplash

Ah, summer! The stuff of dreams for many of us who were fortunate to have a good childhood. Hopefully, even those who weren’t as lucky still had summer moments that shone for them.

I didn’t go to traditional summer camp, but my summers were largely spent at Willow Lake Park in Woodstock, Ontario. Willow Lake still exists as a campground. It still has the adorable cottages of my youth. But it had a giant, rectangular, cement pool that was spring fed. Basically, the pool was a twenty-five-meter pool squared. There were two diving boards and a raft in the middle. It would be the centerpiece of my youth.

I first started going there with my parents as a child. My twin brothers, who are twelve years older than me, were already established there. I adored them and their friends. I tried to learn to swim and get out of the shallow end, but my progress was slow. I hated my face under water. My brother Leo had some success, but I was still nervous. And then I turned twelve and my parents put me in lessons with one of the lifeguards whose parents were family friends.

The hormones of youth! I sometimes drove up the highway with the instructor and one of his buddies in a two-seater sports car. This meant perching between the two of them. They treated me like a kid sister and were completely appropriate, but my hormones might have had their own mind.

My first swimming lesson, Louie said, “Put your head under water and blow bubbles.” I did. Within a week I was swimming to the end of the pool and back. Pre-teen hormones are powerful motivators.

Once I was confidently swimming, my father would drop me off in the morning before work and pick me up when he was finished work. I brought some lunch but was given money for treats at the snack bar. The crinkle cut fries were a favorite as I’ve written in a previous Vocal Media story. However, the best thing was to order the treat my brother invented and convinced them to sell. Frozen Malted Milk Bars.

They don’t make them anymore, but the closest thing would be a Three Musketeers Bar. It’s a soft bar modeled after a malted milkshake, which are making a comeback. Once frozen it takes a strong bite but the resulting cold and subsequent melting in your mouth was amazing. Perfect for a hot summer day cool-down snack before jumping back in the pool.

Back in the day, they were considered somewhat healthy because malted milk was similar to Ovaltine or Horlicks, which was a healthy drink often enjoyed before bedtime. The bar originated in 1940 and was produced in Canada by Neilson during wartime rationing. When Neilson was bought by Cadbury in the 1990’s it was sadly discontinued.

I’ve tried freezing both the Three Musketeers and Mars Bars, but they don’t have quite the same taste and texture. However, give it a try, maybe it will be your new summer favorite.

Willow Lake remained my summer place, but other interests and responsibilities limited my free time. I still have amazing memories of camping and occasionally renting out my favorite tiny white cottage. The cottage is special to me, and I’d love to go back. The slamming of the screen door still echoes fondly. Tent camping with friends, guitars by the roaring fire, and that first kiss behind the giant pine trees play in my mind like a reel from a movie.

I’d love to go back and try to relive a tiny bit of one of the best decades of my life. The pool has been reduced to a much smaller pool. And obviously, I can’t get a frozen Malted Milk bar. But the little white cottage is still there. There is RV and tent camping available. Maybe I could still get some crinkle-cut French fries, and someone is playing guitar by a roaring fire. Perhaps I can reenact that first kiss!

More stories from Mary Haynes and writers in Feast and other communities.