Baked Beans Are Different from Pork and Beans

by Margaret Minnicks 8 months ago in fact or fiction

Most cooks know baked beans and pork and beans are not the same.

Some people confuse baked beans with pork and beans. However, it is hard to believe anyone can get them mixed up, considering there are some major differences between the two dishes. They both contain navy beans, but there are some major differences between them, mainly because they do not include the same ingredients, and they are not prepared the same way.

When cooks make their own baked beans, they typically include bacon, onions, and bell peppers. As you can see in the above photo, baked beans are darker than pork and beans because of the molasses, maple syrup or brown sugar that might be used in the dish. 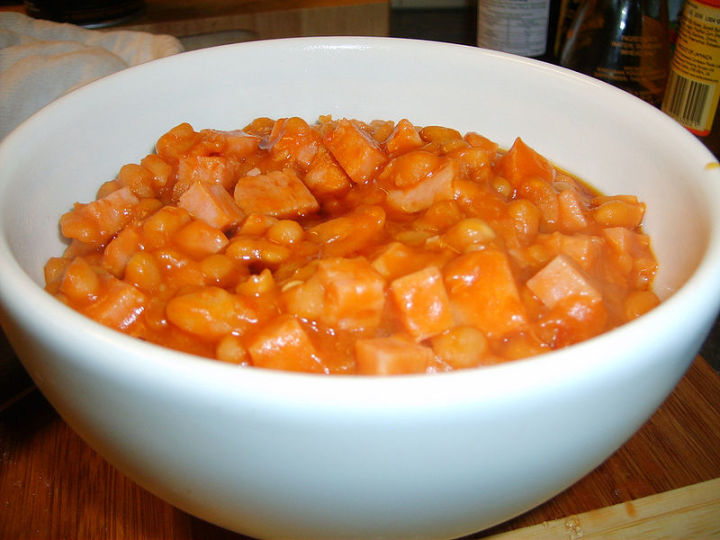 Pork and beans are navy beans stewed with salt pork. They are easy to prepare because the dish includes only navy beans, salt pork, and pepper to taste. You do not need to use salt because the pork will provide enough of it. You don't want your pork and beans to be too salty.

This dish has a thinner broth than baked beans. Despite its name, cans of pork and beans contain very little pork. Sometimes little pieces of hot dogs are included.

You can tell the difference between the two dishes just by looking at them. Pork and beans are lighter in color than baked beans. Baked beans are darker because of the molasses or brown sugar used to prepare them.

The two dishes do not have the same consistency. The brown sugar, maple syrup, or molasses holds the baked beans together. Either one of the three gives the beans a thick and sticky consistency unlike the consistency in pork and beans.

Pork and beans do not taste as sweet as baked beans. Again, it is because of the brown sugar, maple syrup, or molasses in baked beans but not in pork and beans.

Both dishes are convenient because they can be bought in a can. For cookouts and big family outings, most people like to prepare their own baked beans from scratch because they will need a larger supply than what comes in a store bought can. They can add extra ingredients such as bacon, bell peppers, and onions. It takes much longer to prepare baked beans than it does to just open a can of pork and beans.

Cans of pork and beans are not as expensive as cans of baked beans. Pork and beans have come to be known as a poor man's food. You have probably seen cowboys and campers eating pork and beans from a can around a campfire on television. That meal is very convenient because the beans can be heated over the campfire or eaten cold from the can. Just remember to take a can opener.

Both dishes are made with navy beans stewed in a tomato sauce. That's the only similarity they have. Pork and beans are lighter in color, not as sweet, not as thick, and not as expensive. On the other hand, baked beans are darker, sweeter, thicker and more expensive to make or buy in cans.