by Netti 4 months ago in cuisine · updated 3 months ago

The way to my heart is through edible bubblewrap 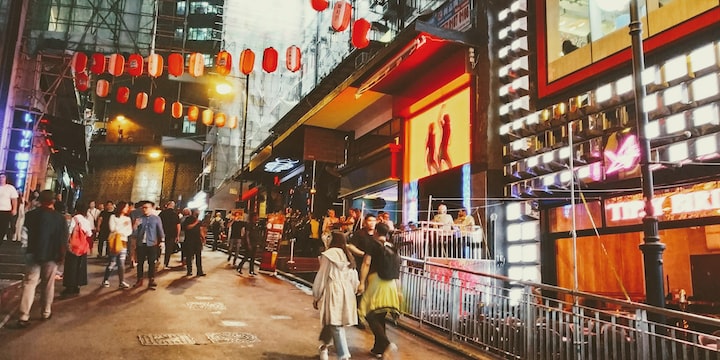 Photo by Viraj Rajankar on Unsplash

The acrid tang of fresh cigarette smoke fills your lungs as you step out of the subway station, mixing with the horrid stench of butchered fish blowing in from the harbor. You cough and slam the bottom of your woolen scarf over your nose in a futile attempt to block it out, hurrying away from the exit, eyes watering as you try not to breathe in the toxic fumes.

The cloud of smoke seems to follow you. Your lungs struggle for air, your head begins to throb from the lack of oxygen. And when you can't take it anymore, you let the scarf fall a scant centimeter so that you can take a quick breath.

But you stop abruptly in your tracks when, instead of bitter smoke and pungent rotting fish, a delightfully sweet smell wafts in your direction. You sniff deeply. It smells like pancakes, the kind that your mom might make first thing on a lazy Sunday morning.

Bewitched, you turn to follow it. In front of you, a man and woman are meandering away from a streetfood stall, sharing something wrapped in a plain paper bag. What is it? You want to know. You drift over to the stall.

The vendor is pouring batter into an odd-looking metal mold. There are little circular indentations arranged in a hexagonal shape. She snaps the lid shut and extra batter oozes out of the sides as the mysterious treat begins to cook. The smell of eggs and vanilla saturates the air. You can't resist; you have to try it. The foodie in you demands it.

You buy one, and seven minutes later, the treat is in your hand. You realize with some surprise that the circular indents from the mold have turned the batter into a funny, bubble-like shape. You stare at it, because it looks like a giant brown bubble wrap, if bubble wraps were a food. You poke it, and the surface is hot and squishy under your finger. You still have no idea what it is, but you are about to find out. You tear off a piece from the top and bite into it.

The mild sweetness of vanilla combined with a hint of milk and custard spreads throughout your mouth. The treat is soft and chewy and cake-like, the outer shell easily giving way to a hollow center, much like a real bubble. It tastes like a waffle, but without the cloying sweetness of maple syrup overwhelming it.

You take another bite, and this time the rich undertone of eggs mingles with your taste buds. It's an addicting combination, and you can't help ripping off a larger piece and stuffing it into your mouth, chewing with gusto. And then another, and another, and another.

A few sad minutes later, you stare mournfully at the empty paper bag in your hand, wishing that you had savored it a little longer.

So the question remains: what is it?

The treat in question is one of Hong Kong's most iconic streetfoods: the egg waffle. In Cantonese, it is called gai daan jai (雞蛋仔), literally meaning 'little chicken egg'. Sometimes known as a bubble waffle, an eggette, or an egg puff, it is a very popular and cheap on-the-go snack in Hong Kong. Although it is typically eaten by itself, it has also been used similarly to a French crepe, where fillings of fruit or ice cream are rolled up inside of the egg waffle to enjoy. There are even modernized variations to the flavor of the egg waffle, such as pandan, matcha, and chocolate. The 'cuteness' factor of desserts involving egg waffles have also turned it into an Instagram-worthy media sensation.

There are a few theories as to how this famous treat came into existence, but one that is widely-accepted is that it was created in the 1950s by an Asian grocery store owner who wanted to make use of broken eggs from his store instead of throwing them away. He tried to make a batter out of it by adding sugar, flour, evaporated milk, and possibly butter, and then he cooked it in a mold. The result was considered the predecessor to the modern version, and quickly became a popular snack amongst the locals.

The rest, as they say, is history.

The few times that I've visited Hong Kong, my family's homeland, I always wanted to eat egg waffles. They were so delicious and so readily available that I couldn't resist begging my parents to buy me some to eat. The crispy outside and chewy inside when I bit through the hollow bubbles made for a unique food experience that I couldn't get enough of. Rain or shine, I'd eat it anytime.

It made me incredibly sad when I had to return to America and could no longer eat them on a daily basis.

(That is also the story of how I gained ten pounds during my four-month study abroad trip there in 2015, even though in America, ironically, I couldn't gain any weight no matter how hard I tried.)

I'm a first-generation American, born and raised bonafide Californian. I use western utensils at home, as well as chopsticks. The only language that I can speak, read, and write fluently is American English.

But my parents and my grandparents, and my aunts and uncles, emigrated to the United States in the 1980s. I may only be fluent in English, but I also grew up speaking and listening to Hong Kong-dialect Cantonese. I grew up watching my grandmother paint careful strokes of ink across magnificent scrolls, and seeing my grandfather pull out a Chinese newspaper to read over breakfast in the mornings. I grew up eating bo luo bao* and chung you beng* and ha cheung*; all sorts of dim sum. Chinese snacks like egg roll cookies and rice crackers and shrimp chips. Even Hong Kong-style desserts like tong yun** and yeh jup gou** and mango pudding with evaporated milk.

For me, food has been the easiest way to reconnect to a culture that I didn't grow up in. I can't read Chinese for my life, especially when Hong Kong uses traditional characters instead of simplified. I can understand more Cantonese than I can speak, but I can't quite grasp the politics behind the Anti-Extradition Law Amendment Bill Movement that took place from 2019-2020. So, food it is. Delicious buns and crispy noodles and savory chicken congee. Salty turnip cakes and burnt claypot rice and pork belly with deep-fried skin. Crunchy wafers and sweet Hello Panda cookies and hot red bean soup for celebrations.

But no ready-made snack can ever beat the warm, chewy deliciousness of a freshly-cooked egg waffle, hot off the griddle, the smell of sweet, eggy goodness drifting up around me as I tear it apart, piece by piece.

Popping bubbles with my teeth, instead of with my feet.

A hobby writer and aspiring novelist with a far too active imagination that she wishes to share.

Receive stories by Netti in your feed
Netti
Read next: The 6 Best Breakfast Pizza in Toronto