A Cup of Tea

What my trip to England taught me about slowing down 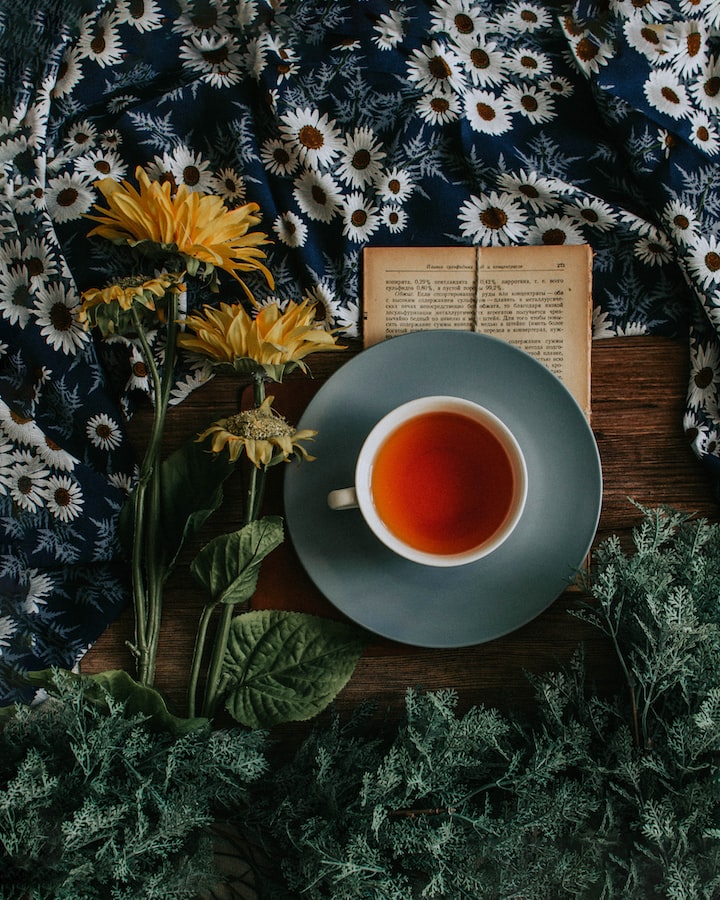 Photo by Loverna Journey on Unsplash

I poured my dad a cup and one for myself. The day was wet and cold, the perfect sort of day for a cup of tea. I took a sip and added more sugar. I paused for a second, experiencing the moment. I was transported back to the trip I had taken to England.

When we arrived at the Heathrow airport, I was tired, but I couldn't have been more excited! It was one of those moments where your fantasy becomes a reality. I remember having to break my first twenty pound note. And it actually wasn't on a cup of tea. I bought a coffee for myself and one for my aunt. (I totally needed the caffeine.)

My aunt had planned everything. Looking back on it now, I realize how crazy we must have seemed to the natives of Britain. My aunt had gotten her international license, and we rented a car, intending to tour England's countryside before spending time in London.

For context, you need to understand that I grew up in a small town in Upstate New York. It's a solid hour drive to get to a mall. Driving to get to civilization has been a normal part of my every day life. My aunt grew up in a similar area but has since lived all over. She was far more used to the city life. But both of us were used to driving long distances.

I did wonder about this, but then I recalled a story my dad had told me about his own study abroad. When he had been in England, his friend's mother had driven my dad and his friend back to the university. It was only a two-hour drive, but on their trip they'd had to stop for tea. Twice.

The common philosophy seemed to be that you don't need to go too far too fast. This mentality helped me relax. England had a coziness about it. A rich history joint with a simplicity in everyday life. I noted the slower pace, different from America's "on the go" mentality. There was a sense of tranquility that washed over me, and I welcomed it with open arms.

I wonder now if my enjoyment of this had something to do with all the personal stressors I had going on at home. I had just finished my first year of college and was about to go into what the nursing community dubbed the hardest years of my education. Then there was my looming black belt test, something that was scheduled for later that summer. Top it all off with me falling in love with a boy who I had an uneasy feeling wasn't a good fit for me, and my grandma's recent diagnosis of terminal cancer. Okay, I guess I was a little stressed at the time.

I first noticed this slower pace when we'd stopped for lunch at a cafe in Bristol before our scheduled walking tour. It was the American equivalent of a Subway. (On a side note, ordering at Subway makes me nervous. You had better tell them exactly what you want and fast. Don't waste their time!) But here, there wasn't a sense of urgency. The girl behind the register took our order, happily explaining the different options. I munched my sub at one of the cafe's cute little tables and felt perfectly relaxed.

The physical form of this slow pace really manifested in one thing: tea. That whole Revolutionary War had driven tea out of the public American life. (I do wonder if this was when the American coffee obsession started.) Add to this America's slogan of "Running on Dunkin." and the idea of "tea time" has all but disappeared.

Perhaps through some miracle or perhaps through British tradition, this pause in the middle of the afternoon still existed. Getting a cup of tea was an experience. At many of the English Heritage sites we visited, you could order a pot of tea. They would bring it out on a tray with a cup, saucer, and spoon. Often there would also be a little pitcher of milk. I'm more of a strictly sugar person when it comes to tea, so I often didn't take advantage of this. The setup alone eased me to a place of contentment. It forced me to slow down. Forced me to pour the tea into my cup and add my sugar. It was a stark contrast to a Starbucks or Dunkin to-go cup.

I remember sitting at what I would describe as the American equivalent of a food court. It was the sort of place where one might grab a chicken sandwich or a burger before touring a museum or other historical site. But here was different. As I sat, sipping my tea, I realized the calmness of the atmosphere. There was no sense of "hurry up and get going!" There were families and friends sitting down for an afternoon snack and tea. It was a chance to breathe and regroup, to plan what to do next. I couldn't help but wonder how this concept could benefit people back home. It could certainly help me on a personal level.

I realize that the concept of slowing down and not always being in a rush is not exclusively British in any way. But for me, it took a trip to England. It took teatime. It took a few kind cafe workers. It took several cups of tea. To remind me.

To remind me that not everything is about getting to the next activity. Not everything is about finishing first or how fast you can get it done. Sometimes you need to pause. Experience the moment with all the emotions that come with it, good or bad. Slow down. Make a pot of tea. And savor every sip.

More stories from Jessica Norris and writers in Feast and other communities.