I talk on racism and more 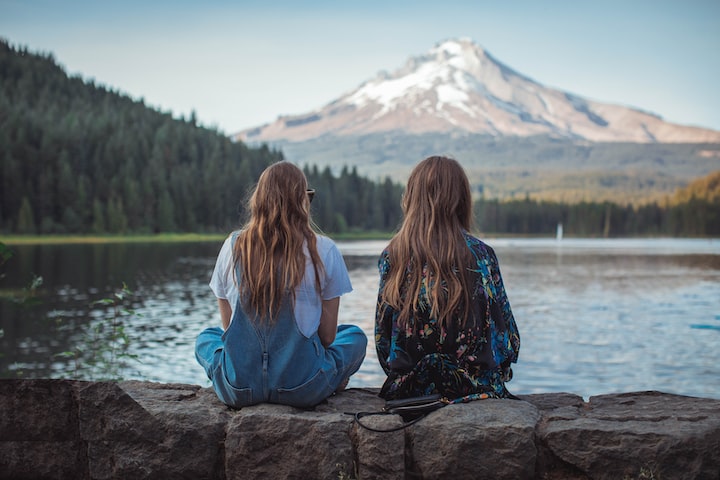 "If we wish to achieve an effect, we must first investigate the nature of the forces in question and ascertain their proper place."

Hexagram 64. Before Completion in The I Ching or the Book Of Changes

It started with a conversation at lunch when my kid sister and I were visiting our parents.

Just us and them, at home, where we grew up, having lunch on a weekday, just like old times, in the middle of nowhere in the countryside of Portugal.

My kid sister proudly commented on how a black football player stood up for himself and acted when certain people started insultingly calling him a monkey! She works at a football tv channel, and unfortunately, she has already seen terrible racist and sexist moments at her job.

At our lunch table, my father was, unfortunately, acting as part of our society.

But when no one specifically called him a racist, why was he taking a side before questioning things first?

In his voice, we could notice that terrible tone of nonsense in his irritation.

You say that you are not racist, but just last week you said you don't like the Chinese.

My father looked at me as if I had just said the most insulting thing about himself, something that would define himself totally to just one thing - Racist!

Fire in all his expressions! And probably in his mind, he was thinking, "How dare you. How dare you, you stupid girl, isn't it enough that you like women, and I'm accepting it, how dare you now, putting even more wood into my fire of precious prejudices, all of them so well nurtured through time, they are mine." And nearly screaming, he said:

I didn't say that; I said that I didn't like their food.

Said my sister, adding more wood into that burning look.

Meanwhile, what was my mother doing?

She was comfortably seated, amused by our talk, but far from it, just probably thinking about the dessert and happy to have their kids at home again; everything else was too far from her reality.

My father was for sure happy, too, as he always had particular pleasure in making terrible affirmations just to ignite a discussion.

And while sometimes he acts as a terrible human being to his daughters and wife, he can be mistaken as a true gentleman by strangers or friends.

My father was now using all kinds of silly affirmations to make his point, and suddenly he says

(I know, it is deplorable and shameful)

Suddenly, when we were nearly giving up on the discussion just so that my father would feel better and could calm down from this terrible alien brought by right-wing speeches rising here and there, just like weeds, I had an aha Moment!

I remembered a video published on youtube by the Presidency of Portugal featuring António Damásio.

It's a program called Scientists at the Presidency.

In that video, Damásio explains the power of fake news in social media and our human ability to believe. Science tells us that you always tend to believe in things that you find comfortable, that somehow you find more accessible and acceptable than specific facts.

He talks about an experiment at his Brain and Creativity Institute, where his team showed some science-based facts to people with certain wrong beliefs.

Damásio told the teens that most people would ignore the science-based facts that prove their beliefs are wrong and naturally increase their faith in their views. (Is this evident for everyone? because I was saying this to my partner, and she wasn't surprised at all)

So, when this enlightened my mind, I quickly changed my approach to a more kind and lovable one and started to call my father - daddy (which I usually don't do).

After this, my sister and I sounded just like an orchestra! And as one of us was acting like a bad cop, the other was quicker acting as the good cop.

I could calmly say to my father:

- you are Right! But the thing is that to you, being called white isn't offensive at all!

Instead, if I call you dumb, ignorant, or something that touches your insecurities and the prejudices you have against yourself, you might change your ideas.

As he was calmer and was suddenly listening, I went on:

Look, we can all be racists even if we don't know it; we are never free of committing a wrong judgment because we all have prejudices. So it might be easier if we think that we are all racists, xenophobic, and so on, and by doing that, not judging anything or anyone.

My father was thinking; I could see that now some clear waters were taking care of that tribal mode he was in!

It's also easy to make an assumption based on stereotypes.

My sister and I will probably need to keep up our job on destroying my father's wrong beliefs for the rest of our lives, but we aren't also totally free from committing bad judgments.

"Of course, it is important to know that our brains are still equipped with the biological machinery that makes us react in an ancient, ineffective, and unacceptable way."

Says Damásio in Searching for Spinoza.

And imagine that, a man like Spinoza, that could shake the beliefs about God and politics in his time, he was so damn upfront in so many things, and at the end, he was still prejudiced against women, as if we aren't humans! Also, he thought that animals existed only for human needs! I read about this in the very well-written Miracle Spinoza by Frederic Lenoir!

Isn't it more acceptable to start by acknowledging that our brains have a natural tendency to act primal?

And how can we stop acting primal?

But how can we start practicing that rational thought if there is no space?

Space in our minds and bodies, room to live in different places and have different experiences, space to love and be loved to free ourselves from all types of prejudice.

How can we find that space?

After that lunch, we ended up doing something unique and new, I don't know if our discussion inspired it, but for sure, this was the cherry on top.

My father grabbed a book that my mother had bought some days before. He started reading it out loud for me when my sister and mother were somewhere in another room.

He suddenly smiled and laughed (in his expression, some commotion was taking place); he was reading about hasty judgments based on stereotypes and conventions.

My sister and mother came back to the living room, and we decided to sit outside on our front porch.

We were now spontaneously holding space for my father to read aloud a chapter or two of that book.

While my sister and I were seated on the floor, we actively listened to what he was reading, arguing here and there. It looked like a dream come true!

We were doing something incredibly new, something that had never happened before. I could sense all my family glowing from that pleasurable moment! We were holding space for our minds to evolve as individuals and also as a family!

I'm still amazed every time I think about that moment!

My father was raised to be a farmer, just like his parents. He is naturally strong and very coordinated when it comes to farm labor, but out of that, he has no flexibility, he can't relax an arm or a leg, can't follow a motion, and doesn't yet know how to breathe consciously. Tension builds upon him from an early age.

When there's tension, all the muscles, tissues, organs, and bones of the body are fighting for space. The sympathetic nervous system, which coordinates the fight-or-flight response, is charged, and the person might feel that he is constantly at risk, that something is wrong. Feelings of rage, depression, disappointment, hate, pain, abandonment take over the person.

"Awareness is the highest stage in man's development (…)

The improvement of awareness is preferable to any attempt to overcome instinctive drives. For the more nearly complete a man's awareness becomes, the more he will be able to satisfy his passions without infringing on the supremacy of awareness."

Awareness through Movement By Moshe Feldenkrais

I'm now confident that love is not just an essential feeling; it is also an essential space for the highest stage in man's development - Awareness!

When a man feels love, his body relaxes; through that relaxation, his mind can shut down that tribal mode; he no longer acts as part of the group, he is now thinking by himself, he's conscious.

Even though my analysis has so many flaws, at least somehow, it helps me understand all the terrible things happening lately.

The situation in Afghanistan, Haiti, Mozambique, Lebanon, Hong-Kong…while on youtube, Richard Branson invites us all to travel with him to space!

As a reader I love to learn something meaningful, I love to feel inspired and motivated, that’s also how I try to write.

More stories from Aurora and writers in Families and other communities.