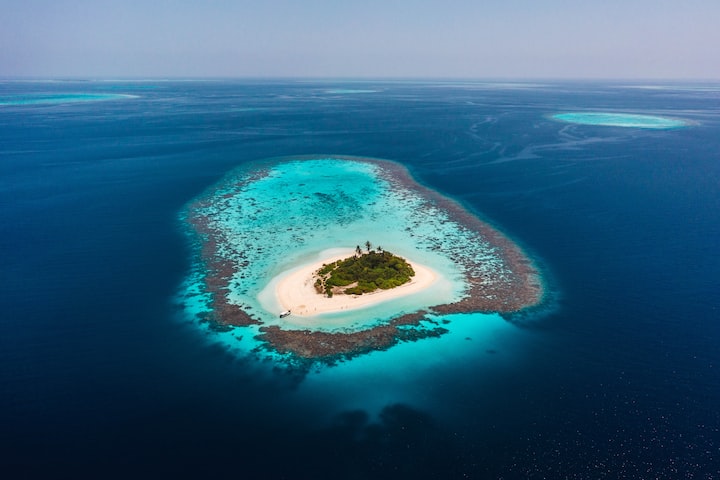 The water here appears vast - the image is crisp. The water blue and clear - still in that moment.

In comparison, the land seems small - it is resting. The land might be comforted by this water - or the land might be stifled by this water. This water could be intrusive, and perhaps even destructive. We wouldn't know what the land thinks, land doesn't really talk - does it? It won't be discussing with the water, how over time, they have been eroding their edges - bit by bit. Taking away the only thing the land ever knew of itself. Little bits and pieces being swallowed up by the water. The land has no say - is the land a victim?

Do we blame the land for being frustrated?

Thing is, what if it's possible that the water doesn't know? Water is just... being the embodied being it is. It's just there... it's perhaps on occasion potentially overwhelming, swelling from other parts unknown - creating an eruption, an interruption to the land's very existence. Do we blame the land for being frustrated? Do we blame the water for being, well, water?

Then again...the land and the water may have an agreement. Maybe the land accepts the water as the water is - just, a lot. And maybe the water does it's best to quell itself for the status quo - so they can exist harmoniously for the times when there are people around. Perhaps they have come to the understanding that they are in each others' life's for the long haul. They can either accept that they can work together to keep the peace - because there are so many other external factors in the world that can do damage. Maybe they made the agreement to protect each other because, really, they have only ever known each to be as they are. It's not an excuse, it's just reality. There are so many other harsh realities that it seems better to appreciate one another - instead of tearing each other down.

I am sending out an s.o.s....waving the white flag if you will

Initially, while I walked away to avoid a confrontation - I never wanted what happened, to happen. It has been almost a year. I know for myself, I regret saying the things the way I had. There is not much to be said about that, for someone who usually has a lot of things to say. I don't. I'm not going to go back and try to explain or even excuse what was said from what was understood. What I can say is that I was (and have been) beyond hurt about the whole situation, aside from the fact I had poorly expressed myself, it hurt tremendously that you felt so strongly and believed that I have that much distain in my heart for you or your family.

I am sending out an s.o.s. - waving the white flag, if you will.

I am sorry, that I can and will say, and also, I have learned that I am not the best with words. Not verbally, and not even written. Essentially, I've come to realize that I am actually not that great at expressing how I feel. I'm trying to be better - that's a lesson I have had to learn the hard way. That's all I can really all I can say about that.

There's not a day that I don't think about you guys, there are things I come across I want to express and I can't. I feel it's not welcomed - which I understand.

I am asking for forgiveness? Or an understanding of sorts, I am not asking for your friendship, I dont know what I'm asking for - just know I am very sorry. That's it. That's all I got.

More stories from Barb Tierno and writers in Families and other communities.