One Time At Band Practice 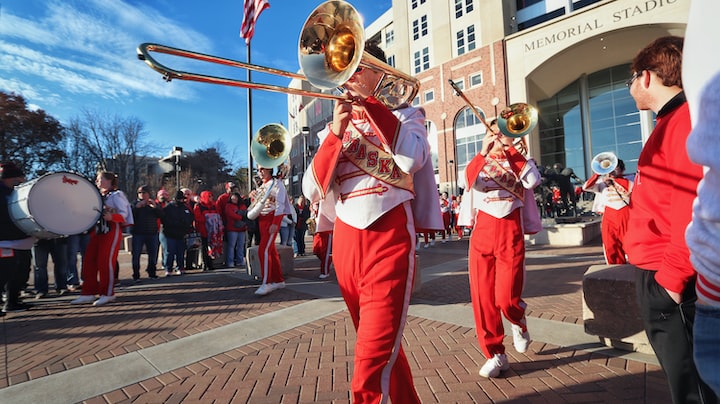 Photo by Jakob Rosen on Unsplash

Lucas Rogers was a rare breed for the small high school I grew up in. Many girls had crushes on him, and I was no exception. He was a band geek, but one of the few tan and handsome men at our school. He always wore nice, preppy clothes, and a tight beach themed necklace followed by a cross around his neck. He could make a joke out of anything and was never less than lively. He was friendly to everyone, no exceptions.

He was also the low brass section lead, and I was happy I chose the trombone as my instrument. All those long days of carting it to and from the activity bus, classrooms, and home finally seemed worth it. He was flirty, outgoing, and fun. Shockingly, he even paid attention to little ol' awkward me. When we both wound up with ear infections on opposite ears, I remember the rest of the brass section joking that we must have been standing too close to one another. I know, gross. Embarrassing even. Yet, somehow I thought it was funny. After all, I was a girl who looked like a twelve-year-old boy at the time, even more so in a band uniform. His attention was totally unexpected and super exciting for someone like me to have. It made me feel special.

When club sign-ups came around, he asked me directly to join Raze. If you don't know what Raze is, it is an organization that "tears down tobacco lies" in West Virginia. Lucas was the president of the Raze club at our high school. Knowing my answer before I said it, he gave me the sign-up sheet, a smile, and a wink. To this day, I have never filled out an application so fast. At the first meeting, we all signed a petition for a "tobacco free" promise week. I never smoked or rubbed chewing tobacco, so I had no issue signing the petition. Overall, the club's mission and goals were lackluster, but that extra thirty minutes of watching Lucas at the front of the classroom made it worth it. I was completely smitten.

After school let out that day, we walked to band practice at the field. We were in our field show order as we walked down the stairs, across the bridge, and to the football field to practice our performance. I know, you're expecting me to fall down the stairs or bleachers in front of my crush like the sousaphone player at the halftime show, but that isn't the case. As we descend the steps, I say "Someone is smoking." Lucas turns around and looks up at me. Without thinking, I laugh and say "I know you're smoking hot, but that's not what I..." While I was talking, I suddenly saw the cigarette burning in his right hand, puffs of smoke sending strands into the air. His left hand was over his mouth in a "shh" motion. He smiled and erupted into laughter after hearing my comment.

My jaw dropped after realizing that he was literally smoking. I was embarrassed about my comment, but even more shocked. "But, Lucas...aren't you the president of Raze club? Didn't we just sign the tobacco petition today?" I found myself asking, even more embarrassed about my naivety. He followed up with another, "shh" signal, wink, and the statement, "Let's just keep this our little secret. It's between us okay?" His words found me swooning with agreement once again. That day didn't shatter my image of Lucas even though he was proposing one thing, and doing another. I tucked his secret away like it was a badge of honor, frame and all inside my heart. I had a piece of Lucas most people didn't know about, and it was my new treasure.

I never told anyone about what happened while we were in school together; not his smoking habit, and not my embarrassing attempt at flirting with him. Honestly, I was mortified. Talk about making such an obvious confession to your crush. Though admittedly, I didn't mind inflating his ego just a bit more. He wore it well. I'm just glad it was a guy like Lucas I made a fool of myself in front of in high school. He didn't get insulted, didn't insult me, and only tucked it away with a smile as a funny, genuine compliment. Even though I was embarrassed, I can't say I regret it. After all, loudmouthed, honest, and direct confessions are what I've always been all about. Now at parties I always have a funny and entertaining first crush story to tell. I can look back on those memories, smile, let out a good laugh, and entertain others even when life gets hard.