I Gained 50lbs From Binge Eating During My Custody Battle

by Missy 2 months ago in Bad habits

Thoughts on recovering from emotional eating 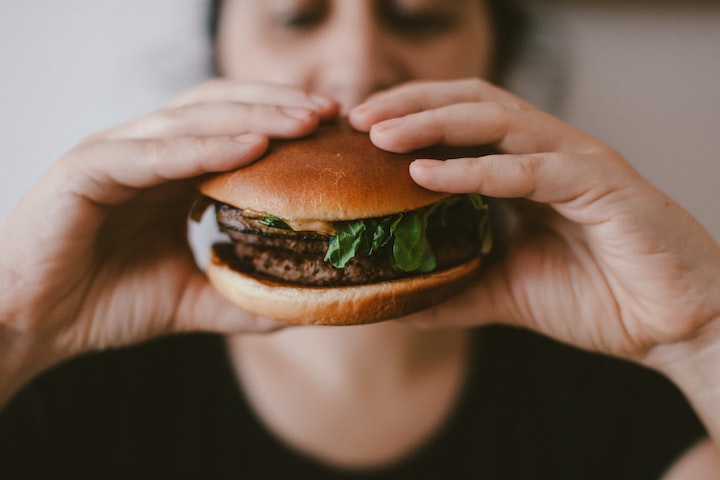 “I need a lawyer,” I wailed, cramming handfuls of chips in my mouth.

“What happened!? We’ll figure this out,” my friend reassured me.

I explained the situation, and she agreed that a lawyer was not optional at this point. “I don’t know how I’m going to afford this,” I vented, scooping a mound of butter pecan ice cream onto my spoon. I muted myself so she couldn’t hear me eating and let the smooth, rich ice cream melt on my tongue.

I swallowed quickly and unmuted myself. “Sorry about that. I didn’t want to chew in your ear.”

This is basically how my phone calls over the next three years went as emotional eating became my preferred coping mechanism. Therapy and meds can only do so much when you’re at your breaking point.

Some people handle stress well. Stressful situations are just minor inconveniences for them, not catastrophic events. They meditate, exercise, and practice tons of self-care sessions when life gets crazy. Honestly, I don’t know many of these people, though I admire the ones I’ve met.

The rest of us let our vices carry us through tough times. We stay up too late and gamble our money away. Random flings numb the pain, making us feel less alone as our life crumbles around us. We smoke, drink, or eat more than we should.

I’m not much for casinos or one-night stands, and smoking and drinking don’t really interest me. Food, though — food is always there for me when life gets rough. I can count on carb-filled binges to block out my sadness or anxiety, at least until the shame sets in for my lack of self-control. Unfortunately, food creates as many problems as it solves.

I like ice cream, but I don’t love it. Candy bars aren’t really my thing, and cookies aren’t my first choice either. My weakness is the salty, crunchy deliciousness known as Lay’s sea salt potato chips. I would eat an entire family-size bag in one sitting when I was stressed, sometimes twice in one day.

I ate chips with breakfast, lunch, and dinner. In fact, sometimes potato chips were all I ate in a 24-hour period. When I couldn’t sleep, I shoved Lays in my mouth at midnight, mindlessly eating as I watched Netflix and the Lifetime Movie Network.

Chips got me through my custody battle, but they also made my weight skyrocket to an all-time high. My mind was preoccupied with depositions and evidence gathering, so I didn’t notice until I tried squeezing into my court attire one morning. I couldn’t get the pants over my thighs. Frantically, I called a nearby friend and asked if I could borrow a suit.

I no longer owned a scale, so after court, I headed to Walmart to use the free one by the pharmacy. I hadn’t weighed myself in months, so I was shocked when I saw the scale in the mid 230s. My Lays obsession had gone too far. It was time to stop buying potato chips.

I always swore I’d never hit 200 lbs, yet here I was pushing 235. During my last pregnancy, my weight crept up to 199.9 lbs and I panicked. But that was the day of my delivery, and the scale never went any higher. Well, at least not until my binge eating peaked.

I’m not sure why I chose 200 as the magical number to avoid since I was already overweight anyway. I guess I needed to feel like I was still somewhat in control of my health. It’s like going to the bar even though you have liver disease and promising yourself you’ll only have one drink before heading home.

I reached out to my mental health provider for help and explained that I couldn’t stop eating potato chips. When I wasn’t eating chips, I was thinking about how I wanted to buy them. I forced myself to quit purchasing them, but that still didn’t solve the problem. Out of desperation, I fried up potatoes at home to make my own salty snacks.

“I’ve dealt with addiction before,” I explained to my provider, “and it truly feels like I’m addicted. But how can you get addicted to potato chips?!”

I was ashamed. People were out there struggling with bigger issues like substance abuse and alcoholism, and here I was crying over potato chips. I blamed my Lays addiction on a lack of self-control and hated myself.

I shouldn’t have been so hard on myself. Research reveals that food can be just as addictive as drugs and alcohol for some people. Additionally, some mental health conditions can trigger food addiction and binge eating. For example, someone with bipolar disorder may eat excessive amounts of junk food. In fact, nearly 1 out of 10 people with bipolar disorder are binge eaters.

30% of people with binge eating disorder have an ADHD diagnosis; we crave dopamine, and binge eating releases the rush we were craving. It’s not just an impulsive thing, though; our brains are actually wired to view food differently than people without ADHD.

Simply put, our brain’s reward system sees food and gets overly excited. We hate disappointing anyone, especially our own brain, so we indulge.

That’s why we can’t just have one chip.

Very few people knew about my binge eating, but the ones who did often suggested consuming chips in moderation. They told me to just eat them on Sundays — as many as I wanted — or have some daily, but only a few at a time. Yeah, none of those ideas worked. I had to completely eliminate chips from my home, and for a while, I couldn’t even buy russet potatoes.

I was embarrassed and disgusted with myself, so I decided it was time to work on the issue again with my mental health provider. She encouraged me to look at binge eating in a different way than I had previously done. Instead of viewing my food addiction as a shameful secret, she wanted me to consider it a blessing. It sounded crazy at first, but as we talked through things, I realized she was right.

“Instead of hating yourself for binge eating all these chips, be thankful they got you through a stressful time in your life. Chips were a coping tool for you, and they helped you survive bad times. They were what you needed then, but you don’t need them anymore. They have served their purpose.”

Sobbing, I replied, “But I’m going to miss them so much. I feel like chips are part of me. They’ve always been there for me. I feel so stupid getting upset like this, but they really played a special role in my life.”

“I know,” she responded, “and it’s not stupid to feel that way. It’s okay to be sad about giving up something that got you through some hard times.”

After our appointment, I threw away my last bag of chips. I was done. I could have chips at parties or other special events, but I’d never buy them for my home again. If the kids wanted chips, I’d purposely choose flavors I didn’t like or brands with ingredients my body couldn’t have.

That was months ago, and for the most part, I’ve honored this promise. I did cave and buy a bag of Lays twice, but that was it. They didn’t taste as good as I remembered, which made me sad, but I was also grateful my tastebuds were changing.

I don’t miss chips much anymore, though I still think about their satisfying crunch a few times a week. My binge eating habits left me with a slew of health problems, so I’m busy tackling them one by one. I’ve lost approximately 45 lbs this year, and jicama sticks with hummus are my new go-to snack. I’m able to buy potatoes again, and I bake them instead of transforming them into homemade potato chips.

But I’m not in the clear just yet. Binge eating is still a problem for me occasionally, even now that I’ve ditched the chips. However, I’ve gotten better at resisting temptation. I need food to live, not to cope with stress or heal my trauma. I remind myself of this daily, and I’m starting to believe it.

Missy is a single mom who is too tired to come up with a clever bio at the moment. She has been a writer for more than 10 years and spends the bulk of her time on Medium.

Read next: The Guilty