How To Become a Soccer Referee

by Johnson Bernard 2 years ago in how to

It's not going to be an easy road, but I'm sure if you're dedicated you'll have some fun on the quest of experiencing how to become a soccer referee.

It's actually a unique career path to accept, and I implore those who are serious to continue (as well as to never give up). You'll obviously be reciting a great many rules and regulations to yourself for some time, but don't forget this key tip: study plays as much as you can. Those before you didn't have YouTube or Twitter to watch some of the most legendary plays over and over again. These can help you in unlocking some of the more difficult concepts in how to become a soccer referee, like memorizing all of the certain calls, penalties, how to set up penalties, where to start the game, and so on.

Also, and this a tad more superficial but still necessary, you should also be aware of the biggest soccer scandals of all time, because some of these dealt directly with the referees. Don't ever accept bribes of any kind, don't ever lower yourself to the level of unprofessionalism that other officials have before. Other than that, I suggest you make it as fun and worthwhile as you can, because if not you'll only be reducing the level of excitement refereeing can bring to the truest fans of the sport. And, at the end of the day, this is all that should matter to you: outright, professional soccer and nothing less (with all the rules attached, of course).

The "essential insider's insight," so they say, of refereeing in the professional sport of soccer, but I can't downplay it. This captivating look within football officiating is a breathtaking feat, explaining everything down to how to become a soccer referee, to how to maintain that level of professionalism through years and years of dedication.

It takes a lot to referee, and most people tend to forget this. If you're yearning to learn or become a soccer referee, I suggest this amazing inside guide that not only gives some of the most engaging advice, but is always serviceable with end to end explanations at every level in refereeing.

Not in the form of journalistic articles or in newspapers, but refereeing calls for one to report on the game after it's already been played. There's the US Soccer Referee Report you have to be weary about, and there's also the US Soccer Supplement Referee Report.

While the ladder may be used in cases of misconduct, like dismissal of team officials, serious injuries, or referee assault, the former is more of a play by play action of the invent in question and should be well-known for those dedicated to learning how to become a soccer referee. Who knows, maybe you'll even be the one to write about some of history's worst soccer riots, but hopefully you're not involved in any future events like those of the past.

This goes hand in hand with what football hooliganism is and how to stop it. Don't expect to head into refereeing without knowing what's safe and what's not. As a ref, you're also required to know some form of medical education just for safety, and of course the guiding regulations behind these procedures.

As for your own literal cleanliness, some recommendations are skin care with SPF protection, caps (as long as they're safe and don't endanger the players or other officials), and long sleeves are ideal, just ensure it's appropriate and goes along with the official uniform...

At entry level it may not matter as much, but the laws of the game state there is a regulation piece of attire and an Official Sports International is US Soccer's partner. As a referee, you should also be accustomed to wearing longer-sleeved shirts, just as a precaution, and as a way to stay warm.

Under this regulation in US Soccer, those learning how to become a soccer referee need to be aware that only the Official Sports International logo is acceptable, and the accompanying badges or emblems on your uniform must also be regulation. If otherwise, you're liable to be kicked from a game (and you don't want that).

Much like how you'd picture the American system of government, soccer refereeing has a similar structure, except there's three individuals: a referee and two assistants who assist off the field. When learning how to become a soccer referee, accepting your own place between these two types of refereeing is key, because you don't want to get stuck being an assistant forever (if, of course, that's what you want to do).

As is the case, Laws of the Game state the necessity of the diagonal system of control as sanctioned by member organizations of the US Soccer Federation. The Federation also requires the need for at least one linesperson, but two is obviously preferred. Two assistant referees are always required, though.

In how to become a soccer referee, you should also be prepared to know what is and is not prohibited beyond the obvious drugs and weapons. In this case, vanishing spray is a good example, for it can be requested of but is more often prohibited for use in competition. 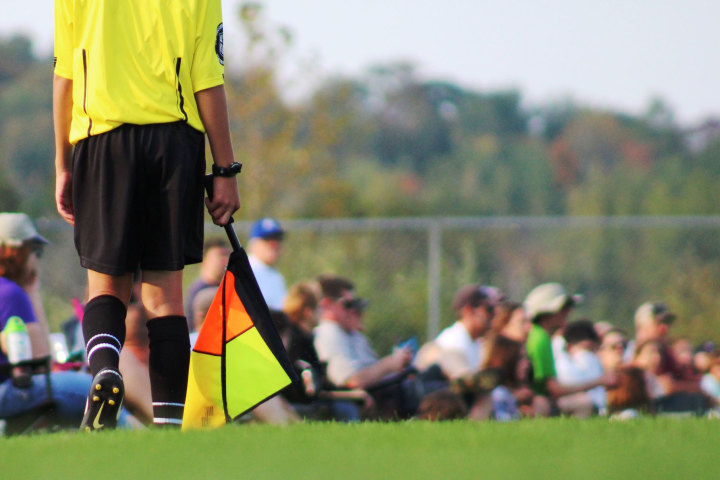 There's actually a wide variety of ways and routes one can engage in yearning how to become a soccer referee. One of the simplest and most stress-free possibilities is referee training, which entails the necessity of passing the NFHS. More often than not this happens at a young age, as certification requires the passing and completion of written rules exams.

Schools more often than not require certification under the USSF soccer rules, so do make sure you know these, as well. You can find both the NFHS and USSF rules here, to make preparations that much simpler for you. There's also a little thing called...

There's actually a vast and complicated referee grading system that is exceptionally important for all to know, even those who aren't studying how to become a soccer referee. For those who are, though, there's a total of 15 grades, each with their own field training, connotations, and so on.

Referee grades can be viewed as tiers almost, the first being a FIFA referee, the second being an assistant, then national, then assistant national. As the list moves closer to 14, the less larger of a role that referee has in connotation with the sport. At 15, there's the Emeritus State Referee, at 8 there's a cross between Competitive Youth Referee, one being indoor and the other being based on a beach.

The US Soccer has already amassed a widely diverse and huge popularity among citizens in becoming referees, so you're aren't alone. If you're struggling with how to become a soccer referee, there's also online courses that employed nearly 140,000 officials, if training is too burdensome.

These are online courses that can be of utmost importance to those just beginning to study. Some players and even coaches utilize this online training so as to learn how to better situate their players, in addition to their plays as a whole.

Last but not least, then learning how to become a soccer referee, the avoidance of a conflict of interest is necessary in feigning a continuance in the field. These are heavily reprimanded and are highly lethal to soccer ref's career, because they can be easily avoided and tend to be of high stakes, or literal interest to the entire FIFA industry.

Remember, referees are intended to be the only high officials on the field who are not just capable of seeing the plays as clear as ever, but calling them as how they see it (without bias, that is). For this, restricted by the US Soccer Federation Policy 531-1, active officials can serve on various committees and boards, or the State Association, but must comply by the rules. Knowing the rules means knowing the degrees of what you can and can't do on the pitch, as well as when you're off it.

Father of four, married for twenty years, and yet I still have the energy to type this up at 1 am as little Timmy begins to wail from upstairs. I'm a fixer-upper and a family man.

See all posts by Johnson Bernard →