by Jaci Schreckengost about a year ago in humanity
Report Story

An essay of the lights I found on a 2019 trip to Seattle. 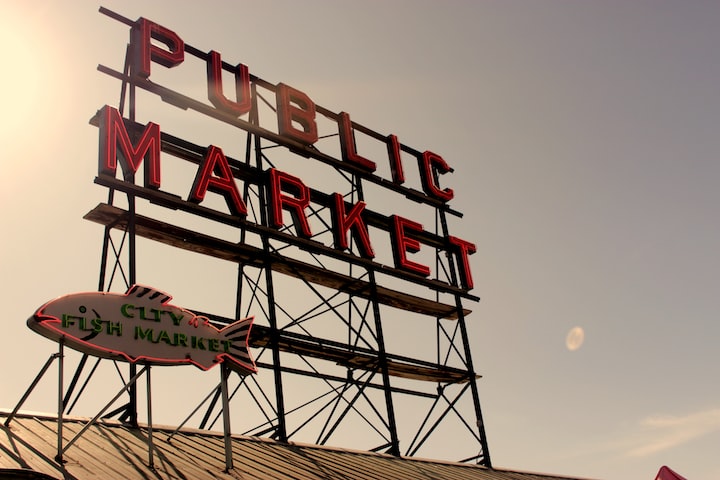 Photo by Sarah Brink on Unsplash

I rolled out of bed in my Seattle hotel room around six that Tuesday morning in May.

I got dressed and walked out the hotel doors. Took a left through the courtyard, then a right onto the street. I looked ahead of me to see the red lights from the Pike Place Market sign cutting a break in the grey clouds of the day.

After breakfast that morning, I found myself in a window seat at Street Bean Coffee Roasters. If you’ve never heard of them, like I hadn’t until that day, click here. Basically, they believe in humanity and engagement. And if you have the chance to actually go, get a vanilla latte (I don’t know what they do, but it’s better than any other vanilla latte you’ve had), take a seat, and engage. The owner/manager sat at the inner corner of the bar while I was there, and asked anyone who sat next to them how they were.

When I go to a new city, I love going to coffee shops. They give you the opportunity to see people candidly in their routine. And if you’re lucky—like I was that day—you’ll get to see some of their dogs, too.

In my short trip to Seattle, I met two people who changed my life.

One was unexpected. He was a bookstore cashier (and maybe owner) in Pike Place Market.

I had been in the store for fewer than 10 minutes. At this point in time he knew very little about me. He knew I picked up a Jane Smiley book and I was going back to school for writing.

“I hope all your dreams come true,” David, the cashier, and I assume owner of the bookstore, said to me as I shopped around his store on Tuesday afternoon.

The next, and most influential, was someone I have wanted to meet since I knew she existed.

On Wednesday morning, I checked out of my hotel, planned my trip to the airport for that afternoon, and headed back down to Pike Place. I was going to meet a woman my mom went to high school with in West Virginia. Thankfully, we’re all a lot closer than we all think.

You can see more of my work at jacischreckengost.com. I'm also on Instagram @JaciSchreckengost.

More stories from Jaci Schreckengost and writers in Wander and other communities.