Bear Conservation and Eco-Tourism in Japan #2: Visit to Shiretoko

by Eli Sooker 3 months ago in asia

For the previous post on this subject, see here.

About 18 months ago, I first heard about Shiretoko Peninsula while watching a documentary called Wild Japan. With my working holiday in Japan coming up, I was looking for inspiration as to where I should travel. Of course, being a conservationist and wildlife enthusiast, I was keen to get out into the most wild and isolated places that might be on offer.

In a country of 120 million people, it's not the easiest thing to do. That being said most of Japan's population is concentrated in the cities. Wander outside of the urban areas and the nature is plentiful—though I would still say it's rare not to see other people at some stage during your explorations.

So when I heard that most of Shiretoko Peninsula (190km2) is off-limits to the public, I got pretty excited. The documentary revealed the extent of Shiretoko's untouched wilderness. It featured Rusha Bay, where the only building on the peninsula was located. The building was a fishing station where only select fishermen were allowed. Brown bears also frequented this bay, so the fishermen had learned to go about their business without disturbing the bears.

Although it's illegal to land in Rusha Bay or anywhere in the restricted area without permission, brown bears and other wildlife can be viewed via a boat cruise from Utoro or Rausu, the two towns in the public part of Shiretoko. There are also a range of walks throughout the rest of Shiretoko where wildlife can be seen. So I decided that Shiretoko would be top of my places-to-go list this time.

14 months ago, I made the visit to Shiretoko. It was everything I'd hoped it would be and more. My only regret was not staying longer! The nature was absolutely incredible. I did all of the walks, (although I only managed part of the Mt Rausu route, as this one takes a few days to complete and I wasn't equipped for a multi-day hike) and even the wildlife-watching boat cruise to see brown bears in Rusha Bay.

I wrote about my first visit to Shiretoko a couple of times already on JapanAustralia and Wildfocus. The posts include some of the close-quarter photos I was able to take.

Now just a few days ago, I was able to return to Shiretoko—although it was just for a few days and unfortunately there was no time for hikes or exploring. I was sent there for work, to take part in a beach cleanup in Rusha Bay itself. It was kind of surreal to think that I was standing on the very shore I'd dreamt about seeing all those months ago. It was a privilege to be allowed into this restricted area of Shiretoko, with virtually no humans except for a few fishermen and the occasional researcher. 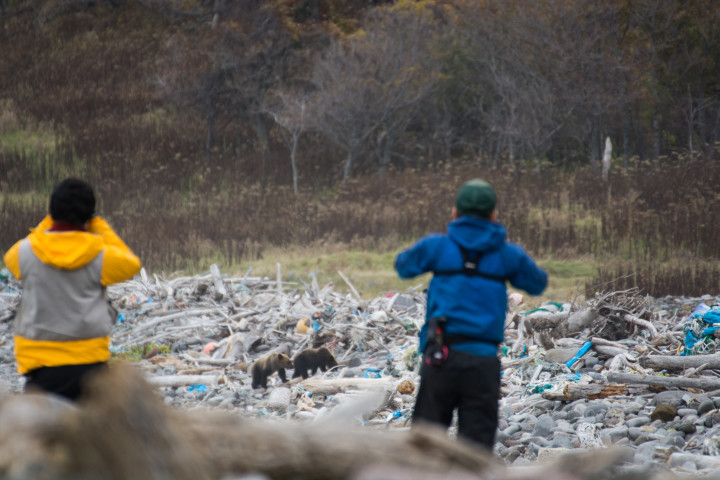 The bears came up to 300m from us without any apprehension

Six people from my organisation (the total of which is around 30 people) were chosen to attend. As the first foreign staff members to be hired, my co-worker and I joined three senior staff members and one other who was preparing to move to our new Shiretoko office.

Although the trip was short, it was possible to enjoy Shiretoko's scenery in its' autumn coat from our vehicle. We spotted several stunning Ezo-shika (Hokkaido deer) along the way including one with an impressive head of antlers. Unfortunately we moved too fast for me to take any photos.

Before long we were passed through the locked gate and over the bridge dividing the public area from the restricted area for wildlife preservation. Despite weariness from the long travels and lack of sleep the night before, I felt my pulse begin to quicken and my body waking up at that point. 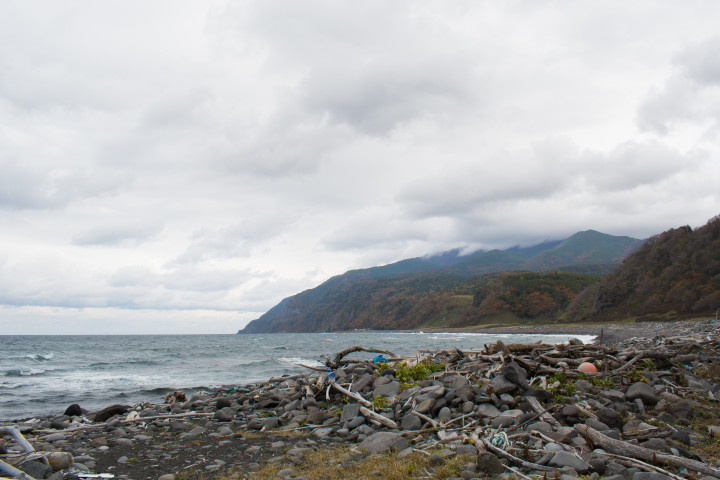 Despite the isolation of Shiretoko Peninsula, it is still subject to the impact of humans in the rest of the world. The photo above shows just a fraction of the rubbish washed up along the uninhabited Rusha Bay. Below you can see the truck piled high with the rubbish we collected in the duration of about 5 hours...

I'm sorry to say, that this too was just a fraction of what was on the beach. 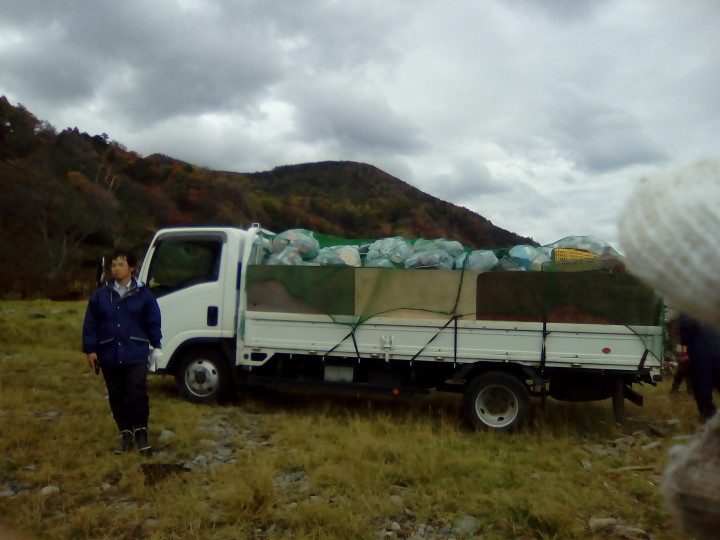 These experiences make me only more wary of the amount of plastic I, and others, use in daily life. Even when I do my best to refuse plastic shopping bags and such, somehow somewhere an unnecessary wrapper will pop itself uninvited into my notice.

I only hope that systems will change and plastic production will fall, sooner rather than later.

With the help of local Rangers, Shiretoko Nature Foundation members, and a lot of volunteers, we managed to pick up quite a bit of rubbish. It wasn't enough to tidy the beach completely, but we did our best.

At one stage, a mother brown bear and her cubs descended from the steep deep forest to pad across the stony shore. This was their homeland, after all, and you could tell they knew it. We were all told to get inside the vehicles while the more experienced bear conservationists (including one of our staff) stood outside and made themselves noticeable to the bears, in the hope that they would keep their distance and change track.

They didn't seem at all phased at first, and crossed 200m towards us within what felt like less than a minute—and this was just their regular walking speed. I wonder what it would look like if they were to run at full speed.

At last, though, they swung a right and ambled back into the forested area. At 300m distance at the closest and using my 300mm lens, the shots I got were limited but still better than what I'd achieved from the boat last year!

Let's hope there will be more chances to do work in Shiretoko in the near future. In the meantime, it's back to taking care of our local black bears in Nagano. Thanks for reading and please support with a tip or by following:

See all posts by Eli Sooker →