The Price of Strength

by Gingerella about a year ago in family
Report Story 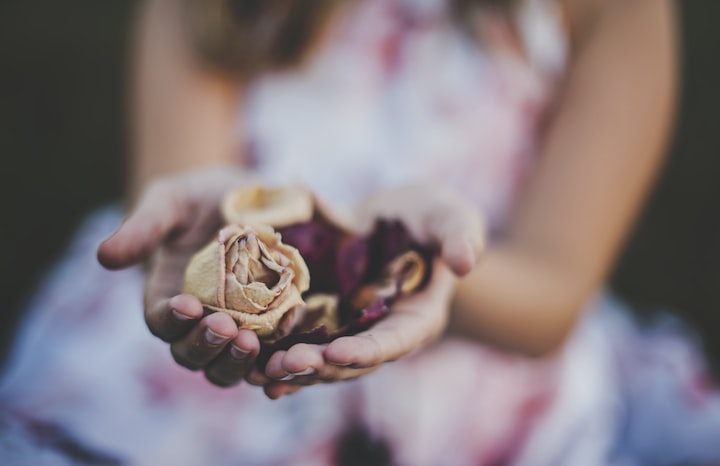 The thought was crystal clear. It came unsolicited and rang through my mind like the toll of a bell. A singular thought independent of emotion as I found him in the hospital bed. My mind had already processed the information my eyes had provided. It took all of what…. thirty seconds? The rest of me had to play catch up.

My grandfather had collapsed before. As a transplant patient and cancer survivor, this was not the first rush to the emergency room, but it was the last. Tears, fervent conversation, hollow platitudes, and styrofoam coffee cups were passed among friends and family. Five years later and I still replay that thirty seconds in my mind. My eyes took in the tubes, the ventilator, and the nurses rapidly switching one canister for another, as the drains filled with blood.

Twelve hours later the world pivoted on its axis. The machines became silent, and his hands grew cold.

The love of my grandmother’s life snatched away.

The life of a man who had been more of a father to my mother than her real one, and the only grandfather I had ever known extinguished.

“You’re cut from strong stuff.” It’s a statement I heard often growing up. The implication being that I come from a long line of strong women. The sentiment, a mother’s wish for her daughter. That she would be able to stand confident and capable in the face of a world that would do her no favors. From birth my mother, grandmother, and other strong women in my life have reinforced that ideology. Be strong. Don’t rely on others for what you can do yourself. You don’t want to be dependent on someone else. Then they have power over you.

But what is strength?

My mother is one of the strongest people I know. When the family is in crisis she is the shelter in the storm. The confident calm that takes charge amidst the panic. She is the measured even tones of reason that check me when I, in anger, selfishly lash out. She’s infuriating because she’s usually right. She is the center that always holds. The one who never falls apart. That is what she role modeled. That is what I emulated.

There is a price for that.

My mother had spent the days following my grandfather’s death carefully helping my grandmother make arrangements. My grandmother spent most of it in shock, her eyes glazed over, as her body went through the motions. Shutting down emotionally, her mind must have been trying desperately to guard itself against the grief of losing a spouse. It was heartbreaking to watch. After finishing arrangements with the funeral home my grandmother went home to rest. Unconsciousness a welcome reprieve from heart ache.

I found my mother alone in the kitchen. She was standing at the table. Silk flowers, whicker branches, and greenery spread out on its surface. The big sliding glass doors behind her provided a gloomy cloud filled backdrop. Even the sky was mourning.

“What are you doing?” “I’m making a funeral wreath.” She started cutting and separating flowers. Methodical snipping noises cut through the silence at regular intervals.

I watched her silently wind flowers and leaves around the wicker base into a ring. She built it. Tore it apart. Built it. And ripped it apart again. Her movements becoming increasingly frantic and frustrated.

“Mom stop.” I walked around the table and took the flowers out of her hands. “I can’t get it to work! It needs to be perfect and I can't get it to work!” My mother sobbed. I wrapped my arms around her. She laid her forehead on my shoulder and took a deep shuddering breath, trying to regain control. I did the only thing I could. I held her.

I’ve hugged my mother thousands of times. For my whole life, she’s held me when I’ve cried. She’s given comfort through breakups, fights with friends, and crises of faith, but until that moment I had never held her. She’d been holding it together for days. I’d seen my mother cry before, but I’d only ever seen her lose it once. A shift had somehow occurred. A quiet changing of the guard unnoticed by the rest of the world. Suddenly, I became the shelter in the storm.

I didn’t cry at the funeral. I remember being proud of that at the time. Like it was a badge of honor. My tears were mine and mine alone. No one else was allowed to see them. I was proud of my “strength.” Our mothers teach us so many lessons, but the most important ones are the ones they never intended or knew to teach. They don’t have all the answers. We, as our mother’s daughters pick up and build on their lessons. As they did before us.

Looking back, my idea of strength has changed. There is an isolation that comes with being “the strong one.” A point where, making sure you don’t have to rely on others, becomes not being able to rely on them. It becomes an inability to open up and let people see you vulnerable. The price of this kind of strength is that it keeps people at arms length. I look back at past relationships and realized as much as I cared for the other person I didn’t really love them. I couldn’t. When you love someone, you give them the power to break you. You have to be brave enough to say I love you, knowing the other person might not say it back. Strength isn’t creating a suite of armor. It’s removing it. It’s letting go.

I am my mother’s daughter, but I am not “the strong one.” I am the brave one and I am capable of incredible strength because I am cut from strong stuff.

I could be anyone, or anywhere. I am a daughter, a lover, and a friend. I am human. What more could you need to know?

More stories from Gingerella and writers in Viva and other communities.