by Denise Willis 4 months ago in body 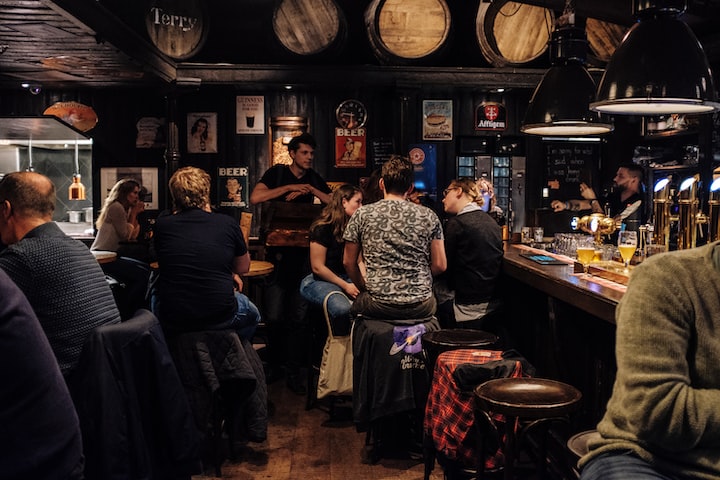 Photo by Victor Clime on Unsplash

His name was Keith Bridden, with eyes so blue that they sparkled and thick, dark hair. I watched him for days while I worked as a cocktail waitress, trying not to be too obvious, but noticed he was smiling at me every time I looked his way. He'd noticed, and my heart skipped a beat in my chest just imagining what it would be like to touch him.

It was Tuesday night, my night off, so I decided to go to my bar and find some people to hang out with. It was a small town, so there was always someone at the bar who was familiar. I walked down the stairs to the bar, the familiar smell of cigarettes and booze rising from the basement and penetrating my nose. It was familiar and a comfort in many ways. I was in the middle of a nasty divorce, and being in the house where my husband and myself had once lived in harmony was difficult. My husband had rented an apartment until the details of the divorce were worked out, so I was pretty much on my own except for my twelve year old son who was spending the week up at the lake with my sister and her husband. That made the house particularly quiet, as I was used to him and his friends hanging out, laughing and listening to their music.

I took a seat at the bar and started making small talk with the bartender. She and I weren't close friends but had the beginning of a good friendship starting. It was wet t-shirt contest night, and we both had a good laugh at some of the contestants. It was mostly older men who attended the event; most of the younger guys sat and continued to drink their beers, taking a quick look here and there but not with interest.

It was then that I spotted him, sitting at the end of the bar. He smiled at me and picked up his drink, swaggering over to start a conversation. His voice was soft, and he reached up and pushed my hair out of my face, telling me nothing should hide the beauty of my face. We spoke about the bar, a little about my divorce and my son, and a bit about his life and how he lived. He seemed like a great guy, so I trusted him when he said there was something he wanted to show me. I followed him into a small room at the end of the bar, a room I had never even noticed before. There was a short staircase that led to a small room below, and he took my hand and led me down the stairs. It was dark, and I assumed he wanted to kiss and touch, but the next thing I knew he had his hand on the top of my pantyhose and was pulling them down. I started to object, and he hushed me, reminding me that I didn't want anyone to know I'd come down there with him. He shoved me back against the seat, and without and foreplay, jammed himself inside me and continued until he reached climax. I felt like the stupidest, most used person in the world. How could I have been so willing to trust someone I'd just met? That was not like me but then with the divorce and everything going on, I wasn't really like myself.

I sat up and began pulling my pantyhose back up, tears running down my face and wanting to slink into the corner and die. He was smooth, taking out his comb and combing my hair down, and wiping my tears, telling me that people will believe anything if you tell them it's the truth enough. He told me as far as anyone knew, nothing happened in that small, dark room.

I heard the bartender yelling last call, so it was my que to get out of there. I stood up and he put his arm around me, smoothing out my skirt so I looked the same as I did when we entered. A lot of people were leaving, and we walked up the stairs and outside into the cool night air. It felt good against my hot face, my eyes beginning to swell from crying. I hurried to my car and got in, and then gunned out and hurried home using the back route. I didn't want him to know where I lived because he might decide he could come in, invited or not.

I sat in my car for a moment, tears streaming down my face again, and when I finally got up my courage I ran to the door and my hands shook as I tried to shove the key in the lock. I could see the lights of a car coming, and I just wanted to get inside and lock the door. At the last moment, the door opened and I hurried in and slammed the door against the world. Quickly I slid the extra lock across the door, then the deadbolt and then I went to each door and window in the house to make sure they were closed and locked. After that, I drew a bath and sank into the tub, scrubbing myself until I thought I would rub the skin off, but I needed to feel clean again.

Never trust anyone that you just met, no matter how smooth they are, how convincing they sound, or how nice they look.