Zach LaVine Has Arrived in the NBA

by William Ricks 12 months ago in basketball

Despite what has been a tough season in Chicago, Zach LaVine has given Bulls fans something to look forward to in the future.

The Chicago Bulls and their fans haven't had much to cheer for this NBA season. They fired their head coach Fred Hoiberg early in the season, they sit near the bottom of the Eastern Conference at 19-47, and they have a plethora of young, undeveloped talent, which points to a rebuild.

However, if one thing can be said about the Chicago Bulls, it's that they have a star in the making in Zach LaVine. The former UCLA Bruin was known for his phenomenal dunking ability, but now he has put the NBA on notice that he is more than a dunker. He is an emerging star in the NBA, and this season was his coming out party.

LaVine made the leap.

LaVine was limited to 24 games last season with the Bulls after suffering a torn ACL. Despite a small sample size, the Bulls saw something worth keeping as they matched the four-year $80 million dollar offer sheet from the Sacramento Kings this past offseason.

Coming off an ACL injury is tough for any player, but a player who has bounce and relies on explosiveness like LaVine, it is that much harder. Many wondered if he'd be the same player after an injury like that, and he has silenced that noise, becoming an even better player than he was before the injury.

LaVine made that leap into young superstardom this season, giving the Bulls a young player to build around in the coming years. LaVine is averaging 23.8 points a game this season, a considerable jump from the previous season (also a career-high). He also improved his shooting, going from 36 percent last season, to 46 percent this season.

He also is posting career-highs in rebounds, assists, free throw percentage. LaVine has been on a tear after the all-star break, putting up 28 points, five rebounds, and five assists a game. He is also shooting almost 50 percent from the field and 46 percent from three-point land.

Beyond all those stats, LaVine has shown leadership on the court. Becoming the leader for this young Bulls team, taking the ball in clutch situations and making big-time baskets.

His game-winning basket against the Philadelphia 76ers Wednesday night (along with his 39 points) was almost an arrival of sorts for the young guard. The NBA has been put on notice that Zach LaVine is here to stay and ready to dominate.

LaVine's stock is rising in the NBA, putting himself in the conversation as one of the best young players in the NBA. The Bulls also have another young star in Lauri Markkanen, so the Bulls need to build of these two players in their rebuild.

The Bulls have a lot of talent that is undeveloped which makes their rebuild a little more of a challenge. It wouldn't be smart for the Bulls to waste these years of LaVine and Markkanen, as they only have a three years before both of their contracts are up. Chicago should make it a priority to at least attempt to get some talent to surround LaVine and Markkanen with.

With a projected $40 million in cap space in 2019, the Bulls could be in play for a max free agent, but so are other teams that seem to be in a better position than them (Knicks, Nets, Clippers, Lakers—just to name a few). Not to mention the question mark when it comes to their head coaching position and the dysfunction in their front office.

Despite the Bulls' struggles, Zach LaVine has made the most of his opportunity and has been playing at a high level the entire season. If he can continue this level of play, don't be surprised if he becomes an all-star in the coming years or even a trade target for some other teams who desire his services in the future. 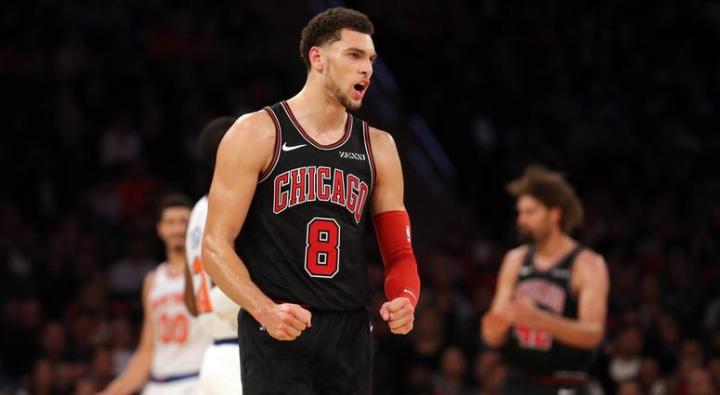 LaVine is building off his success in Chicago, opening up a plethora of opportunities in his future. (Photo via 670: The Score)

I am a journalist who primarily writes about sports, but I also write about video games and music. I've written for multiple new organizations and have had success doing that. I love to inject facts and fun into my writing. I hope you enjoy

See all posts by William Ricks →