by Kesha Janaan about a year ago in activism
Report Story

An Explanation for those who do not understand 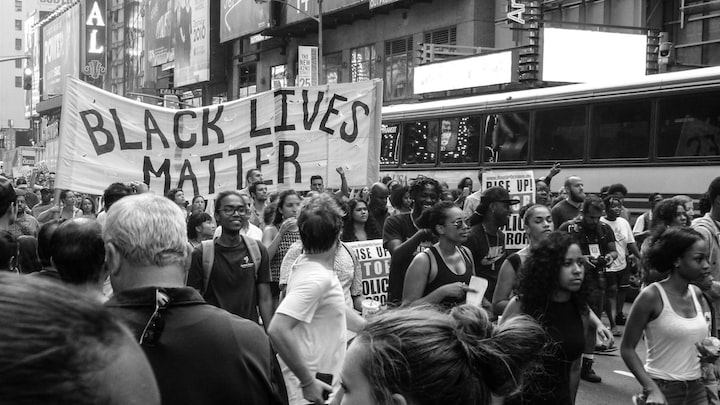 Photo by Nicole Baster on Unsplash

What does Black Lives Matter mean?

The movement vs the organization

Here is a history of the BLM Movement through the lens of a British news channel. I chose this because I felt that having a foreign perspective would help remove some bias.

The Black Lives Matter organization was born from the #blacklivesmatter movement. In fact, one of its founders came up with the hashtag. Here is what the organization is according to its website BlackLivesMatter.com/About

Black Lives Matter Foundation, Inc is a global organization in the US, UK, and Canada, whose mission is to eradicate white supremacy and build local power to intervene in violence inflicted on Black communities by the state and vigilantes. By combating and countering acts of violence, creating space for Black imagination and innovation, and centering Black joy, we are winning immediate improvements in our lives.

Here are the tenants of the Black Lives Matter foundation also found on its website at blacklivesmatter.com/what-we-believe/

We acknowledge, respect, and celebrate differences and commonalities.

We work vigorously for freedom and justice for Black people and, by extension, all people.

We intentionally build and nurture a beloved community that is bonded together through a beautiful struggle that is restorative, not depleting.

We are unapologetically Black in our positioning. In affirming that Black Lives Matter, we need not qualify our position. To love and desire freedom and justice for ourselves is a prerequisite for wanting the same for others.

We see ourselves as part of the global Black family, and we are aware of the different ways we are impacted or privileged as Black people who exist in different parts of the world.

We are guided by the fact that all Black lives matter, regardless of actual or perceived sexual identity, gender identity, gender expression, economic status, ability, disability, religious beliefs or disbeliefs, immigration status, or location.

We make space for transgender brothers and sisters to participate and lead.

We are self-reflexive and do the work required to dismantle cisgender privilege and uplift Black trans folk, especially Black trans women who continue to be disproportionately impacted by trans-antagonistic violence.

We build a space that affirms Black women and is free from sexism, misogyny, and environments in which men are centered.

We practice empathy. We engage comrades with the intent to learn about and connect with their contexts.

We make our spaces family-friendly and enable parents to fully participate with their children. We dismantle the patriarchal practice that requires mothers to work “double shifts” so that they can mother in private even as they participate in public justice work.

We disrupt the Western-prescribed nuclear family structure requirement by supporting each other as extended families and “villages” that collectively care for one another, especially our children, to the degree that mothers, parents, and children are comfortable.

We foster a queer‐affirming network. When we gather, we do so with the intention of freeing ourselves from the tight grip of heteronormative thinking, or rather, the belief that all in the world are heterosexual (unless s/he or they disclose otherwise).

We cultivate an intergenerational and communal network free from ageism. We believe that all people, regardless of age, show up with the capacity to lead and learn.

We embody and practice justice, liberation, and peace in our engagements with one another.

One of the biggest problems I’ve heard people say that they have with the Black Lives Matter organization and movement is that it was founded by a Marxist. While there have been interviews where the founders have mentioned that they are trained Marxists I have not read any particularly Marxist ideology in any of the literature about the Black Lives Matter organization and I do not see any Marxist ideology reflected in the movement. I do think that the average person does not understand what Marxism is so I will provide a definition. Marxism is a doctrine developed by Karl Marx that included economic and political ideology that is considered the foundation for socialism. Where Marxism gets its bad wrap is its variation, Soviet Marxism adapted by Vladamir Lenin and Joseph Stalin that became the foundation for communism. While I do not know which type of Marxism the founders of the organization were trained in; I will assume it was the original version that gave way to socialism. I came to this conclusion because many of the policy changes both the organization and movement are advocating for, involve reallocating government funds to programs and resources for communities. I am including two short videos one explaining the original form of Marxism and the other explaining Soviet Marxism.

An introduction to Classical Marxism

An explanation of Leninism or Soviet Marxism

Why is it not alright to say All Lives Matter?

Ashton Kutcher on All Lives Matter

Taken from Ben Brainard on TikTok

Taken from a Law Professors Response to a BLM Shirt Complaint

What about black on black crime (aka crime)?

After hearing about the Black Lives Matter movement many people ask about black on black crime and what the movement is doing to solve this issue OR why it hasn’t done anything about this issue. First, as someone who has studied the migration and settlement of people and people groups, as well as community and economic development I would like to say, backed up by all of my formal and elective education, that black on black crime is not real. IT IS JUST CRIME. Black on black crime is a concept that was created to support the stereotype that black people are inherently more violent than others.

With that being said, I would like to address the portion of the argument that asks why BLM is not addressing crime in the black community. The answer is because this is not the mission of the movement or the organization. There are specific organizations such as the National Urban League that actively address issues that cause crime in urban areas. Here are a couple of videos that provide additional points of view.

Taken from Ben Brainard on TikTok

I just wanted to add a bit more of my opinion. While I attempted to remain unbiased I’m sure some of my own implicit biases made their way into this article. I would like to add some context so that anyone who reads this may see where I’m coming from and understand those biases. I am a 34-year-old black woman who graduated from the United States Military Academy (GO ARMY!) and served 5 years on active duty to include one tour to Iraq. I love my country and desire for it to be everything and more than I could ever imagine.

While I have not experienced first hand some of the experiences of those who are active in the BLM movement, I have experienced overt racism on many occasions in my life and I do believe that less obvious forms of racism, such as systemic racism and unconscious negative biases toward people of color, exist in our country. I recognize that I grew up privileged in that my parents made the decision to give me a private school education, even though it made things more difficult for them financially. I had the privilege of growing up with a mother who went to college and was very active in helping me take the necessary steps to apply to and get accepted into one of the best institutions of higher learning in the country. I recognize that as a heterosexual, cisgender, able-bodied person I have the privilege of fitting more closely into society’s idea of what a “normal” woman’s life looks like than others. In acknowledging the ways that I am privileged I am in no way saying that my life is easy. I have had many struggles and hardships but none of them were because of my gender identity, sexual orientation, physical abilities, or education.

That being said, I will do everything in my power to make this country one where every person, regardless of their identity, is treated with the dignity and respect that every human life deserves.

I am a jazz, blues, & RnB vocalist and love living life to the fullest. I enjoy chatting about life, music, travel, & current events. Follow me on