HOW TO ACHIEVE WORLD'S PEACE

by Fakhar Abbas 4 months ago in opinion
Report Story

WORLD GOVERNMENT IS INEVITABLE IN RESORATION OF WORLD'S PEACE 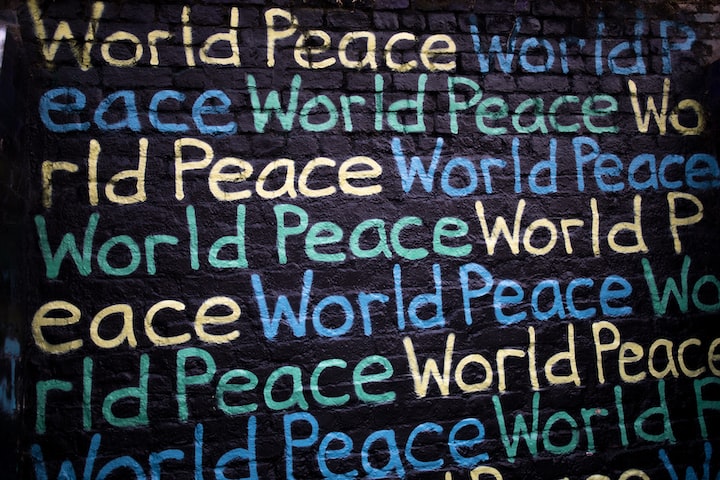 Photo by Humphrey Muleba on Unsplash

We are living in the age of science and nuclear development. Today, the immense power of the atomic bomb works like a slave in our hands and is waiting for our signals to destroy the whole humanity. We can use this power for the development of peace and humanity and to bleed the world with the havocs of atomic war.

In the recent past, atomic power was used in war in Hiroshima and Nagasaki. Only two blasts of the atomic bomb killed millions of people. On hundreds of miles, plants, humans and animals were turned into piles of dust and millions of people were crippled forever, but the current Hydrogen Bomb is three times more destructive than them. If even a few bombs are used in a war, the whole world can be destroyed and ruined.

In the current political situation, the third world war can happen at any time and can erase the traces of old civilization, culture and life of millions of us. One of the world’s leader had said about the same danger of war that either man will not have to eliminate the possibility of war forever, otherwise war will eliminate man. If some people have survived the nuclear war, then their lives will be worse than dead. Because the destruction of the atom will not be limited to a country or a nation, but every human and living being will be engulfed by it.

As the preparations of nuclear weapons are increasing, the danger of nuclear war is getting closer. All the time, the fear of war is riding on our heads, we don't know when the fate of the world will be decided and the dream of man to live on the moon will remain unfulfilled. It is not that the warring powers do not have an estimate of the loss of a nuclear war, everyone knows that there is no question of winning or losing in a nuclear war because there will hardly be any human left to see the outcome of a nuclear war. Therefore, hardly any country dares to initiate nuclear war.

But in war everything is possible. A person can make crazy decisions in certain situations. For the protection of someone’s false honor and glory, someone can be compelled a person to use a hydrogen bomb.

The threat of a third world war has never been greater than it is today. This danger can be prevented not by war preparations but by the power of peace. Most of the efforts that have been made so far to maintain peace in the world have failed because one country does not trust the other or the roots of hatred are so deep within them that it hinders mutual friendship.

After the First World War, the Peace Conference called by the League of Nations proved to be completely useless. The UNO had more influence than the League of Nations. But even UNO has not been able to present any definite and definitive solution for peace. The world is still divided into two groups, the Russian block and the American block. Until, the spirit of unity will not be created in all the countries until then the world will be in danger of war.

To establish peace in the world, there is a need for a global power that is more powerful than the UNO. Which is completely prohibited for keeping weapons of war, because as long as the preparations of weapons of war continue, the threat of war will continue to hover. There is also a need to ban nuclear explosions. It is possible that in the coming era national and ethnic prejudice will end and a world government will be formed. The threat of war can be completely averted only when a world government is established in the world. Maybe this dream will become a reality.

More stories from Fakhar Abbas and writers in The Swamp and other communities.