by Tripp Any Where about a month ago in history

One "SHELL" of a Find 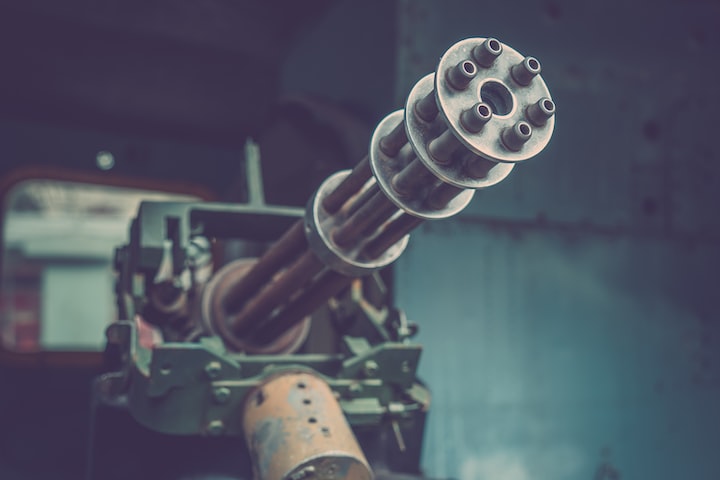 Photo by Rod Long on Unsplash

The word that incites fear.

The word we hold so dear.

It's who we are inside.

The fight for PEACE and pride.

What do we know about WAR?

The United States has always been victorious, right? Well, mostly. When we turn the pages of rewritten history we learn how we prevailed against odds built to destroy us. We were an 18th Century American Revolutionary badass, yes? Of course we were! It is etched in all of our text books. The bloody lines of battle became sealed in history by those opposing loss. Defeat was not a word frequently used,even when being defeated. Morals, chivalry, and honor only weakened those who possessed it, so savagery was predestined and required in order to make peace. The United States was an untouched target. Waiting to be attacked. The U.S. rein over the Indian War lasted through the 19th Century, until the War Of 1812, when the British Army invaded Washington.

The invasion of The Capitol and "Burning of Washington" delivered hard, failing blows to the U.S. ego. We lost and quickly learned the definition of defeat. I guess somehow The U.K. and The U.S. finally decided their "current peace tactic" wasn't so fucking peaceful after all, and created an "actual" peaceful treaty in 1815. The Treaty of Ghent.

Solitude only lasted about four years when the First Seminole War happened; However, I'm not too sure why this happened since EVERYONE had such a PEACEFUL approach to things.

American settlers refused to be considered a losing predecessor, which makes sense if your feet are planted in a battle you started. They were fucking beasts in other words! War was not a threat any longer ,it was a belief.

The U.S. surpassed the second and third Seminole War with victory, along with "many" other tragic blood filled battles. Debating was a thing of the past; It was outdated and activating war was the only solution. Death and dismemberment became civil life lessons, and if you wanted to survive, you had better learn fast. The infamous "kill or be killed" mind frame became equivalent to core values.

We entered the American Civil War as barbaric as the rest, and ultimately demolished the idea of confederacy. Century after century, we battle-axed through wars claiming victory in the name of WORLD PEACE! Makes sense, right? I'll kill you in the name of peace!

In the 20th Century, we finally came face to face with the first World War or the "Great War", as it's known, and was crowned victorious in 1918. Unfortunately, this glorious basking was shot down, because The U.S. swallowed defeat two years later during the Russian Civil War. However, you know The U.S. has major bounce back and rose to victory yet again, by aiding in the orchestrated collapse of The Japanese and The Italian Empires in 1939-1945 with WORLD WAR 2. The American peace, land, and prosperity were all at jeopardy. We were at WAR with WAR!

Well, The United States continued in their success with "keeping the peace", until the years 1955-1975, which we all know as The Vietnam War or a sequel to the Cold War. The act of hate and war that was cast upon the earth, now murdered by peace makers.

And I own a piece of that murder!

A piece of our PEACE, and it comes in the shape of a 20M M18A3 Calibrated Shell.

It is 2021 and we are only 18 years shy of the very day these bullets fired for our peace. 100 years ago four men stood in close radius of an Oerlikon 20mm automated cannon and continuously loaded these 7 3/16'' long shells by the hundreds. Before all of the artifact pros scream at me, let me confirm that these are actually "Dummy Shells" and much larger than that of live ammunition rounds, but nonetheless, what they represent is far more treasure-able. Yeah, so these banging ass vintage bullets fired at me from a yard sale. I couldn't resist. Now, they hold my aloe and tell me stories.

When I look at them I see trenches.

I see life and history and gore.

The victories of cold wars made new.

Yesterday is Today as Today is what's true.

A war for a war can't be made without YOU.

If it's RESPECT or EGO or MONEY or MORE

Stop all the lying we can't keep denying,

It's not FUCKING PEACE we've been fighting for.

Thinking became too much, so I started writing. Bio still in progress ........

See all posts by Tripp Any Where →