by Kylie Calwell 9 months ago in stigma 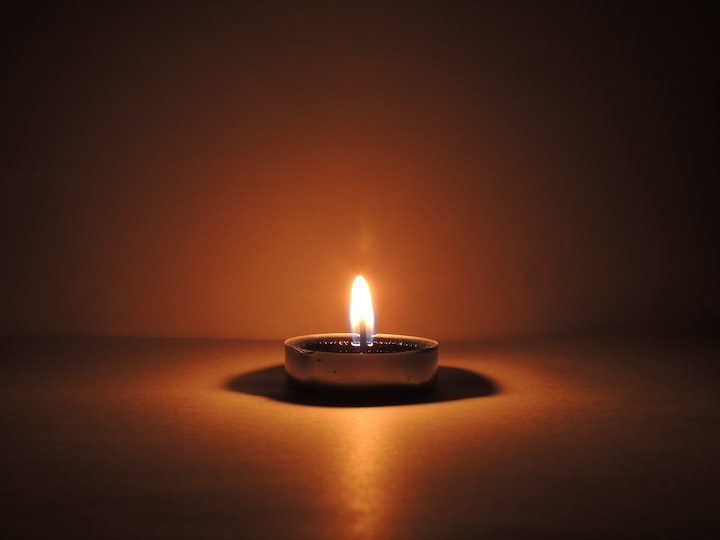 Photo by CHIRAG K on Unsplash

I know I should feel, but I can’t.

I should be happy, but it’s all crap.

I smile for my parents.

I do well at school.

I go through the motions,

It’s a mask I live behind so you won’t reject who I really am.

I laugh, you don’t notice the pain it covers.

You look at me, not really seeing me.

When I’m with you I’m careful.

You don’t see the scars, the old ones

or the new ones freshly scabbing over.

How can I be what you want me to be, when I’m not sure I want to be at all?

Zoe stopped writing and re-read the last sentence. Almost absently she ran her fingers through the flame lighting her writing space. The well-practised move repeated over and over, slightly slower each time until she could felt the heat. Removing her hand she sat transfixed by the ever-changing colours; reds and oranges blending with the warm yellows and the occasional glimpse of blue or green. A muted orange glow washed over everything, enclosing her from the darkness of her reality.

Blinking broke the hypnotic hold of the flame. The slight movement of her head reflected in the mirror catching the corner of her eye. Turning she stared at her own reflection.

That girl had shoulder length brown hair tied back into a ponytail, escaped wisps barely visible in the low light. Her nose was straight, her lips weren’t exactly plump and kissable. Other details she could only see because she knew they were there: the cluster of pimples hiding under her too long fringe, freckles scattered across her nose, eyebrows lacking arching definition, blue eyes that would change to grey depending on her mood. There was nothing distinctive about her face at all.

A loud knock broke her contemplation.

Closing her notebook and shoving it in her dresser drawer, she replied, ‘Coming Mum.’ Blowing the candle out and flicking on the light, Zoe took one last look at herself before flinging open the door and almost crashing into her waiting mother.

‘You never used to lock your door,’ Christine, studied her daughter.

‘You’re not doing anything I wouldn’t approve of?’ Christine put some clothes on the end of the bed and looked around. ‘You’ve been sitting in the dark again. I can smell the candles.’

‘If there were candles, it wasn’t dark,’ Zoe didn’t attempt to keep the sarcasm out of her voice. ‘Besides I like the dark.’ Feeling her mother’s gaze on her, she was unable to meet her eyes. At her mother’s quiet sigh it felt as though her heart tightened, but she couldn’t find words to say what she desperately wanted to say.

‘What are your plans?’ asked Christine.

‘As long as hanging doesn’t interfere with your grades.’

Zoe finally looked up, ‘There’s more to life than grades.’

Zoe steeled herself for the mini lecture she knew was coming, and was surprised when her mother walked away without saying a word. Her chest loosened as she drew in a deep breath. It was easier to breathe when her mother wasn’t grilling her.

Retrieving the hastily hidden diary, she shoved it into a shoebox at the back of her closet, randomly kicking shoes over top.

‘I love your mum,’ said Lara as she waltzed in, handing Zoe a coke. ‘So what are you wearing on Saturday night?’

Zoe looked at her friend suspiciously, ‘PJ’s, why?’

‘Not if you’re coming to the movies with Owen and me.’

‘Not that going out with you and your boyfriend won’t be huge fun, but I think I’ll give the pity invite a miss.’

‘If that’s the way you feel I’d better call Connor and tell him to find someone else to bring.’

Zoe’s jaw dropped and her eyes narrowed. ‘What did you do?’

Lara pulled a face at her, ‘You’ve been hot for him for ages.’

‘But I can’t...’ Zoe let the sentence hang as self-doubt flooded through her.

‘You can and you will,’ insisted Lara.

‘Don’t shake your head at me,’ Lara glared at her.

Lara changed her approach, ‘You’d be doing me a huge favour.’

Zoe swallowed the words she was about to say. Not for the first time she wished she could talk about all that was going on in her life, but it just wasn’t an option. She’d thought about it, even tried to build herself up to it, but the words always got stuck in her throat. The fear of seeing such disappointment in her friend’s eyes, the pressure of having to answer questions she didn’t have answers to.

Zoe blinked. ‘Just can’t believe you didn’t warn me about this thing with Connor.’

‘Three days! You’re such an idiot.’ Zoe threw a pillow at her friend’s head. ‘Are you happy?’ The words slipped out and Zoe flinched at own her serious tone.

‘Of course not,’ laughed Lara. ‘I’m a teenager, I’m supposed to be angst ridden.’

‘Oh you were serious?’

Realising her mistake a second too late, Zoe wasn’t sure how to take it back.

Lara studied her friend through suspicious eyes. ‘Of course I’m happy. What’s not to be happy about?’

‘We’re teenagers,’ said Zoe weakly. Unable to bear the scrutiny, she walked to the window, letting her attention be taken by the leaves twisting and waving in the breeze.

‘Exactly – we’ve got the rest of our lives ahead of us.’

‘And that doesn’t bother you?’ Zoe’s eyes flicked away from the window to observe her friend.

Lara lounged back on her elbows. ‘I don’t think about it. I’m not thinking past Saturday night. Are you sure you’re feeling okay, you’re starting to act weird. It’s okay though because I’m used to your weirdness and I still love you.’

Zoe spoke without thinking, ‘Only because I know all your darkest secrets.’

Struggling to keep the smile on her face, Zoe felt a desperate need to blurt out her secret, but the words lodged in her throat, unable to get more than halfway out.

Zoe pulled herself out of the thoughts spiralling through her mind. She could spend so much time thinking about it, yet was no closer to understanding any of it.

Looking around, she realised she’d wandered further than she’d intended. Her gaze skimmed over shop fronts, pictures in a window display catching her attention. She had half an hour before meeting her mother, with nothing better to do she wandered in to have a look around.

The interior of the gallery was white. Zoe smiled inwardly, it was exactly how she thought a shop like this should look. Large abstract pieces and some landscapes dotted the walls, smaller works were displayed on easels, scattered randomly about. Three quarters of the way around she stopped, mesmerized by a painting that sent words tumbling over in her mind; truth, light, dark, confusion.

‘Were you looking for something in particular?’

Zoe jumped. The woman standing behind her was a fraction shorter than she was. Her milk chocolate brown, curly hair was clipped back in a way that somehow looked artfully messy. She had an open smile that went all the way to her hazel eyes and Zoe felt instantly comfortable. ‘Pardon?’

‘Zoe,’ said Zoe, automatically taking the outstretched hand, a little surprised by the firmness of the woman’s grip. Looking down she noticed the edge of a scar peeking out from her shirt sleeve and quickly broke the contact.

Astrid turned her attention to the picture Zoe had been drawn to. ‘So Zoe what’s your medium of choice?’

‘You sure about that?’

‘I tried painting, my pictures never turned out like I wanted. I do better with words’

‘So what do you think of this piece then?’

‘You really want to know what I think?’

Astrid smiled, ‘I really do.’

Zoe studied the painting; colours, brushstrokes, light and shade. Unconsciously she scratched at her arm. ‘I think the woman longs to live in the light, but feels trapped in the shadows, and though she can’t see the way out, she hasn’t given up hope.’

‘That’s a powerful impression. I’m flattered it spoke to you so strongly,’ said Astrid.

‘You painted this?’ Zoe couldn’t keep the amazement out of her voice. She thought the picture was incredible and wanted say more, but fear had her breaking the eye contact.

‘I’ve never had a painting sort of speak to me like this one did,’ Zoe admitted hesitantly. ‘I’ve never gotten a whole story from one picture before.’

‘Would you like to have it?’ asked the artist.

‘So?’ Astrid shrugged. ‘It’s mine to do with what I want, that you saw hope means a lot to me.’ She expertly unhooked the picture and handed it to Zoe.

‘That’s a really nice offer, but I can’t accept it,’ Zoe handed the painting back. ‘I’m sure someone will love it enough to pay twice what you’re asking.’

Astrid pushed the frame back in Zoe’s direction, ‘Maybe, but I have a feeling you could do with some hope.’

Astrid nudged the edge of Zoe’s sleeve. ‘You were scratching you’re arm earlier.’

Zoe pulled her sleeve as far down as she could, ‘That’s nothing. I broke a glass when I was doing the dishes. I’m good, really.’

‘I really do want you to have the picture,’ said Astrid.

‘I wouldn’t know where to put it.’

Zoe’s phone beeped, ‘I’ve got to go.’ She started to leave.

‘If you ever feel the need to talk,’ said Astrid, ‘I’m nearly always here.’

‘I don’t know what you mean,’ Zoe pushed through the door at almost a run, not realising she still held the painting.

Receive stories by Kylie Calwell in your feed
Kylie Calwell
Read next: This is my strength