A bar is always packed with all kinds of characters. 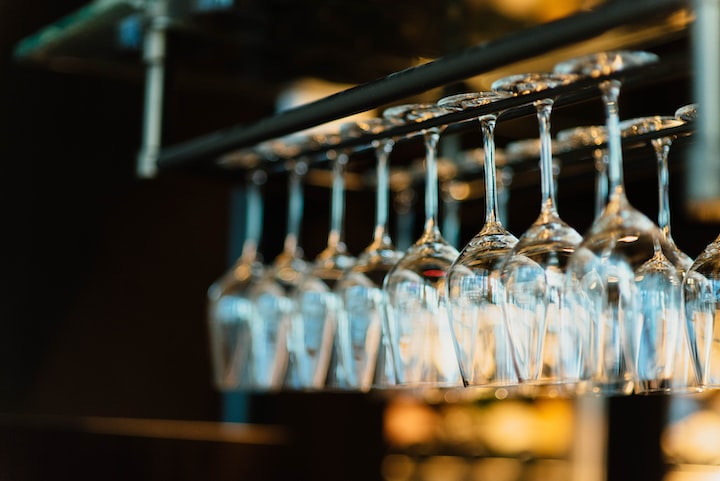 EXT. OUTSIDE OF THE BAR DANNY’S - CONTINUOUS

There are a few people are waiting in line outside of the bar to get in. It’s not too crazy or busy outside.

The bar has people all over its mahogany counter tops and every bar stool is filled.

INT. DANNY’S - BEHIND THE BAR - CONTINUOUS

SAMMY (24), has long chestnut hair that is swept over her shoulders, and her black top is riding up, farther away from her black jeans and matching sneakers.

She is running around a table filled with fraternity boys and writing down their orders.

She finally finishes getting everything down on her notebook and goes back behind the bar to start preparing the drinks.

A DRUNK GUY (40), looks over at Sammy who is putting drinks in glasses quickly.

I’ll take another when you get off your break, sweetheart.

Does it look like I’m on a break, moron?

Sammy pours tequila shots for the three girls in front of her and doesn’t look over to the drunk guy whose jaw has dropped significantly.

(slurs) Hey, I know Danny Miles personally. Seeing as he is the owner of this bar and all, I’d appreciate some respect before I get your skinny, little ass fired.

You sure about that?

The drunk guy begins to fidget in his chair as Sammy stares him down.

Because he’s been dead for two years now.

The drunk guy crosses his arms and nods.

Sammy rolls her eyes as she watches the drunk guy begin to flirt with a woman sitting next to him.

AL (56), another bartender, whose salt and pepper hair-do was looking more salt than pepper these days walks towards Sammy and slides her a drink.

I can always tell when an Old Fashioned is needed. Good thing you handled that guy in time, Mikey and Jax were starting to walk over.

Sammy looks over to the front of the bar at the two bouncers, MIKEY (37), who is covered head-to-toe in tattoos and JAX (28), who is so buff that his suit has wrinkled a bit from his bulging muscles.

Al winks and walks back over to the other side of the bar. Sammy sips from the glass, puts it underneath the register and hauls the large drink order towards the table of FRATERNITY BOYS.

One FRATERNITY BOY (21), looks up at Sammy when she gets to their table.

I gotta tell ya, Danny’s is my favorite bar in all of New York.

Sammy continues to hand them their drinks.

Are you the one in charge, then?

Was left to me about two years ago.

Fraternity boy takes a sip of his drink and smiles. He runs his hand over the small of Sammy’s back and pulls her closer by the waist.

So, what’s your name sunshine?

Sammy wraps her arm around him tenderly.

That’s weird you don’t know, your Dad was screaming it all night long.

The other fraternity boys begin to laugh as Sammy shoves the boy off of her. His face turns red as Sammy struts away. She can hear his friends mocking him even as she distances herself.

The fraternity boys have left and Sammy walks over to their table and starts wiping it down and clearing away the glasses.

She notices a hefty tip underneath one of the glasses and smiles to herself.

JEN (26), the final bartender, who has her long blonde hair in a ponytail walks over to Sammy.

Looks like your sass and sarcasm was favored by the little twerps.

I love it when my hostility works in my favor.

INT. BAR - EVENING - THE NEXT NIGHT

Sammy is walking back and forth from tables on another busy night, with a smile on her face. She noticed her friend Dan waltzed in with his new flavor of the week. He would come in for 'first dates' more often than Sammy could count.

Jen notices and walks over to her.

Well, aren’t we in a good mood this evening?

I actually am. I can’t wait to go out tonight.

You better not try and get naked wasted.

God, Jen. What even is that?

Sammy shakes her head and laughs at Jen. As Jen walks away, a woman, CHERIE WINDSOR (50), who is dressed in a plaid skirt and pink top with a Michael Kors bag, walks up to Sammy.

Are you Samantha Miles?

Sammy glances over to Cherie.

It’s Sammy and it depends on who’s asking.

Cherie looks startled as Sammy tries to waft the smell away with her hand.

I think you’re in the wrong place.

Are you asking me or telling me?

Cherie straightens up and looks Sammy in the eye.

Sammy gets a confused look on her face and looks back at Cherie.

My name is Cherie Windsor and I’m your Mother. Do you have a moment to talk?

Sammy's jaw drops. She thinks back to December 5th, 1999 when she last saw this woman sitting before her.

Close your mouth honey, you look like a trout. And while you're not busy, I'd love a large glass of Merlot.