by Rebekah B Lowri 5 months ago in camera

Before digital photography's complete upheaval of the photography industry, Kodak's Aerochrome was a popular infrared film that produced a distinctive pink where there should have been green. The particular effect created by this film transforms a traditional landscape shot into a magenta and crimson wonderland.

Infrared film works in such a way to invert the greens and the pinks, registering a wavelength of light that that the human eye cannot register, and in any photos the greenery in rendered an otherworldly pink hue. Kodak described the false-colour reversal film as having high dimensional stability for vegetation surveys, camouflage detection and earth resources.

Historically, this kind of infrared colour film was loaded onto aeroplanes and helicopters and flown over national parks, to survey how healthy the trees and vegetation was. The healthier the vegetation, the more vibrant the red and magenta colours would appear on development.

Kodak Aerochrome regained popularity in recent years when Richard Mosse, an Irish documentary photographer, photographed the conflict and effects of the war in the Democratic Republic of Congo. He shot on the now discontinued infrared , the foliage and the green of soldiers' camouflage uniforms transformed into hues of lavender, magenta and crimson.

I highly recommend spending some time with his moving photographs from this particular series from his time spent in the Democratic Republic of Congo. You can find images from Richard Mosse's infra series here. 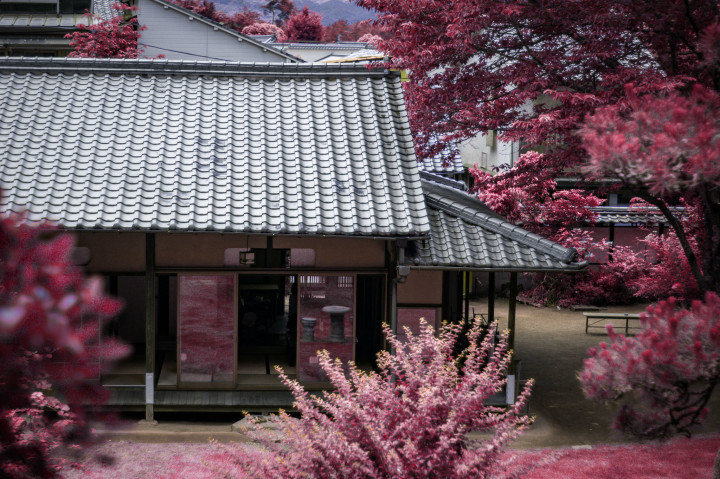 Kodak no longer produce this film and most of the existing ones have long expired or very expensive (upwards of $80 a roll), but the fascination for this fantastical colour palette kept me looking for an alternative way to create images with this vibrant magenta.

Every spring millions of people from all over the world flock to Japan for the Cherry Blossom season. Hanami, which translates to 'flower viewing', is when the Japanese go to view the blush pink flowers of the Sakura, or the Cherry Blossom. Hanami also take place at night, but in this case are called Yozakura, or 'night sakura'. Lanterns are placed in parks such as that in Ueno, Tokyo, so that viewers can enjoy the beautiful flowers long after dark.

Unfortunately, we can't all get to Japan to witness the incredibly beautiful Sakura season, as it proves to be the most popular, and thus the most expensive time of year to visit. So, if you crave the pinkish hues of the Cherry Blossoms, but can't get to Japan, go find yourself in a lush green spring or summer landscape anywhere in the world, take some stunning snaps and head home. Fire up your computer and there you can digitally recreate the pink of Kodak Aerochrome and the Sakura season.

The images you'll see in this article were taken during our June trip to Japan, processed in Adobe Photoshop and Lightroom. The lush, bright green you'll see in the spring and summer months makes for the best transition into Dr Seuss style wonderlands.

Using the channel mixer and hue/saturation tools, magically turning the greens and pinks inside out, leaving you with a pink paradise. Though I don't condone it, this would be the perfect way to fake Japan's famous cherry blossom season.

In the meantime, there is no shortage of infrared photography in the Tumblr or Pinterest archives for some fantastical pink-spiration.

Scroll to the end of this article to find the link to the super useful YouTube video tutorial that I personally used to get to grips with how to transform my images from green to pink. It's a deceptively simple trick using Adobe Photoshop. 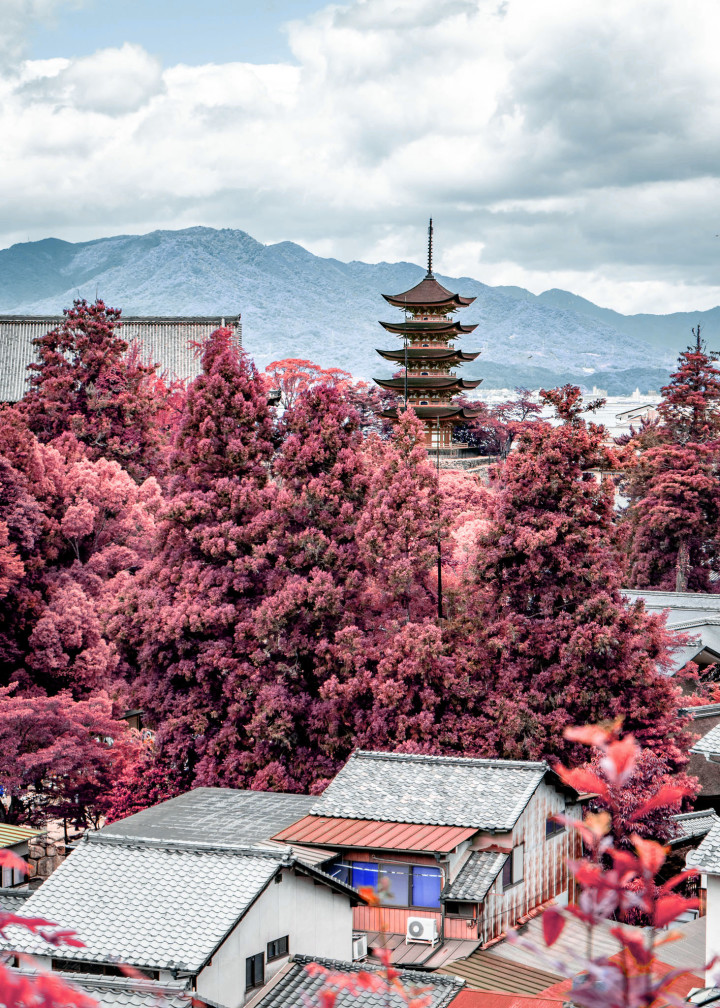 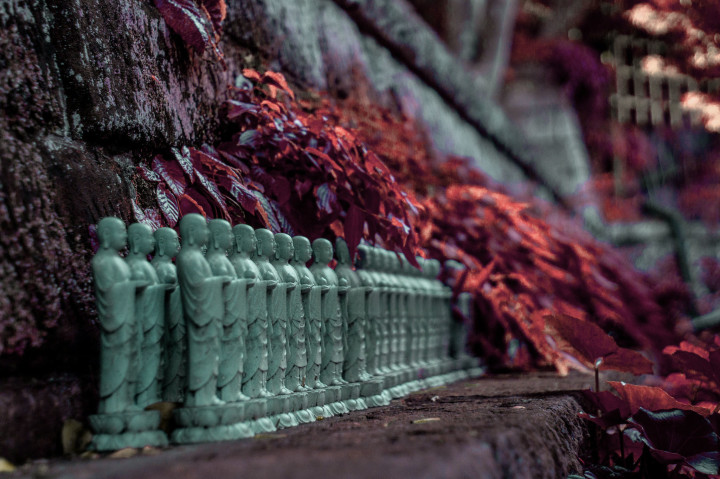 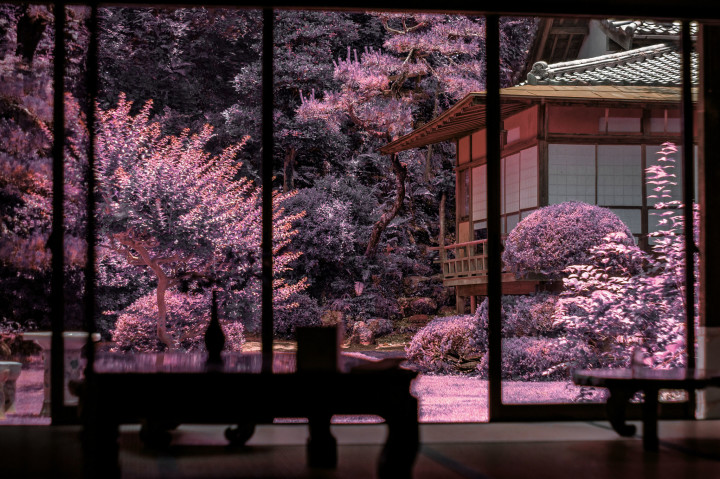 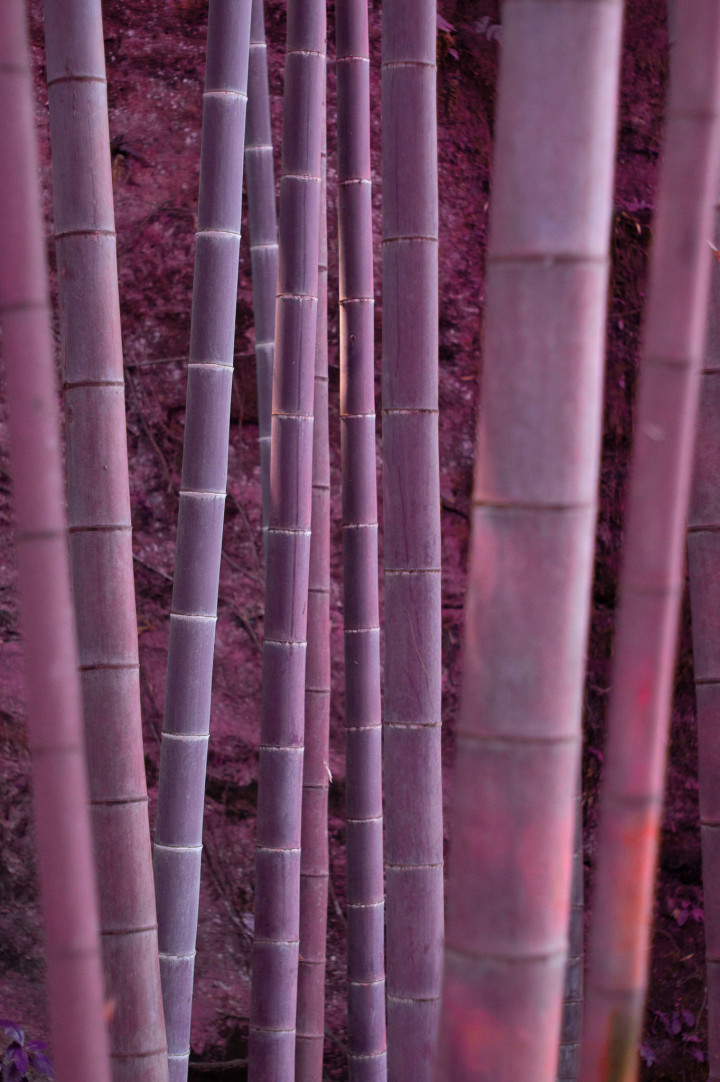 Grown in the British Isles, exploring beyond.

See all posts by Rebekah B Lowri →