by Wendy Knight 5 months ago in camera

I'm not a professional photographer, but when I pick up a new hobby, I sink deep into a pit of research, number-crunching, and ultimately, depression over how much things cost.

Eventually, of course, I claw my way out, dehydrated and lacking feeling in my extremities, but equipped with gigabytes of newfound knowledge so niche that it is largely worthless in society.

So here I am, a hero of sorts, to save you from falling into that same pit. Looking to buy a camera? It's a big decision, and one that will likely involve a fair amount of monetary investment! Let's start with the basics of mirrorless cameras for amateur photographers.

Mirrorless cameras have become increasingly popular among amateurs and professionals alike, largely due to their compact designs, which allow for the inclusion of additional lenses and equipment for the traveling photographer. Mirrorless cameras are aptly named; traditional DSLRs (Digital Single Lens Reflex) contain a small mirror (hence the "reflex") which reflects the image up to the viewfinder, allowing the photog to view their subject in real-time. Mirrorless cameras create a digitized rendering in an EVF (electronic viewfinder), eliminating much of the internal mechanisms and cutting the weight of the traditional camera in half, while unfortunately relying more heavily on the battery.

While many cameras are technically "mirrorless" (compact digitals as well as larger point-and-shoot models), the term became widely accepted around 2008 when Panasonic released the Lumix DMC-G1. This also marks the start of the MFT (Micro Four-Thirds) era (referring to a 4:3 shooting aspect ratio), an era dominated by Panasonic and Olympus, producing models that have ebbed and flowed in popularity but still boast a core following that keeps the system alive. Sony's APS-C system (shooting in a 3:2 ratio) emerged as the primary rival to the MFT in 2014 with the lauded A7.

So, do I want a mirrorless camera or a DSLR?

The misconception is that one should progress from a camera phone to a mirrorless model to a DSLR, but with the top-shelf mirrorless cameras of today, it is possible to never own a DSLR and still shoot at a professional level.

DSLRs are large and clunky, but they are more customizable and shoot better in low light. Mirrorless models are light and portable, but offer fewer accessories and advantages for the tested shooter. The good news is this: whether you're an amateur photographer who just wants to take better pictures than your mom on her iPhone, or a semi-pro who periodically shoots engagement pics for family and friends, there is a mirrorless camera for you.

Let's take a look at 5 good mirrorless options for these wannabes.

If you're looking for a cheap entry-level camera in the mirrorless genre, this Fujifilm model from mid-2018 deserves a spot on the list. With a retro look and feel, the X-T100 will certainly turn heads on spring break, but the photographs you produce may have a less similar effect. While 24 megapixels will get the job done, the X-T100 has a notoriously spotty autofocus, and even though it's technically a 4K mirrorless camera, the video capabilities cap out at 15 frames per second. Despite these flaws, for those looking to take the next step up from smartphone photography, the X-T100 is worth taking into consideration, and should cost you less than a William McKinley. (That's a 500 dollar bill, and don't ask me how I know that, because I, like you, have also never seen one.)

If you have a slightly bigger budget and want to take a larger step into the world of photography, the GX9 from Panasonic is trusted by many in the field. A great mirrorless camera for travel, weighing in at just 400 grams, the GX9 is only a 20 megapixel unit, but it is well-stabilized with focusing speeds as fast as 0.07 seconds. Panasonic removed the low-pass filter from previous models, allowing the GX9 to capture finer details than the megapixel count would suggest, and colors in post-production appear true to life. The ability to capture high-quality stills from 4K videos is an especially nice bonus.

Carrying less impressive stats than the more formidable (and pricier) Z6, the Z50 is nonetheless a reputable and popular option for new shooters. A heavy build brings confidence that it will survive your trek across the Swiss Alps, but poor battery life and the lack of IBIS (in-body image stabilization) make the Z50 a less appealing investment compared to others on this list. For $800+ (unless you find a great deal on eBay) your money could be better spent, but if you're coming from the Nikon family or are most comfortable with Nikon's firmware, this is the option I favored most from their lineup.

While not as celebrated across communities as its younger brother, 2019's a6100, Sony's 2014 a6000 is still a stellar option for photographers looking to join the game, improve their game, or even win the game. There's no 4K video, but 24 megapixels and a stunning 11 frames per second of continuous shooting will bring clarity and confidence, respectively, to any shooter's portfolio. At half the size of a DSLR — definitely the smallest model on this list — the a6000 is a prime choice for those looking for a one-stop shop that can fit in almost any pocket.

Olympus' OMD series, first launched in 2012, has a quieter fanbase and lacks the name recognition of its rivals, but like any reputable line of product, they've improved greatly upon the formula with time. Boasting 4K video, a jaw-dropping 30 continuous fps (when in Pro Capture mode), and Olympus' acclaimed 5-point IBIS, largely eliminating the need for an everyday tripod, the E-M1 Mk II has become a favorite for rookies and pros alike. After a firmware update in early 2018, the Mk II's ability to autofocus on faces in both still and video modes reached a level of accuracy achieved only by high-end DSLRs, pushing the popularity of this 2015 model to even greater heights among shooters and videophiles. For that reason, on a list of mirrorless cameras for amateur photographers, the Mk II lands the number one spot. 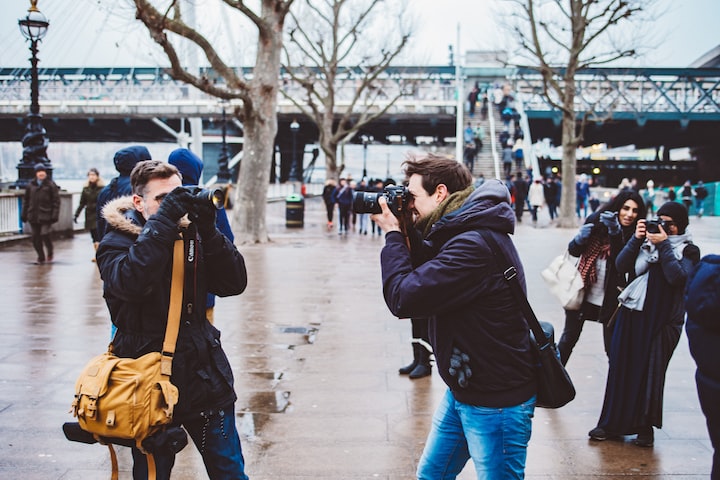 By Clem Onojeghuo on Unsplash

As you can probably tell, this list is far from exhaustive — names like Canon, Kodak, and others would certainly earn a spot on a more rigorous examination of the digital camera market. You should peruse other mirrorless camera reviews before investing any money in such a valuable piece of equipment. But if this was the first click on your journey to becoming a proud mirrorless camera parent, you can't go wrong with one of these industry staples. Good luck, and happy shooting!

A travel photographer who never wants to stay still for too long. She prefers big cities to country landscapes and loves learning about all cultures and subcultures. She&rsquo;s truly a free spirit.

See all posts by Wendy Knight →

My motto is "bare your skin," meaning be yourself in life and find comfort in being you. As a photographer I try to have the people I photograph become comfortable around me and be vulnerable with the camera. It is important to me that I am able to show people the beauty that they bring to this world and that is something I am working on doing for myself. Now we all know the statement, "photographers are the worst subjects." Yes, it is true at least for me. It is this sense of lack of control, we've made it up in our mind that it is already a bad picture or that we are not photogenic enough.

I'm a surfer. An environmentalist. A writer. And last, and most importantly; a photographer. I've had a camera in my hand since day 1, and I've never known anything different. Yes, I am a Gen Z'er—so I've never known anything different than digital; the curse of this generation and the epitome of instant gratification. But it doesn't mean that I don't know what film photography is. I actually own 2 film cameras and have been learning to use them recently.