When mommy is away, her kitty acts like a stray. 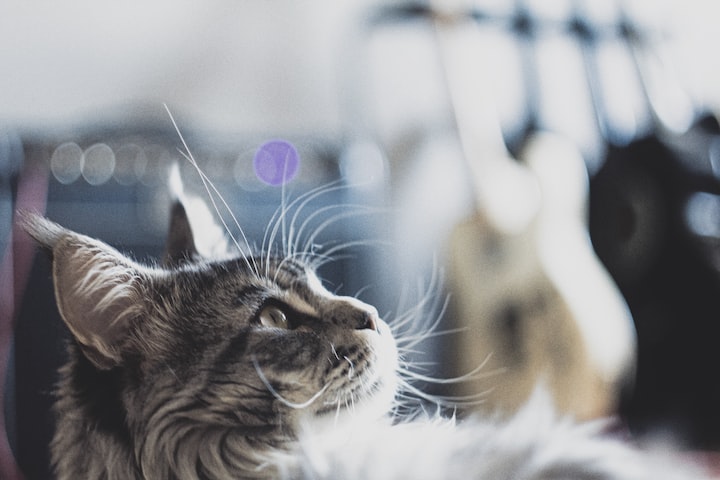 Photo by Yurii Stupen on Unsplash

I have a precious Maine Coon cat. She is a big cat with an even bigger personality. She isn’t affectionate with everyone, but if she loves you, you get unlimited kisses and snuggles from her. Her favorite foods are fresh chicken and cream cheese. She will lightly pace or jump between your legs and purr as she smells all the scents of a homemade meal being cooked. Nothing brings her out of hiding faster than the smell of some yummy treats.

I can’t imagine that she would ever do anything wrong, she is the most innocent cat. She never made a mess or hissed at anyone, she was always so innocent until one day I got home and found something strange. It was a small dinosaur plush cat toy that I knew was not Lacey’s. “How did that get there Lace?” I asked her as she looked at the toy then back up at me with those big green eyes. She meowed and jumped into my lap for some head scratches. I just figured it could have been a present my parents gave her when I wasn’t around and let it go and I snuggled up next to my big fluffy girl.

The following week I got home and found litter all over the place. Lacey never made messes like this. She was rather secretive about her business. Was she sick? I cleaned up the mess and searched the web for a little camera to put inside my home to make sure Lacey was okay while I was at work. I got the camera in two days and installed it in the living room area where Lacey usually hangs out. I got up the next morning, got my cup of coffee, gave Lacey a kiss on her cute little nose and left for work.

Everything seemed fine on camera and Lacey seemed to be eating and napping normally. It was Thursday when I checked my camera to check in on Lacey and I saw a few strange things, one being that the fridge was open. “Did I leave that open?” I thought to myself and soon realized that I never even opened the fridge this morning! I look closer as the fridge door closes. Oh no! My house is haunted... I need to get ghost busters on the line but then aha! I see it. Lacey closed the door with her back paw and had a whole bunch of cheese pouches in her mouth. She was laying them out on the table! What the heck? I saw her little behind running to her room and getting a Petco shopping bag. I had never seen that before. Is there something inside? She puts her little head in the bag and starts taking stuff out with her mouth. Some little martini cups, mini colorful plates, catnip and a bottle… The bottle said “Meowtini” She set everything up and turned on the T.V to a channel called “KTV” a.k.a Kitty Television. There were a whole bunch of music videos playing with cats meowing! What was this? I have never seen something like this ever. Was I paying for this without my own knowledge? Oh man she is grounded.

I hear the doorbell ring and I see Lacey running wildly to the door. I see at least a dozen cats at the door. How did Lacey meet these cats? She’s an indoor cat and always refused to come outside in the backyard with me. They all came in and started drinking their meowtinis and dancing their little tails off. One cat even had some shades on. “I think I’m dreaming” I say to myself. There was no way this could possibly be happening. Three hours later after they destroyed the living room with litter again and ate most of Lacey’s food they all seemed a little kitty drunk and were swaying as they were leaving. Lacey licks one of them goodbye and off it goes. Does Lacey have a kitty lover? How do I not know my own cat!

I see Lacey take out a mini vacuum that I didn’t know existed and she started cleaning all the litter and throwing her party favors in the Petco bag. Where is this secret hiding spot of hers? Would anyone believe me if I told them this? Probably not. Wow, so this is how Lacey’s food always ran out so fast. There were so many questions in my head. I couldn’t really think straight. Why was the video fading off?

I woke up at my desk and realized I had fallen asleep. I had a sugar rush that seemed to make me crash. I look at the screen and see Lacey sleeping on the couch. I laugh at myself. What in the world was I even thinking? A cat having a party. I finish up my work and head home. I see Lacey now sleeping on the floor. “Hi my baby. How was your day?” I say to her as she runs over to greet me. I give her all the kisses she will allow and go to get her dinner ready. I see something shiny on the floor under the dinner table… What’s that? I go over to get a better look. A mini cup that looked familiar. It was one of the cups I saw being pulled out from the Petco bag for those little “meowtini's” and it was left behind…I look at Lacey as she looks at me with her big green eyes and we both wonder the same thing... “Does she know?”

More stories from writers in Petlife and other communities.