Why Bruce Lee is such an enduring icon, at least to me, the greatest...you'll love this one!

by Kajosway and The Natural Overflow 5 days ago in celebrities

You want to get psyched? read on! Be prepared, it is a deep tunnel this one! You will bump into people like LL Cool J, The Wu Tang Clan, Kevin Eastman and Peter Laird the creators of the Teenage Mutant Ninja Turtles and Mike Vallely a pro wrestler and pro skater that printed Bruce Lee illustrations on the back of his boards. I hope you don't mind. 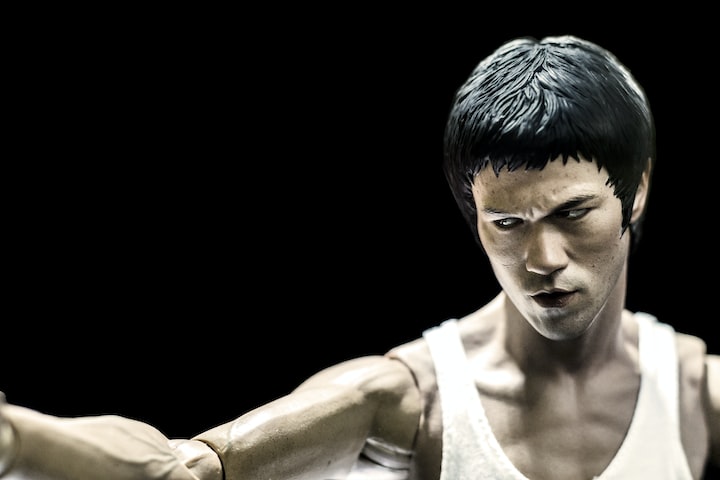 Photo by Fervent Jan on Unsplash

So, why Bruce Lee? Was he a saint? A prophet? A genius of some kind? Bruce wasn't a saint, I am sure of it, it is possible that he cheated on his wife, just as it is possible that he was a model husband, it is possible that he never did drugs, or it is possible that he did cocaine regularly in Hollywood parties, after all, if I understand correctly, he was quite a bad boy as a kid and adolescent. Did he really win the fight with Wong Jack Man? Was he really such an unbeatable fighter? or was it all just hype? He studied philosophy, but was he actually a solid, quality philosopher? I have no idea. And it doesn't matter, because whatever the medium, the message of Bruce's life impacted me and innumerable other people on earth in such a positive way that whatever the actual truth, it doesn't change the essence and power of the moral, cultural and philosophical relevance of his brief, well lived life.

He definitely was outstanding in some sort of way that crossed and transcended the intellectual, the physical, the athletic, the creative, the psychological planes...he was a legit cultural phenomenon in his own right.

The reason I say this is because I want to make clear that I never met Bruce Lee or anyone who met him, so I don't know anything for sure about him, all I know is whatever I got from books, articles, movies, documentaries and from his daughter's podcast, the Bruce Lee podcast, that I recommend to anyone. Oh and also from my own imagination.

Speaking of imagination, check here how good at drawing Bruce was!!

Bruce Lee drew amazingly, as you can see, I must admit that as someone who draws myself I can't help but be impressed. He was also an excellent dancer, he had impeccable sense of style, he also fancied himself to be a bit of a barber/haircutter, which is funny, considering that he was discovered by a Hollywood hairdresser and that cutting hair is actually my profession.

God knows how obsessed I have been with his haircut over the years, LOL. When I was younger I actually wanted to look like him, I wanted to have the same haircut and the same physique, and the charisma and body movement... Yes as I write this I realize how foolish that was, especially the haircut. I mean it looked great on him, but it was a simple bowl haircut. It would have probably not suited me at all. Also, associating him to that haircut means assuming that he would have never had any other hairstyle had he stayed alive. I don't know, maybe he would have grown his hair to his shoulders later in life, or rocked a mullet at some point in the 80ies maybe, can you imagine that? Anyway, I digress, point is...

I am not surprised that an aesthetically savvy and philosophically inclined mind like his could come up with quotes like this one here. A beautiful poetic quote about anxiety and authenticity:

“Thinking is rehearsing in fantasy for the role you have to play to society. And when it comes to the moment of performance, and you’re not sure whether your performance will be well received, then you get stage fright.” -Bruce Lee

The following is a lovely episode from Shannon Lee's podcast on Bruce (she is his daughter), that I happen to have been listening to earlier today. I mean, just read the things Bruce wrote on his journals here, how can you not love him for that!

My idea of Bruce Lee could be inflated or distorted, but it doesn't matter, the impact this man had on me throughout my life is monumental. The truth is that probably I always secretly wanted to be him, as I mentioned. Yeah not merely like him, but actually him, Bruce Lee reborn, a kick ass fighter, athlete, philosopher, writer, artist, actor, sex symbol, pro active creative soul, lover of women, enthusiastic liver of life and, at some point in the future, a passionate, loving husband and a hero of a father that my children would be proud of and look up to (and also I wanted by extension my family and friends to be proud of me, not merely for the validation I would feel, but mostly for the good feeling that knowing such a great person like me, being the legend that I would be as Bruce Lee reborn, would give them...I know, what a LOL worthy ego trip).

In his short life he managed to leave such a mark on the world, from north to south, from far east to far west. It is surprising to me that a religion around his figure hasn't sprouted anywhere yet. His accomplishments are so remarkable, so transcendental, beyond culture or gender or race, trans generational, trans geographical, so beyond his role in life as a father, martial arts teacher and actor.

You see, as I write this I see how ridiculous it seems, but whatever it is that he left behind, it is magic, and that is baffling and mind bending to me! Bruce Lee went from being a person, to being a symbol in not many years. How this happened is beyond anybody's comprehension!

And yet, here we are, 48 years after his death, still talking about him, still passing around his quotes, still making life changing decisions based on his example, still reading the Tao Te Ching because he quoted it, still wanting to go visit China because he was Chinese, still buying skateboards and T-shirts because they have an illustration depicting him in some kick ass pose. He is a meme, he is an Archetype, he is a symbol of something for so many people, young and old, for fighting practitioners, for athletes, for artists, for musicians, for geeks and nerds, for Africans, for Americans, for Asians, for eastern-Europeans, for people from all walks of life.

Fun fact, at some point, there was a statue of Bruce Lee in a random park in a city in Bosnia And Herzegovina, Mostar. What would Bruce represent to a bunch of Herzegovinians in a post war torn city in the middle of the Balkans? That is how big he is!

Another fun fact. Kevin Eastman Peter Laird, the two creators of the Teenage Mutant Ninja Turtles, shared how their idea for the iconic comics came about. Kevin was a huge Bruce Lee fan, so, believe it or not, him and Peter asked themselves, just for fun, what would be the silliest, slowest animal they could draw Bruce Lee as. They decided that it would be a turtle, so one of them made the first ever sketch of an anthropomorphic Turtle holding nunchacks in a Bruce Lee pose. And that is the story of how the first drawing of Michelangelo came about and how the TMNT concept for the comic series was born. After that, they drew the other three turtles, Master Splinter, the Shredder and...and from there the rest is history. How amazing is that!?

Oh and shall we glide on how a lot of the early Hip Hop artists got inspired by Bruce Lee? We might not have had an LL Cool J or a Wu Tang Clan if it wasn't for Bruce. Skateboarders got inspired by Bruce, like Mike Valley. And who knows how many people decided to become psychologists and coaches and how many people benefited from that, thanks to Lee.

Under the heavens, under the sky, there is but one family. - Bruce Lee

He left such an indelible mark with his life, that it makes me wanna cry almost to think how little I have done with mine in comparison. He wouldn't approve of self pity and envy of someone else's achievements and also he wouldn't approve of anyone imitating him, he thought everyone should be real and honestly expressing themselves.

Also, just thinking about the mark he left living such a remarkable life, inspires me deeply and makes me feel like a little of his magic rubs off his life and falls sprinkling like seasoning onto mine and makes it a little more flavourful somehow, simply because I am having an experience of it through a cultural mean like a book, a movie or a podcast.

I know, cheesy, but what can I do. Check this documentary now!

Oh and by the way, what did he accomplish really, just a bunch of movies, martial arts schools, philosophical letters and journal entries, a book, or two, and a very diverse cult following because of his image and ideas. People who have done more than that are not as enthusiastically remembered by such a large number of people as he is.

He did what he did at the right time in history and he did it in the right way so that in his death it all was sealed into something legen...wait for it...dary. He is not great simply because of his frankly limited achievements, but because somehow he struck a chord with them , in the way he went about them, that kept resonating generation after generation, producing waves of inspiration in countless people who went on achieving stuff because of him.

And that is why he is an icon, and the greatest one to me.

I'll write more on Bruce Lee in the future, but for now, I will leave you with this quote:

“The ultimate aim of the artist is to lay hold of the art of living. Be a master of living, for the soul creates everything.” -Bruce Lee

So, moral of the story, don't be a robot, be Bruce Lee.

I am an actor, artist, poet, story enthusiast, musician, mover, meditator, philosopher and student/lover of women and life.

A haircutter by trade. Into personal development. Strong proponent of the "whole foods plant based" lifestyle. FTW

See all posts by Kajosway and The Natural Overflow →