Or, how to fit too many elephant metaphors into a 1,500-word article. 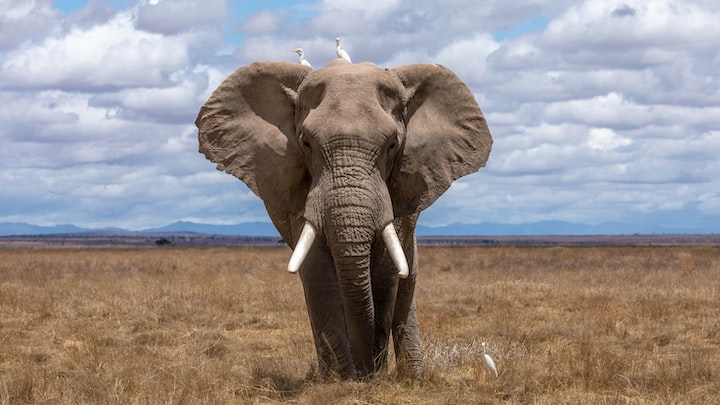 Photo by Nam Anh on Unsplash

Typing those two words in a Starbucks on December 22, 2022, lifted a burden from my shoulders. The story that latched onto my brain nearly two years ago finally had a home on my computer’s hard drive. Every character and every moment had been extracted from my gray matter and regurgitated in the form of a million messy keystrokes. That may sound gruesome, but writing is a violent art, and I emerged from battle that day sore, sweaty-fingered, and still alive.

But you’re not here to watch me wax poetic. You clicked on this article for one of two reasons:

ii) You want the bullet points.

“Cut the theatrics,” you mutter, scrolling down to find something useful, like an enumerated list or bold text. (You’re welcome.) “I have no use for your sentimentality. Divulge your novel-writing secrets in an orderly fashion so I can move on with my life.”

“Fine,” I respond, discreetly tapping the BACKSPACE key until my index finger bleeds. “I’ll just delete the last 1500 words of pedantic perfection. You’ll get your enumerated list, but I won’t stop being dramatic. You may take my lines, but you’ll never take my—”

1. Only eat one elephant at a time.

How do you eat an elephant? One bite at a time!

I have a couple dozen novels on my computer in various stages of completion. They range from simple premises and outlines to complex character breakdowns and halves/quarters/eighths/hundredths of first drafts, all of which I started in the last four years.

The story I just finished, The Ghost Tablet, is my second complete manuscript. The first has been languishing in query-letter purgatory for eighteen months with no parole in sight. We’ll get back to that.

I spent most of the last four years bouncing between projects like a Super Mario speedrunner. Since I started tracking my writing in late 2019, I’ve written 358,831 words (give or take). Only twice in my life have I narrowed my focus to a single writing project – spring 2021 and fall 2022 – and each time, I came out with a finished first draft.

To revisit my uncouth metaphor, I set my sights on the biggest, juiciest elephant I could find and consumed it, bones and all. There was room for the occasional appetizer – I’ve written several short stories on Vocal and won a few small prizes – but the elephant was my entrée.

If you enjoy misusing literary metaphors (as we all should), this elephant was my white whale. And though neither of my finished first drafts are perfect (see #5), I’m very proud of my work. Even now, I’m scouring the selection that sits my elephant cellar as I plan my next dinner.

Yeech. I’m retiring this metaphor. On to the next.

Theoretically, a female rabbit can birth up to eighty-four smaller, younger rabbits each year. And just like that, the animals have wormed (ha) their way back into this narrative. Don’t worry, we’re not eating anything in this section – I just wanted to use the rhyme.

Habit-forming is its own industry. I’ve read the Covey books and the anti-distraction manuals designed to facilitate Your Best Life Now (although I haven’t read that one). I don’t have the research or the sociological qualifications to tell you how to set up a routine.

What I can tell you is that when you make writing a habit, you write more. I know, genius!

When writing my first full manuscript, Gravity Girl, I eked out 10,000 words in the first ten months. Not great. But when I set aside a dedicated writing time for myself – in my case, half an hour in the mornings before my wife wakes up – everything changed. In five months, I wrote 85,000 words, most of which came in sprints of 800 or less.

No steroids, no vitamins, no diet. Just dedicated time. Was it easy? No. Was it effective? Definitely. And the longer I kept the habit going, the easier it became to get up, take a walk, shower, and settle down on the couch with my laptop. Starting a habit then meant that I didn’t have to start a habit later.

Some people like hot beverages, sunlight, or comfy chairs to help them write. If that’s what helps, more power to you! For me, an outline works better than any stimulant.

3. The outline is your friend, even when you smash it to bits.

The debate of plotting vs. “pantsing” has raged across the Internet for years, or decades, or something like that. In their strongest stereotypes, plotters chart every minute detail of their story’s arc in advance, while pantsers – the daredevils of drafting, in my opinion – put pen to page without concern for such trivialities as knowing what comes next. If you find my description of your chosen camp uncharitable, just know that this is how the other half sees you.

Allow me to present, if not the answer, then an answer:

I’m not even going to touch pantsing because the idea of just sitting down and writing has always given me shabby prose and weak storylines. My first attempt at a pantsed novel, The Key, ended at 32,000 words, just after I’d introduced a secret bunker filled with robots into my post-apocalyptic wasteland. ROBOTS. Come on.

For The Ghost Tablet, I spent a lot of time on the details before I started writing. I’d made a chiastic structure diagram, a character list, a scene breakdown, and a chapter list with approximate word counts. I was well-prepared and well on my way to a fantastic novel.

Then I had to write it.

No plan survives first contact with the enemy, and my battle lines broke under the twin onslaughts of story craft and self-doubt. But my outline bolstered me through the fray because of one simple idea: I knew where I was going. And as long as I knew my destination, I could finagle a path through the carnage.

Each chapter had to end somewhere, which meant it had to start somewhere else. Even as new beginnings and endings popped up, I prepared my idioms, rolled with the punches, and crossed those bridges when I got to them. The structure I’d set for myself was there for me. To follow or to deviate was my choice, but either way, I had something to choose.

Forty-six chapters became fifty-one. 80,500 words became 100,000. But I reached the glorious end with my head held high and proclaimed to the world, “Hey, I did it.”

Things changed. Things always change. But I finished the draft.

My handy-dandy writing tracker has been my salvation during the drafting process. Most profoundly, I can look back and see the sheer immense weight of the words I’ve written since December 28, 2019. Many of those words belong to incomplete projects. As of last week, 100,139 do not.

I set goals for myself – e.g., finish the novel – but they were much more flexible. I wanted to write at a rate of 1,000 words per hour, and most of the time I managed to do so. But even when I only typed eighty useless words in fifteen minutes of screen-staring time, it was okay, because I’d also set my limits.

My habitual writing time goes like this: I plop down wherever I want to write and set a timer on my watch for thirty-one minutes (because time is an illusion, right?). Then I write until the timer goes off. That’s it.

Will that work for you? Dunno. But I found the system that worked for me, and it was about dedicating time to the process. The words will come if you spend enough time coaxing them out.

If Excel spreadsheets are your jam, you can download this free one I made for Excel or Google Sheets. It also includes a few Instagram story templates I made for #authorswrapped, which HAS to catch on eventually, but the important part is the tracker. After a month of writing, it’ll look kind of like this:

You can filter by date, amount of time, story, word count, and more. The above image shows what I wrote in December, when I was absolutely dying to expel the last micrograms of story from my system. By the last day, I was sitting in Starbucks, fueled by a Vanilla Sweet Cream Cold Brew (grande, light ice) as I begged my trembling fingers to type faster. That’s a nice, stressful memory I can revisit whenever I look at my tracker.

5. Save the edit for the edit.

I’m particularly horrible at this one, but who said I was a model writer? You’re the one who clicked the link.

I’ll keep it short. (“Sure,” you say, raising a skeptical eyebrow. No, seriously.)

If you’re like me, you want to go back and make that chapter/scene/beat perfect before you move on. Don’t do it, for multiple reasons. Cue the enumerated sub-list:

i) Your energy is better spent making the story happen.

ii) You’ll see it more clearly in a week (or six) than you do right now.

iii) You can pay someone to do a much better job.

You got your lists and your bOlD tExT. Happy now?

In all honesty, I loved the writing process. It was exhilarating, educational, and immensely fulfilling. What comes next – editing, pitching, publishing (or self-publishing), marketing, and so on – belongs in another article. Perhaps one written by an author with that je ne sais quoi sometimes known as “qualifications.”

Now, if you’ll excuse me, I have an elephant to cook.

I love fantasy epics, action thrillers, and those blurbs about farmers on boxes of organic mac and cheese. I live in Orlando, FL with my wife, two temperamental avocado trees, and the World's Cutest Puppy™.

More stories from Addison Horner and writers in Motivation and other communities.