by Sonya Scott 2 months ago in healing

Is there really a way to turn money into gold? 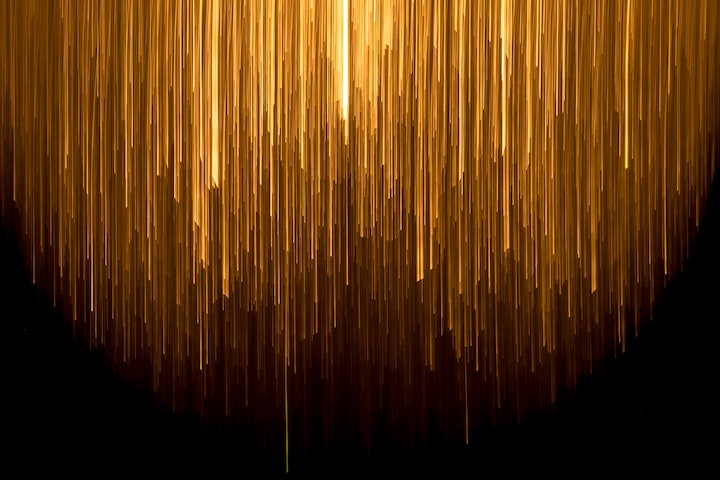 Photo by Rene Böhmer on Unsplash

There was a window and above the windowpane on the wall wrote FAKE WINDOW in thick black letters. THE SCENERY IS FILM. I looked around at my other two options: an old wooden, cracked door with a black X on the frame and another door adjacent from the last was just as old and stained from dirt, but padlocked. If I take the door with the X would I be leading myself astray?

If I attempt my chances to unlock that door what would I find? Is it locked to keep me out or something in? So I looked at the window, its lack of luster telling me all too well it was just a piece of plastic film with a nice scenery on it. There was really no need for the words above to tell me that. I peeled it away. Another piece of film lied underneath it. I peeled back that layer…again the same story. Over and over, peeling the vast pile of film back became my mission.

Then the real light bled through. Under layers of illusion I found truth. I broke the window and escaped out. There did not seem to be anymore obstacles ahead of me. Locked gates that came up were scaled with ease. Consumed by emotions of freedom and relief, the emotions fueled each step with increasing urgency, hoping to rescue myself from my own torment. As I found myself caught between a run and a jog, I came upon a little black leather book resting upon a stump. Glowing light surrounded the little book, more inviting than frightening. I hoped it could help my situation. Immediately flipping open the leather bound book with little reservation, I found myself being drawn into it by a force stronger than gravity. Flashing lights and different places whirred by me in the portal as I fell.

Lights and sound overwhelmed the senses as interpretation of the stimuli remained confusing. It was not until I heard the voice did my voyage come to stability.

“Play a game, any game,” a tall man in a light tan suit said with a twinkle in his eye, his wiry white hair bouncing as he moved. It was clear he was some sort of game master. Near him I spotted the spin style Lucky Lotto Wheel. Seeing the wheel catch my eye, the game master walked over and patted it.

“This wheel here,” he said, “is for the brave. You have a chance to make your wildest dreams a reality, but the way that your riches materialize won’t be how it meets the eye.”

I wanted to spin it though. The Gamemaster stood aside and said, “By all means it's your choice,” as I walked up to the wheel to spin it. Grabbing hold, I pushed it forward and released it. The wheel spun at least five or six times before coming to rest. Jackpot! I thought, I got $20,000 dollars!

“We have a winner!” The game master shouted with fervor. An unseen crowd began cheering. Camera flashes dominated the place now, each shot fueling an escalation of grandeur. Visions of a better life passed over my eyes. I saw myself with the farm I always dreamt of…a few tiny acres that would be my own. This was the type of freedom I had been looking for. “Would you like the chance to double your pleasures? If you spin again and you don’t win you can lose it all.”

Snapping out of my daydream, I decided to test my luck once again. As I watched the wheel leave my hands, I began to sweat as it turned. The wheel slowed to its final position on zero…

Suddenly I woke up in my bed. I sat up and at the end of my bed was the game master. He was sitting in my brown wooden chair with his right leg crossed over his left. Dressed in the same tan suit from my dream, I saw the little black book I remembered opening sitting on his lap.

“Who are you?” I asked not from fear, but more out of interest than anything.

“Why I’m your fairy godfather,” he answered in a very warm tone.

“Wow…am I still dreaming?” I said out loud.

“Why are you here? What’s this all about?” I asked.

“I’ve come to teach you the basics of alchemy my dear,” he said with an enduring smile.

“Alchemy? What’s that have to do with any of this?”

“It has a very much do with everything,” he said with conviction. “You should understand that what you experienced wasn’t just a dream, but a part of you that is a hidden facet. Through what you call a dream you were able to discover a large reservoir of your own internal power. With this power you can take ordinary experiences and transform them into something of value.”

“So if this was real…I really did win $20,000 and lost it all in one go?” I said with dismay. “I’m always making the wrong choices.” I started to berate myself internally. Something rare like a fairy godfather comes along with the power to bestow great wealth and in a heart beat I squander it to the throes of risk-laden chance.

The fairy godfather seemed to know what I was thinking. “See now,” he said, “the course of your actions could have went one way or another. However, I am here to enlighten you on the lesson to be gained, regardless of what course of action you would have chose. Now we are here and the choices made cannot be undone. You discovered self freedom from becoming aware of the prison of illusions that your own mind created. This kept a lot of your inner power down and away from where you can access it, so this new found self awareness walks you into your power that is needed to bring forth transmutation.”

“Your inner power the key element and your actions also led you to me you to me of your own free will by opening my token up,” he patted his little black book. “Of course you made a choice that doesn’t seem that profitable to you. You did make some correct choices. Wisdom, for example, is created usually from doing the wrong thing so this is where that course of alchemy comes into play when you won and lost $20,000.”

“However, your loss turned to wisdom…and that turned to gold. It’s not a treasure you can physically hold, but a unique gift that is yours alone. With this gold you can use it to make your life more wholesome and sometimes that’s worth more than any real monetary value. So you think you lose, living under the black cloud of the misfortune you created for yourself; perhaps you can see that no matter what you always win and live in the illumination of your inner light.”

“This allowed some parts of you to shine brighter. It’s the simple lessons of alchemy…you take something in you that doesn’t feel agreeable and you use your inner power to transmute it into light or into gold. Or perhaps whatever silly thing in your world that you humans perceive of value that I can use to teach you. I know you understand now so it’s time for me to go.”

He began to shimmer and fade away into the particles of sunlight that was coming through my window. I laid back down in bed reflecting back on everything that was said. The lessons gifted to me regarding my own subterranean energies I knew now could not be given a price. Though the $20,000 could be seen as a loss, now it seemed to be a payment for the priceless ability learned. To know how to channel the inner self for transmutations in the real world was priceless and now would foster being able to bring not only changes, but changes with the desired outcome. The scenery was no longer film because I now was the director in my own story…a living philosopher stone turning chaos into gold.