The trouble with goals

by Sheryl Garratt 2 months ago in goals
Report Story

Why those New Year Resolutions and goals lists rarely work. And what to try instead. 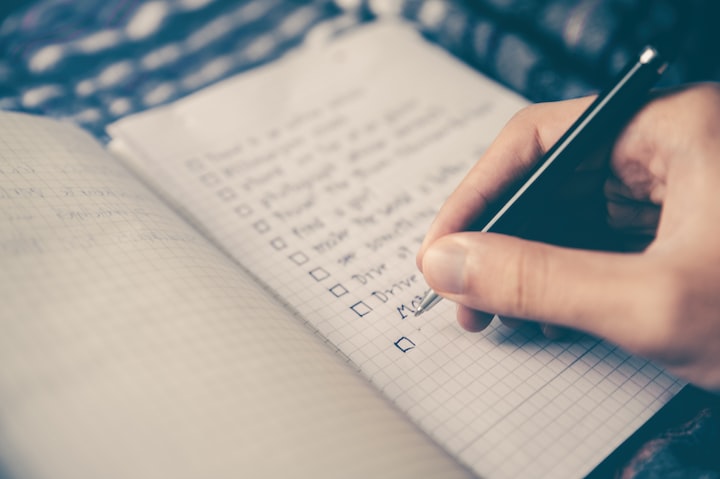 When I trained as a life coach, it was all about goals.

Setting them. Attaining them. Then setting some more, in a relentless cycle of achievement. This is effective for some people, and it's certainly better than bumbling aimlessly through life with no direction at all.

But the trouble with goals is that they’re all about the end point, not the journey.

I noticed that achieving their goals wasn’t making my clients happy in their daily lives. Indeed, they would often talk about happiness as something that had to be earned, or deferred until they got below a certain weight/earned £100k/got a top 10 single/achieved a million followers on Instagram/finished their novel/whatever the latest goal was.

When they did reach these goals, they’d enjoy a brief celebration before setting new, bigger goals and starting the striving all over again.

It all seemed a bit joyless. They weren’t enjoying the process: the weeks, months or even years it took to get where they wanted to go. And surely that’s the point?

Goals are often external and arbitrary.

Fixating on a specific figure rarely makes sense to me. Why would life be significantly better if you earned £100k rather than £99k? Why would you be happier or different as a size 8 rather than a 10, 12, or indeed 20? And what use is a huge social media following if it doesn’t result in authentic connection, real fans or sales?

Goals also often focus on faults and flaws that need to be fixed. There is nothing wrong wanting to make changes, or with being ambitious and wanting more. But deep change starts with loving and accepting yourself as you are, then building on that. Not with constantly pushing and critiquing and telling yourself you can’t rest, be happy or be satisfied with your life until you’ve passed some new milestone of achievement or self-improvement.

Despite all my training, goal-setting wasn’t working for me, either. Every January, I’d write out lots of grand resolutions that were just about attainable in a year. Yet by December, I’d have achieved very few of them.

They were too big and overwhelming. They were often things I felt I should do, rather than my real heart’s desires. And for me the dark, cold January nights in the UK have never felt the right time for a fresh start.

I now plan out my year after my birthday in March, when spring is in the air and I’m feeling much more rested and energetic. For me, January and February are a time for rest and renewal, for early nights and curling up with a good book rather than launching new ventures.

If you start January motivated and ready, go for it. If not, choose a time that makes sense to you, and reset then: the start of the financial year in April or the academic year in September; your birthday; or some other marker that’s right for you.

Instead of setting targets and dates, I start by getting clear on the life I really want, creating a powerful vision of my future, of my ideal life. (If you want some of the questions I use, sign up for my free writing prompts.)

I also like to imagine looking back on my life, as it nears its end. At the age of 100, what will I most regret not doing or trying? What will I wish I’d done more of? And less of?

Once I have a clear vision of the future I want, and what’s really important to me, I ask some questions:

I end up with goals and intentions that come much more from the heart and soul than the head.

Spending precious time with my elderly mum and making sure I have meaningful time with my son were never things that figured in my old lists of grand goals, for instance. But they are key to me now, and I plan my year around them.

These goals are different.

These more organic intentions rarely have numbers attached. They’re not about striving to pass rigid milestones by certain dates, and feeling like you’ve failed if you don’t get there. Or if you do get there, immediately setting new goals to strive for.

These days, I’m more interested in attaining financial freedom than on hitting an exact annual earnings target. On feeling fit, healthy and full of energy rather than getting to a set weight or dress size. On having a regular creative practice that moves me forward, rather than counting only the output.

Focus on what you do daily.

If you focus on who you need to become to get there, on the habits and routines you need to build, the bigger goals tend to take care of themselves.

For years, ‘Write a new book’ was on my annual list of resolutions, for instance. And I’d kid myself I was still going to do it right up to November, when thousands of people draft out a book in the annual NaNoWriMo event. But I never did. Mainly because I didn’t schedule in regular time to work on it. Or even to think about it. (Even in November.)

Writing has always been a part of my life, and it is always a part of any ideal future I imagine for myself. Yet I wasn’t doing it in an organised way. So instead of setting the same goal again, I asked a question: Who do I need to become, to produce more books?

The answer was pretty obvious.

I needed to become someone who writes, every day. So I built habits and routines to support that, found groups and connected with friends who would hold me accountable, and started experimenting on what worked for me.

Then I focussed my efforts not on finishing a book but on simply showing up every morning and writing for at least an hour.

This year, I’ve written a book. I’ve also produced a weekly blog post at The Creative Life, and 26 issues of my newsletter for creatives, The Creative Companion. There were features for newspapers and magazines, and I contributed chapters to several books. And it all came from writing almost every day, from 8am-9am.

Often I do more, but rarely less.

There’s no decision-making involved, no dithering or procrastination. At 8am every day, I sit down to write. It’s just what I do now, who I am.

This isn’t always fun. There are mornings when I’d rather stay in bed, when the words just won’t come, when I don’t feel like it. But I also get a quiet contentment from writing regularly, from consistently doing the thing that makes me feel more.. me.

Even on a bad day, it feels a lot better than procrastination. And I know that better writing days will come, if I just keep showing up, morning after morning.

Sometimes I just can't get out of bed or I have an early train to catch, and that’s OK too. Not writing a book, year after year, felt like a massive failure. Not writing for one day feels much less catastrophic. I just pick it up again the day after, and carry on.

This is how to achieve the future you want.

You think about who you need to become, then you put habits and routines in place to create that.

Want to run a marathon? Start with a short daily run – or even a walk, if you haven’t exercised in a while.

Want to play Coachella or Glastonbury? Send your press pack to five new venues or booking agents every week, to get more gigs. Approach a new publication every week, to raise your profile. Or if you're not that far along yet, just form a band, and start rehearsing regularly.

Want to lose weight, permanently? Swap one unhealthy habit for a better one: replacing sugary canned drinks with water, for instance. Then, when that comes naturally, add something else.

Want to earn more money from your work? Block out regular time to pitch ideas, make proposals, approach new retailers, clients, galleries. Or experiment with a new income stream every month or quarter.

Focus on what you do with your days, and the years take care of themselves.

Sheryl Garratt is a former editor of The Face and Observer magazines, and has written professionally for more than 30 years. She is also a coach working with creatives of all kinds. Find her at thecreativelife.net

More stories from Sheryl Garratt and writers in Motivation and other communities.