Take the Infinite Approach to Your Work and Your Future

by Keri Mangis 7 months ago in success
Report Story 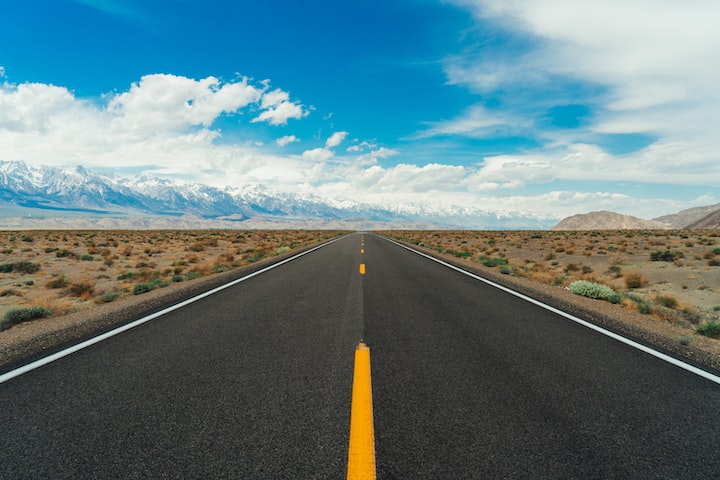 Photo by Meriç Dağlı on Unsplash

Life is An Illusion

“Hey kids, do you see that puddle of water on the road ahead of us?” my dad asked as my family traveled the North Dakota highways on a bright, sunny day.

My two younger brothers in I, crammed together in the backseat, shifted our attention from picking on each other to looking out the windshield.

“Yes!” we exclaimed. “What will we do when we get there? Will we have to go around it?”

“You’ll have to wait and see,” my dad replied, probably satisfied as we were now thoroughly focused on watching a mirage appear and disappear on the road instead of on each other.

Of course, that puddle never materialized.

As I look back and reflect on what I’ve done in my work life so far, and consider changes as to where I’m going, this puddle-mirage is an apt metaphor. I‘ve set goals in the past, but most of them have turned into nothing but a mirage—something I pictured ahead of me, but didn’t materialize in that same form.

Has anything ever arrived as I imagined it from a distance? Maybe? Maybe not? The goals I’ve set have either arrived without my truly recognizing them, or they arrived in such a completely different form I didn’t know to celebrate them until they were already in my rearview mirror.

My creator and entrepreneur path has been a windy, unexpected path. Even in doing something as concrete as publishing a book, it was hard to know exactly when my goal was accomplished. Was it when I received my first review? The first sale? The actual publication date? My book launch party? Now that I’ve lived it, and can look back, it was more a process that continued to unfold. One day, there was a puddle of water ahead of me, the next it was in my rearview mirror, and I don’t really recall splashing in the puddle. When is a flower fully bloomed? When does the sun fully set? Have you ever actually witnessed a single petal begin the process of dying? What’s the moment of life and death, of beginning and end, of dark changing to light?

Business—and life—is a series of continuous transitions, circular in nature rather than linear. We don’t exist in the stop-and-start, on-and-off way we often imagine we do. I think this is why checklists and other left-brained organizing tools have never become important tools of mine—at least, not more important than the leads of my intuition and curiosity. It’s why I resist writing business plans, and even budgets. I dislike being pinned down to some arbitrary goal that will probably change as soon as I look away and come back to find it. Like the night sky, I’m shifting, imperceptibly, all the time—sometimes consciously, sometimes not.

Whether it’s in a relationship with others or with our creative work, we are always in transition. We never arrive. It’s only in looking back do you see how much you’ve changed. Only then that you wonder how much direction you’ve actually had over your life, or if it’s all been only an illusion. At some point, we need to wake to the realization that the concept of “arrival”—the puddle—was nothing but an illusion.

“Infinite-minded leaders understand that “best” is not a permanent state. Instead, they strive to be “better.” “Better” suggests a journey of constant improvement and makes us feel like we are being invited to contribute our talents and energies to make progress in that journey.”

I’m not a kid anymore, metaphorically or literally. I’m done falling for the puddle mirage. I’ve seen enough to know that this approach to work (and to life) is not for me.

According to Simon Sinek in his book, The Infinite Game, there are two main approaches we take to our work: finite and infinite.

A finite approach includes doing such “practical” things as setting specific goals and playing to win. It puts our business on a game field where there can only be one winner and one desired outcome. Making lots of money, driving the competition out of business, perpetual growth at all costs—these are the words of this approach.

“One’s a dog-eat-dog world, and the other one’s just the opposite.”

This approach is reactive to trends, short-lived in its viewpoint, and can create antagonistic, zero-sum relationships with competitors. Satisfaction, when it does come, is also short-lived and never quite as sweet as we hoped. After all, the “puddle” has just moved out that much farther now.

An infinite approach, on the other hand, is marked by taking a longer-term view at what where we want to go and who we want to be. Do we want to influence? Are we creating a body of work that can outlast current trends? What kinds of relationships are we seeking in the world, and can we find ways to work with others in symbiotic, collectively beneficial ways? Partnerships, collaboration, building trust, forming community—these are the words of an infinite approach.

A friend of mine once told me that she and her family like to play “Infinite Monopoly.” The goal is to keep everybody thriving, paying their bills, and living their lives. Playing this way would mean resisting the urge to gobble up entire rows of property, and maybe even offering mercy to someone who lands on Broadway. In other words, it’s an anti-capitalist approach to the game that could be played ad infinitum.

In the past, I’ve always yearned to take an infinite approach, but occasionally get tangled in the capitalistic mindset that pushes me to think in finite terms. Not anymore. As I close some doors behind me and ask for new ones to open, I’m consciously choosing an infinite approach to my work (and to my life and relationships as well.)

The name of the game for me is sustenance and greater resilience—for myself and anyone who comes across my work. I want to create work that is deep and thoughtful, proactive, and impactful. I want to be keeping in mind not only the seekers of today, but the seekers of 10 years from now, 100 years from now, 1,000. I want to create work that matters in the big picture, even if it has less immediate reward. If I am going to reach puddles, I want them to be real.

I long to take the scenic, beautiful routes and skip the shortcuts (unless there are some great views!) I want to grow relationships out of meaning and connection, not convenience. I plan to let go of short-term goal setting and instead keep my gaze on the long, open highway in front of me.

Looking out the windshield of my future, I see a puddle on the road ahead, which represents the ideas of what I think I want. At least now I know that I’ll never ever reach it, as I play an infinite game of illusion.

More stories from Keri Mangis and writers in Motivation and other communities.