From Anxious Punk to Aspiring Monk: My Spiritual Awakening and the Music That Accompanied it

by Michael Howkins 4 months ago in healing 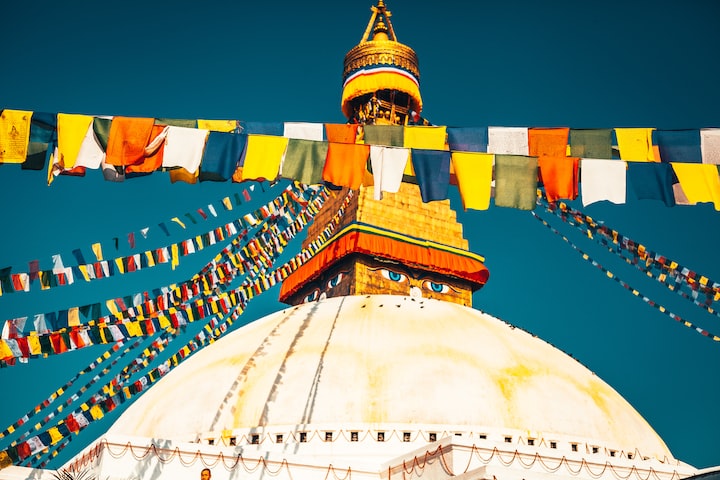 When I was in my late teens, I was a self-confessed punk, frequently drunk, and suffering from social anxiety. That was, pretty much, all there was to know about me. My identity was rooted in the music I listened to and the people I surrounded myself with. I drank because that's what everyone else did. I also drank to bury the feelings of insecurity and anxiety that were slowly building within me.

I played guitar in a couple of bands in a small town and if I wasn't playing music, I was drinking. When I drank it would usually end with me passing out in a bathtub, in someone's garden, or, occasionally, a parking lot.

Then one day, after living like this for some time, everything changed: I quit the band I was in, broke up with my girlfriend, and left my job. I didn't know what I was doing or why, I just knew I couldn't cope with the outside world anymore. I didn't realize it at the time, but I was being called inwards, and I was starting to listen.

For the next six months, I essentially became a recluse and stayed in my room in my parents' basement. I would only venture out at night when no one else was around. I stopped reaching out to my friends and my social life evaporated like water droplets under a desert sun. I became more socially anxious and slipped into a long and heavy depression. I even began contemplating suicide with severe regularity. No one in my family knew how bad it was, but they could clearly see that I was not myself.

My parents suggested that I fly to the UK (where I was born), to spend some time with family, and to get in touch with my roots - as it were. A month or two later I was on a plane to England with no plan, no motivation, and with my identity hanging on by a thread.

One afternoon, shortly after my arrival, I decided to take a stroll and explore my new surroundings. During this walk, I noticed a small Tibetan shop selling books, trinkets, and other Buddhist paraphernalia. I knew virtually nothing about Buddhism, but I felt inexplicably attracted to whatever I saw in the window and so I went in to check it out. A short while later I emerged holding a book, The Art of Happiness by the Dalai Lama. The decision to enter that store and purchase that book was the ostensible beginning of what has now become a lifelong journey.

I had arrived in the UK as a depressed and anxious person who had no spiritual inclinations or any interest in books, and as someone who only listened to one or two genres of music - most of it aggressive and depressing. Six months later I was flying back home to Canada as a completely different person. I was now a vegetarian that identified as a Buddhist. I was still socially anxious but no longer depressed. I developed a voracious reading habit and I was on a quest for peace, tranquility, and - the cliches to end all cliches - enlightenment.

I was officially a seeker, and my deep love for music was coming along for the ride.

That was 15 years ago. Since then, I've been on various meditation and yoga retreats. I've traveled through India, Nepal and, more recently, I spent over a year living in a small shepherd's hut in the highlands of Scotland. Throughout all of these experiences, my desire to live a more spiritual and zen-like existence has only grown stronger. And my taste in music intimately reflects this proclivity for peace and my expanded relationship with the rest of the world.

The music I typically listen to today is catered towards practices like pranayama, meditation, yoga, and qi gong. I'm attracted to sounds that originate from all over the globe and music that transcends the current values and attitudes of our modern age. But don't get me wrong, there is loads of great music being produced today and you'll find a lot of it on my various playlists.

But it has become harder for me to enjoy the fast, loud, and aggressive tones that used to fuel my days and nights - although I still have a soft spot for the occasional math-rock playlist. But there are just certain types of music that no longer make the cut for me, especially when I want to dive deep within.

So, does the music we listen to actually have an effect on our state of mind, our bodies, and our health?

Not all sounds are created equal

The Science of cymatics is the study of sound and vibration made visible. Put another way, cymatics looks at how sound affects physical matter. This is accomplished by playing frequencies through a medium such as water in a dish, or salt on a flat piece of metal.

As the frequencies emitted from the speaker change, whatever medium the sounds are being played through changes accordingly. The higher the frequency, the more complex the geometric pattern.

Why is this important?

As human beings, we are made up of mostly water. The music and sounds we listen to, and produce ourselves through speech, reverberate through us and influence the various structures in our bodies, our minds, and our emotions. For more information on this fascinating subject, the work of Dr. Masaru Emoto is a great place to start.

Today, thanks to advancements in technology, we have myriad ways to use sound as a tool for healing and spiritual development. There are solfeggio frequencies, binaural beats, and white noise. There is also an emerging modality known as Biofield Tuning which employs the use of tuning forks to balance the human biofield. And there are many others.

The therapeutic use of sound is not something that is strictly limited to the realm of alternative medicine either. For example, we use sound in hospitals today to destroy kidney stones (lithotripsy) and as a method of non-invasive surgery and diagnostic purposes (ultrasound).

In reality, our relationship with sound and our understanding of it is nothing new. In fact, the scientific world may only just be catching up. The ancients were well aware of the universal nature of sound and the role it plays, both in our physical and spiritual lives.

For eons, there have been forms of music and sound technologies specifically created for both spiritual and healing purposes, and it has manifested in various ways and in various cultures. In India, it has taken the form of kirtan, bhajans, and Japa meditation. There is a longstanding tradition of throat singing and the use of chimes, bowls, and gongs in Tibet. Native Americans and indigenous shamans are known for their use of ceremonial drumming. Similarly, the folk instruments of Asia, Africa, and the Middle East have been used to commune with the divine for millennia. Sound has been with us from the very beginning.

So it seems safe to say that we are not the first generation - nor civilization - to have 'playlists' for meditation, yoga, and, indeed, to help us reach zen-like states of awareness. Though we are probably the first with Spotify and the ability to carry 70 million songs around in our pockets.

Playlists for the seeker in 2021

So what exactly should one listen to today if they want to experience deeper levels of meditation, tranquility, or just escape life for a while? Naturally, the answer will vary depending on who is asking the question.

Some people may need Tibetan singing bowls, mantras, and spiritual invocations to get them into the right space.

Others may find that death metal and grindcore are just what the doctor ordered. Play at your own risk.

And some people like a little bit of everything in between.

The playlists I've created below are full of songs that take me deeper, higher, and further away from the world when times get tough. There is also music that engenders and evokes the elevated feelings of bliss and inner harmony - states of being I've learned to hold as sacred.

Here are four zen playlists that can help you temporarily escape our mundane reality, or as the Buddhists and Hindus call it Duhkha (suffering).

Zen one: breathe in

This first playlist is about letting go. It is a compilation of ambient drone, piano compositions, atmospheric IDM and minimalist tracks. The music on this playlist is great for going on a relaxing walk, soaking in the tub, or even some gentle stretching.

This playist places more emphasis on rhythm and groove. The music featured here is a little warmer, upbeat, and may coax you into a more energetic and active state of mind. It features various trip-hop, nu jazz, downtempo, electronica, and instrumental artists. If you ever wanted to know if you can feel 'zen' whilst vacuuming or doing the dishes, this playlist answers that question with a resounding and joyful yes.

The aim of this next playlist is to take you beyond our modern world and away from all of the stress associated with it. Most of the music on this list comes from another time and place. There are the hauntingly beautiful sounds of Armenian duduk, the guitar-like oud of the Middle East, the meditative strings of the Chinese guqin, the infamously colorful sitar of India, and a variety of other relaxing and culturally diverse sounds. This music is perfectly suited to sipping a contemplative cup of matcha; it also pairs well with journaling and makes great background music for perfecting your crow pose.

Zen four: joy, bliss, and beyond

It could easily be argued that all music is spiritual, even grindcore. But for me, this last playlist is what I turn to when I want to put myself in a transcendent, more heartfelt state. The tracks on this list are comprised of bhajans, kirtans, mantras, and chants. It is mostly made up of devotional music, prayers, and transcendental sound currents, and there is also some gentle ambient and music as well.

Some of the most euphoric and blissful moments of my life have occurred whilst singing or listing to this kind of music. If you ever get the chance to partake in congregational chanting, do it! It really has the transformative power to heal you in various ways. It can transport you beyond yourself and into emotional realms that you may not have yet experienced. This music is a gateway to bliss and ecstasy. It can be listened to anywhere at anytime, but the best way to experience it is with your undivided attention. When music becomes your meditation, magic happens.

Listening to music is a collaborative and creative act, for sound does not exist independently of the listener in an isolated state. Music is intangible, universal and it has the ability to blur the line between subject and object. When we listen to music with our entire being, we become one with the music we're listening to.

Music is also an invitation. If offers us a chance to change our moods, our emotions, our stories, and also ourselves. Much like that voice that called me inwards all those years ago, music can take us on incredible, paradigm-changing journeys and illuminate entirely new worlds. The sacred sound current is always present, we just have to learn how to listen.

Thanks for reading. If you liked this story, please leave a heart. If you feel like you've learned or gained something from this story and want to show your appreciation, tips are received with gratitude and appreciation. Thank you.

I am a writer and advocate for personal growth and spiritual development. My aim is to empower people through writing about my own experiences.

See all posts by Michael Howkins →