A Little Faith, A Whole Lot of Hope

by Nadine Louis about a year ago in goals
Report Story 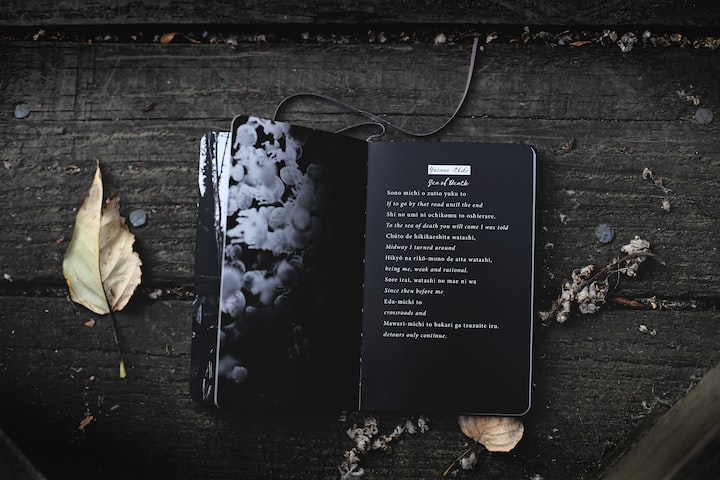 Photo by Ksenia Makagonova on Unsplash

Setting down the last of the moving boxes, I settle down on the mahogany floorboards. The last rays of daylight stream from the tall windows that span across the east wall, dancing across the floorboards as the sun lay its head to rest.

Ha, I laugh softly. I guess I did.

Slowly rising from the floor, I gaze around the room I’m in. A chandelier hangs from the high ceiling, its crystals glittering in the soft light. An empty fireplace with a brick façade awaits an ignited spark. A silent hallway leading to the rest of the house beckons for exploration. Boxes strewn across the floor, separated into haphazard piles.

My eyes settle on a box labeled ‘Miscellaneous’. That’s odd. I’m fairly certain I labeled everything specifically. The big block Sharpie letters piqued my curiosity. I crossed the expanse of the room, first turning on the lights. I grabbed the box, settled back onto the ground, this time my back facing the window. I rip open the tape with my new keys and peer inside the box.

It’s filled with notebooks. Well, that’s odd. Having transitioned to fully digital notes years ago, I’d thrown out many of my old notebooks. Shuffling through the spines, one black Moleskine notebook catches my attention. ‘MAKE IT HAPPEN’ was the title written across the spine. A smile spreads slowly across my face. I can’t believe I still have this.

It was a notebook I had bought after my first semester of college. At the start of the New Year, I filled it with random goals and dreams. I had written sporadically in it until the spring of my Junior year. I wonder how outlandish my goals were back then, I thought as I opened to the first page.

I am thankful that I am a pediatric doctor, making an impact in the world. I have millions of dollars, but it’s not just for me. I am able to give freely, to impact people’s lives and influence change. I host annual scholarships. I have created charities for children in the Caribbean and Latin America. I own my own home. I am bringing honor to my family. I am the first in my family to break curses of poverty and make a change. I am able to provide for my parents and my siblings. I am able to give so much, and it doesn’t hurt me. I love to give. I love to bring joy. I am an author. I have my own pediatric office. I am able to travel the world and explore its wonders. I can’t wait for what God has for me in this life.

Goosebumps emerged on my arms as I read the words. Wow, I say softly. I wrote this when I was 18. Twelve years later, I am living this reality.

How did this even become reality? Just a decade ago, I was living paycheck to paycheck. After paying bills, I spent most of my money on food and snacks.

I began to really reflect. I had always had high hopes and expectations throughout college. Even though I couldn’t quite see this luxurious life that I dreamt of, I knew I wanted it. I didn’t even really want it for myself. I wanted it for my family, for my siblings, for my future children. I wanted to break the generational curses of lack. I wanted to be able to give without feeling like I was losing anything. I loved giving, even when it left me with nothing for myself. I wanted to see my parents in the house that they dreamed of, with a huge kitchen for my mom, a music studio for my dad, and separate rooms for my little sisters. I wanted to earn money while I slept and give money to those who needed it without thinking of my bank balance. I wanted to travel and explore the world while having the capacity to help anyone I met. I wanted to help children medically and to inspire them to dream big.

I remember applying to so many scholarships throughout college. The first major one that I won was a $20,000 scholarship during my Junior year. $20,000 was such an unfathomable number for me back then. I remember the day I received that phone call: “Congratulations! You won our first-place prize of $20,000…” I didn’t hear anything after that. I was too shocked. Too amazed.

That sum of money was such an inspiration for me. Suddenly, it felt like I could really achieve my dream of becoming a doctor. I had worked throughout college because I knew my parents wouldn’t be able to pay for my tuition. Nor did I want them to. But Medical School tuition felt even more insurmountable. I wouldn’t get financial aid. How would I even get through the first year?

But to have a jumpstart of $20,000 to pay for my MCAT, for medical school interviews, for tuition? It was an amazing feeling. I was saving what I could from my bi-monthly paychecks, but it felt like those savings dried up by the time the next paycheck came. The $20,000 energized me. I worked harder than ever: picking up a second job yet again, taking summer courses to graduate a semester early, picking up extra shifts, applying for scholarships every day. I was determined to double that $20,000, triple it, quadruple it.

That was so painful but so worth it. Working two jobs while in school wasn’t new to me, but that last push in my final semester had a different energy behind it. It was like I had been ignited. The life-long dream of becoming a doctor was finally within my grasp. For the first time since starting college, I could see a future beyond the pre-med prerequisites and checklists. I saw a dream coming true. Being able to see that balance in my account week after week, growing even when I was giving, felt so empowering.

I continued working through medical school, authored books, and started my first $1,000 scholarship for Saint Lucian Young Women in my freshman year. I learned to invest and trade, paid off my student loans, started funding an account for my sisters’ college funds, and helped my parents find the perfect house.

I looked back at the little black book. All my aspirations were scrawled across the pages. I wrote about winning scholarships, graduating debt-free, buying, and owning my own house, and becoming a medical doctor. Every little thing I could imagine for my life was written right here. I had attached so much hope and anticipation to those words, dreamt of them, spoke them, saw them in my mind -- and they had finally come true.

Grabbing a pink pen from the bottom of the box, I began to put a checkmark next to the bullet-pointed goals. My heartbeat grew more erratic as I read each line. Check, Check… Oh wow! Check. I can’t believe I actually did this.

I flipped to the last page of the journal. “I am grateful for the $20,000 coming into my life this year. MAKE IT HAPPEN.” I pause. February 15th, 2021. That was the day I applied for the $20,000 scholarship. “Oh my God.” I pause and smile, looking once again at the boxes around me. A soft sigh escaped my lips. “It’s amazing what a little faith can do.”

More stories from writers in Motivation and other communities.