by JB 4 months ago in fact or fiction 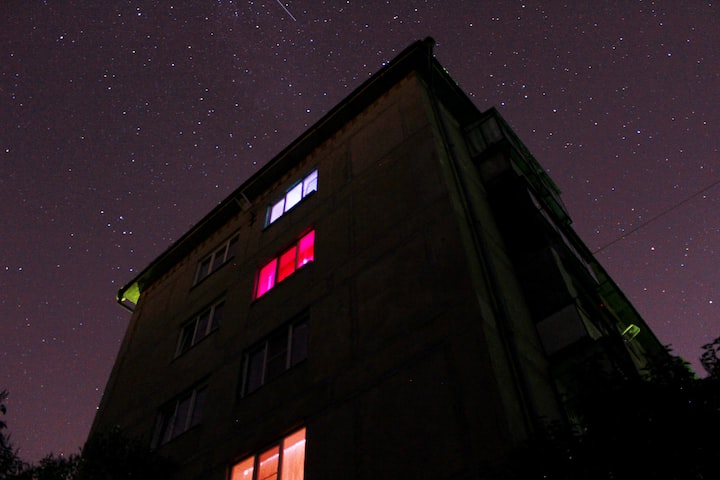 Photo by Prokhor Minin on Unsplash

Carmen wore a black oversized hoodie to be incognito and sped walked as swift as she could to avoid anyone she knew. The night was misty and cold dew periodically dripped from the trees and softly tapped the concrete. She contemplated about this night for a period of time. Uneasy about the process, she tried to remind herself of good consequences that could come from it. One thing she felt for sure was that she would feel better. From time to time she glanced around her environment to make sure she wasn’t being followed. Her appointment was any minute but reached just in time.

“You got tha’ money?” the woman asked. The woman looked like she was in her fifties and the gap between her two front teeth were wide enough to fit two quarters. She had an eye patch on he left eye but her right eye had heavy eyeliner, indigo colored mascara, and nude lipstick. The turban on her head wrapped around and mimicked a bun or what was a bun, the way it looked discombobulated. The way she popped her bubble gum was like popping bubble wrap; and she followed up smacking it around her mouth. Carmen almost felt scornful however she hoped her facial expressions weren’t too conspicuous. The room felt boxed in and the smell of sweaty sex reeked.

“Uh, yeah I have it”, Carmen replied.

After the woman counted the money, she put the money in her bra.

“Alright, go lay down. Take ya’ pants off but leave ya’ panties on”, she said. Carmen did exactly what the lady aforementioned. With just her thong left on, she laid on her stomach. In her peripheral vision, she saw the syringes and needles on the dresser with what appeared to be silicone in them along with dark liquor bottles that were halfway drunken from. Her heart palpitated out of nervousness and held on to the deflated pillow; or at least that’s how it felt. To self soothe, she inhaled but exhaled longer. The woman came over with a glass of liquor and swirled it around.

Carmen felt the warm and burning sensation on her throat and down her esophagus. She lay back down and continued to self soothe. With the woman’s clawing nails, she could hear her putting the syringes and needles together. Starting with the right buttock, she injected the silicone. It felt like stabbing darts and Carmen bawled immensely. She bit on the deflated pillow but it was evident it did not suffice. In her mind, she wanted to look perfect. Perfect meant looking more appealing in clothes, pictures, and even attracting men. Men never found her attractive because of her slender boxy physique. Although assimilating herself with weaves and simple nail extensions she was still not accepted. She enjoyed nerdy things like reading books and comics however she never found her niche. Many girls in her town had hourglass body shapes and their interests were polar opposite of hers. Every time she remembered crushing on a guy, he would always pursue a curvier girl with long hair. One thing she knew was that it was never a good feeling to always feel like a second option, or no option for that matter. Sometimes she would even get teased and constantly called a twig but that only scratched the surface.

The woman then penetrated Carmen’s left buttock with the needle. “Ahhhhhh Shit!” Carmen bawled once more. She desperately wanted the woman to stop but it was far too late at that point. The feeling of the stabbing darts came rushing right back and her cries became uncontrollable. She lost track of how much time had gone by because all she could think about was it being over and done with. When the woman finally finished, she placed cotton balls on the injected areas, bandaged Carmen up, and sent her on her merry way.

Carmen still felt severely sore after her operation and her butt swelled. Even taking a shower would feel like an impossible task from the pressure of the water hitting her. Every once in a while her butt would go numb. She woke up and noticed her breathing pattern became abnormal. Every time she coughed, there was blood on her hands. She rushed over to the bathroom sink and spat out more blood but darker than usual. When Carmen came to think of it, she never realized what the woman could have injected inside her nor did Carmen think to ask. Suddenly she felt something wet on the tile floor.

She grabbed her phone from the bedroom and dialed 911.