KB
by Karen Bouknight 11 days ago in garden

The Art of War - Garden Style 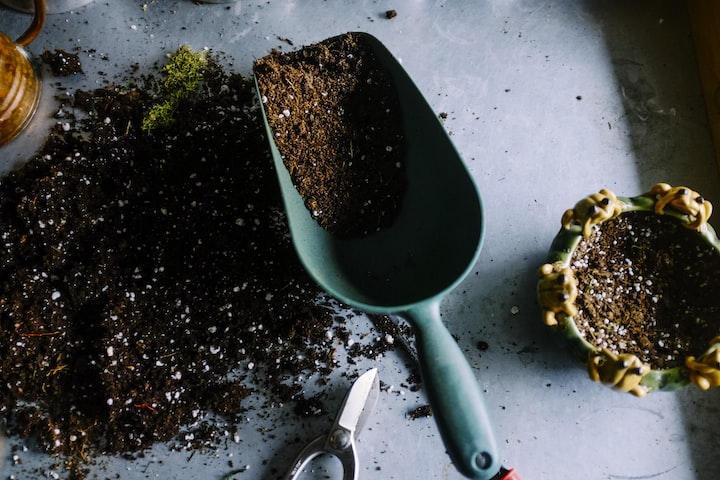 Photo by Neslihan Gunaydin on Unsplash

I once heard it said that happiness, or the lack thereof, is a state of contentment influenced by outside stimuli. Conversely, I have also heard it said that joy is a state of inner contentment or delight that resists outside influences. For example, I found that when I was outside working in my garden, I experienced happiness. When I discovered that the backyard groundhog (nicknamed “ground cow”) breached my fence and ravished my snap peas, I was unhappy. Obviously, this beast was not related to the well-behaved Punxsutawney Phil on the television. Truthfully, I was angry when my plants were invaded – but my joy for gardening remained. That inner joy was a sign of the creative life inside me. I have learned to enjoy that creative aspect manifested as the intersection of a woman and her dirt.

My love for the beautiful and practical garden did not start out instantly creative though. At first it was just seeing if these things called “seeds” would work for me. I put a few on a small patch of soil that I had turned over and even thought to put up a bit of fencing and bird netting. As it turned out, clay and rock were not the best for trying to grow food, but those seeds prevailed! It did not matter that all I got were a few cucumbers – I was hooked!

Like when I play chess, now it was time to get serious and set up the board. It was me versus the dirt, and the dirt had a head start. Rocks were just as plentiful as potholes in Pennsylvania, and I liked to think I was smarter and worked harder than rocks. So instead of tilling clay and rock, I raised the stakes and raised the garden into beds. A single raised bed just would not do – I was going to have a dozen raised beds filled with multiple types of compost: horse and cow manure, chicken manure, worm castings, mushroom compost, and composted leaves and grass clippings. Then I added vermiculite, perlite, and peat moss to the earthly brew. It was quite the concoction to mix on a huge tarp in the backyard. By the time I was finished my skin was nearly indistinguishable from the dirt.

I experienced true excitement as I planned out the area that would house my twelve beds. I envisioned bushels of beans and trunk loads of tomatoes. Noting the angle and arc of the sun, I plotted out the four corners and cut lengths of weed matting. Channeling my inner carpenter, I constructed my beds – some 4’x4’ and some 3’x3’ – and laid them on the matting roughly in a rectangle with spacing about two feet apart. Working in a smaller space like a garden box seemed to limit plant growth options, as if my garden chess board could only be so big. Fortunately, I took inspiration from Star Trek and Mr. Spock’s three-dimensional chess game: instead of gardening wider, I would garden vertically. I filled all the garden boxes with my fertile mix and mused to myself that perhaps I could grow an extra arm if I played in that dirt long enough. With all my beds filled, supports in place, and seed in hand, I felt smarter than a box of those Pennsylvania rocks.

However, nature did not just include the inorganic leftovers from the Allegheny Mountains. Living things like ground cows (groundhogs), trash pandas (racoons), tree rats (squirrels), grass rats (rabbits), along with bucks and buck bait (deer) also lived in the nearby woods and enjoyed eating things that I grew. I discovered this in my first season shortly after seeds started coming up. Undeterred, I once again began to handcraft what would become wood-framed cages with chicken wire. A cage was made for each bed and I was certain that I had outsmarted the four-footed thieves – until I discovered ground cow had somehow made it in a box and dug out a new home amongst the beans.

Clearly, I was dealing with above average animal intelligence. Either that or the rocks were smarter than I thought too. I had made my moves, and the critters had made their countermoves. It was time for a new plan. Instead of cages for each box, I would fence in the entire set of raised beds. Over the years this simple addition to the garden was probably my best idea. It had the added benefit of keeping out the rug rats. I did have to add chicken wire around the bottom half of the wire fence because baby grass rats could hop and fit right through the original fencing. I figured that out the morning I went to pick cucumbers and found myself eye-to-eye with an incredibly surprised cottontail. Chasing him out of the vines, I watched him go right through the fencing.

So, the next play was to re-do the fencing by going post by post and lowering the wire into the trench I dug along the fence line. This change seemed to work well for a while, but over time with rust and erosion it was no longer buried. Plus, there was the obvious problem of not being able the bury the part of the fence that served as the gate. I was quite sure that omission is how I ended up with two litters of rabbits in my strawberries. Amazingly, the mother rabbit never seemed to eat a lot in my garden. I only lost a few carrot tops while she hid her babies somewhere that seemed safe. Little did she know that I nearly drowned the first litter when I was watering since I had no idea they were in there.

Even the deer stayed mostly away. There was one season when a doe and her fawns hopped the fence early one school morning. My son threw open the sliding glass door and ran outside yelling at them to get out – which the doe promptly did by gracefully jumping back over the fence and disappearing into the woods. But those poor fawns did not know what to make of the noisy two-footed thing waving its arms. They looked like a couple of pinballs bouncing off the sides of the fence desperately trying to find a way out. We opened the gate, and they were off in a flash. I figured word must have gotten back to the herd because deer have never hopped the fence since.

Trash pandas and tree rats were the least worrisome pieces on the board by far. The racoons generally were more interested in the neighbor’s trash than anything I grew. Although I never caught the squirrels inside my garden fence, I knew they went in there because every spring I found acorns growing into oak trees in several of my garden boxes.

Then there were the ground cows. Once they discovered they could push under the fence, it was a constant battle to keep it patched and tamped down. Of course, I realized - in the famous words of Bugs Bunny: “This means war.”

I learned that they have excellent eyesight, as they would spot me from across the backyard while I was still indoors working in my kitchen. I would watch them. They would watch me. If a ground cow moved toward the fence, I would open the sliding glass door. They knew that sound meant I was coming out. I had one ground cow that would wait and hide in my raspberries along the tree line. When I turned my back, he made for the fence. If I did not catch his trespassing in time, he would devastate whatever tickled his palate.

Last summer’s war did not end until I brought in a humane trap which the varmint had never seen. I set it up near his favorite spot. I would glance outside while I was making dinner to see if ground cow would take the apple bait. Then it happened – I looked, and the trap was empty, turned to stir something on the stove and then looked back – and just that fast the groundhog was in the trap. He had been watching to see when my back was turned. When I went outside to view my prize, we looked at each other with grudging respect. I might have taunted him a little bit. He had won many battles. But now he was going to a faraway piece of fresh real estate.

I take care now to leave some things to decay in my compost pile that turn into volunteer plants in the spring. Sometimes I just plant extra seeds near the tree line. If I can leave some unprotected food growing away from my garden, I reasoned that perhaps the critters would just eat that. I much prefer to snip my lettuce, beans, peas, and tomatoes with my trusty garden scissors than find them partially or totally eaten. After all, being a little creative with dirt and fence led to more than just a few cucumbers. It led to the art of the garden war. It was rotating plants like moving pawns. It was sacrificing some plants like chess pieces to protect others. It was good defense with the right amount of offense to ensure the harvest. And it was checkmating the ground cow king.